The modern online newsroom is a 24/7 operation. It needs power tools to work efficiently, like modern carpenters need electric drills to build houses. The problem is that most content management systems, including web-native ones like WordPress, Tumblr, etc, are intended for smaller organizations or slower-paced writing. Which is why I’m so interested in Vox Media‘s Chorus.

The rest of us have been stuck turning screwdrivers. Features from last decade like admin interfaces full of buttons that need to be clicked, as well as heavy metadata entry requirements, static site designs, and weak distribution options. Chorus has evolved to solve these problems, and much more.

Christened with the new name last month, the four year-old platform is now much more than a CMS. It comes with nearly every tool that’s needed for publishing, all tightly connected. And it’s already powering hundreds of SB Nation sports fan sites around the country, plus our gadget-oriented pseudo-competitors over at The Verge, forthcoming gaming site Polygon, and whatever else Vox decides to launch (I’ve heard there’s one coming about cars, for example).

Chorus’ core is actually based on nearly a decade of experiences. SB Nation started in 2003 with many of the same features as any other CMSs, like posts, user profiles, comments, photos, and basic stats, but the company had to adapt to its user-driven network. The solution, one that I believe we’ll see more often at top online publications, was to create a tight development loop between developers and writers. 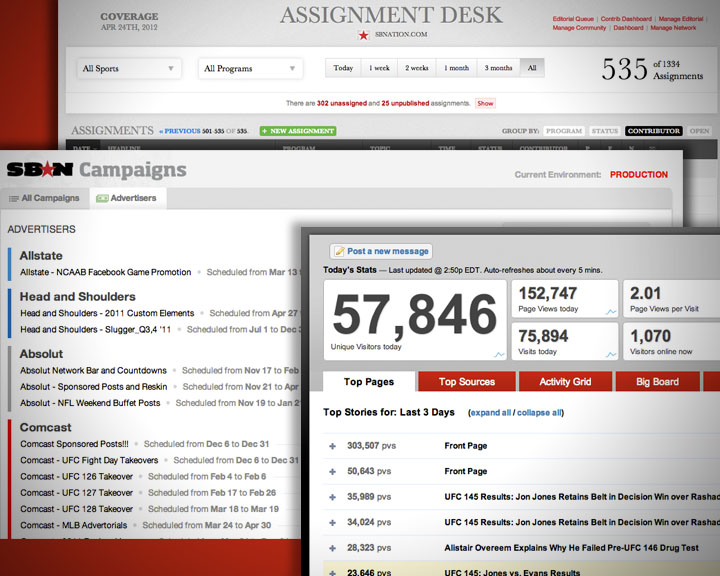 “We don’t throw things over the fence,” explains Trei Brundrett, the company’s vice president of product and technology. “We map our development plan around the tools that our editorial and advertising teams tell us they need, and then rapidly evolve the product based on data and feedback.”

He recently gave me a guided tour of the product, which I’ll sketch out below. Among many stand-out features, there’s full-fledged forums, an editorial workflow system, a streamlined article page that automatically includes some links and other metadata, a variety of options for laying out posts and advanced stats tracking features.

Really, the biggest question in my mind around the company is revenue — and my doubts may very well be proven wrong.

Because it was quickly launching new sites for unique communities — a college football team at a big state school, for example — it needed federated yet open access for community members.

The identity system lets anyone create a user ID, then for any of its sites, administrators can convert commenters into authors, and comments into posts. Beyond the usual set of commenting features — threads, upvotes, etc. — it also auto-updates with new comments, flags possibly offensive ones, and comes with a big set of hotkeys for power users.

Administrators of a given property can also carefully gate users. So, the fan-writers running the Yankees site could prevent Red Sox fans from coming in and trolling posts about Derek Jeter. 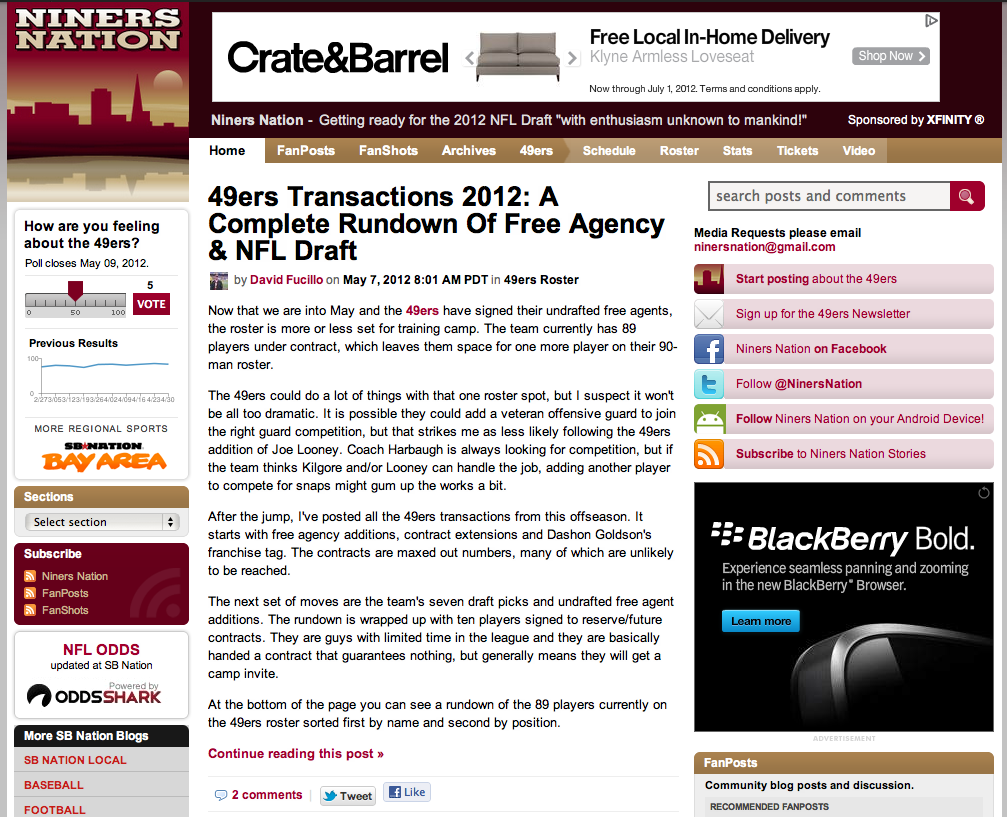 Admins, who are themselves designated by senior Vox editors, also get a full back-end system for moderating comments, including the ability to see and block IDs based on IP addresses, or promote users based on recommendations from other readers.

Today, any new site that launches on Vox comes with these hardy, field-tested community features, whether it’s about MMA fighting or video games.

Another early problem faced by SB Nation was planning coverage across sports seasons and big events. The solution visible today is a sophisticated tool for assigning and scheduling stories, that syncs with the user ID system and the publishing tool. For those of you who don’t manage publications, this problem might not be obvious. But the way most of us who do are handling assignments these days are through whiteboards, spreadsheets, general-purpose management software like Basecamp or Asana (in my case), or through clunky legacy programs (in the case of many newspaper editors).

Vox makes it possible to assign even a commenter a story, then write it, have it edited and then published to the site within a single interface. There are no issues with integrating between software programs. Having cofounded a startup that was trying to solve this problem with our own editing and workflow tools back in 2005, I’m very aware of how much more efficient it is to have a single system like this.

One of the most maddening parts of publishing online today is all the data entry related to a story — adding links to previous articles, tags, categories, images, and any other  non-writing elements within the text editor. This process often takes up more time than writing the story itself, and the only solutions I’ve seen have been half-functional plugins.

Chorus appears to crush the competition here. It automatically checks words, including a semantic comparison for related types of terms. “If you mention ‘Derek Jeter’ and say that he’s very good, and is going to be the MVP, the software will analyze related text and tag the post with his name,” Brundrett explained as he showed me this feature in action during the demo.

That’s not the only way it saves writers time. A bookmarklet lets them save links to articles, photos and videos from around the web, then see a panel next to a story that lets them drag the content into the post.

On the topic of photos and videos, Chorus also has some careful solutions in place. The text editor includes a section that shows writers relevant licensed photos to use, whether from the AP, Getty or other services. It also comes with a streamlined photo editor to help writers crop images to their needs, and a tool for quickly uploading videos and photos that they’ve taken at events.

Finally, when posts are ready to go, writers get an advanced set of options for promoting through social media. There’s a promotion section for deciding whether to share with Twitter, Facebook, Google News and other sites.

The main elements of the user-facing web site, from the overall design to individual posts, come with a set of templates to quickly create an original look and feel. Writers quickly create spacious, image-filled articles (like this Verge spread on jet packs). And editors can easily pull in widgets including polls and photo galleries to add more engaging content. 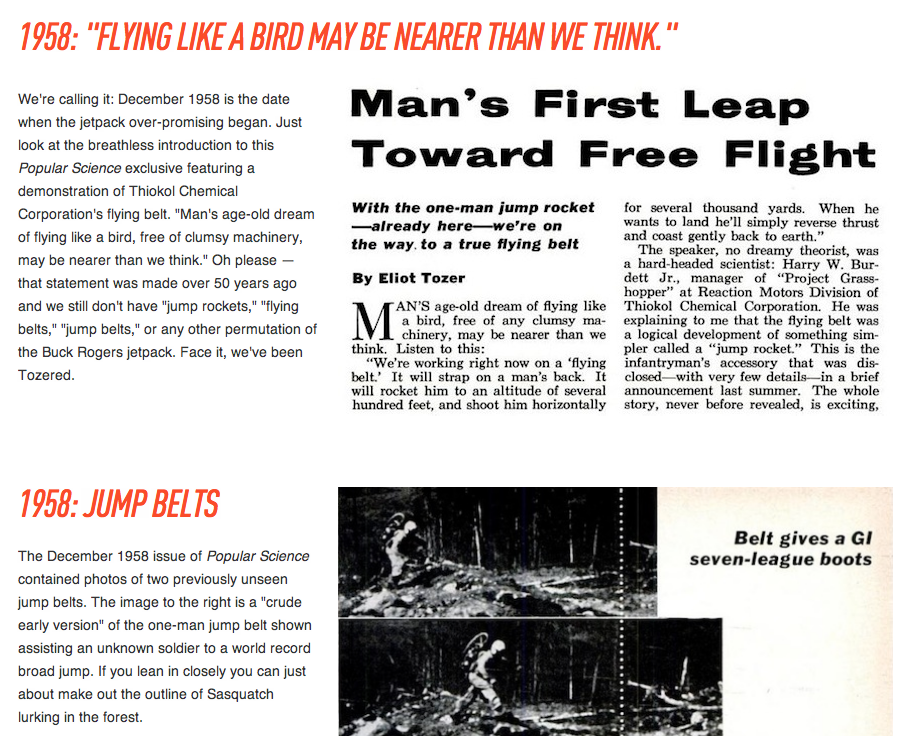 There are also specific iterations available for sites with special needs. StoryStreams, for example, is a template that Brundrett’s team built at the request of sports editors, that provides real-time updates to the home pages of sites (see our coverage from last fall). Readers can just keep a page open and watch for updates instead of having to constantly refresh the page.

The commenting system is another example. Readers were using the section so much that they demanded shortcut keys for faster navigation. That’s what every Vox site comes with today.

In addition to hooks in with Google Analytics, there’s a simplified dashboard that lets editorial staffers see how each story is doing. But there’s also a special part of the site, where Vox shows editors how stories might do in relation to a big news cycle. For the NBA draft, for example, it analyzes its own data from past years, public sources like Google search trends, and other sources that Brundrett wouldn’t reveal, and suggests dates and times for certain types of stories to be published.

A lot of this may be intuitive to experienced editors, or deducible via careful analysis of other analytics tools. But the fact that it’s immediately available within the same system as everything else means teams can make quick, smart decisions related to traffic goals without having to go data mining.

Now, for the business model(s).

The main way that Vox is making money is ads. But, the company is able to offer something many others aren’t, which is increasingly large volumes of users who organize themselves by very specific interests. When the dozens of SB Nation football blogs cover game days in detail for each team, it’s a no-brainer for a beer company — Guinness, in the example above — to wrap itself around that branding. Literally, as you can see. There’s a background takeover, a top banner, a main ad to the right, and then the “presented by” branding around NFL Game Day. And, a contest for fans to engage with as they’re reading and commenting.

Another example, with a more direct editorial tie-in, is a “Core Of Sports” themed set of posts that goes along with a recruiting campaign by the U.S. Marines. The series covers professional athletes who have also served in the corps.

The internal slogan, chief executive Jim Bankoff tells me, is “substance is viral.” If you create the right kind of content for users, and wrap appropriate advertising around it, they’ll spread it themselves.

“We have had a lot of success scaling our advertising model (5x growth in two years) in large part due to our tech platform,” he goes on to explain. “Our platform enables us to create, manage and track these high impact, customized ad campaigns at scale. The same back-end that powers the edit content also allows us to create ad campaigns, run them in our network, track and monitor and report against them in valuable ways.”

The business model is a big indicator of Vox’s ambitions as a company. Even if it is still able to charge relatively high ad rates around its targeted content, it still needs huge scale to be able to compete against traditional media and the rest of the web (including TechCrunch’s parent company, AOL). It will need to continue to grow traffic to become one of the larger media companies out there in order to attract ad dollars — which, again, is why having such a high-tech editorial software platform is so crucial. 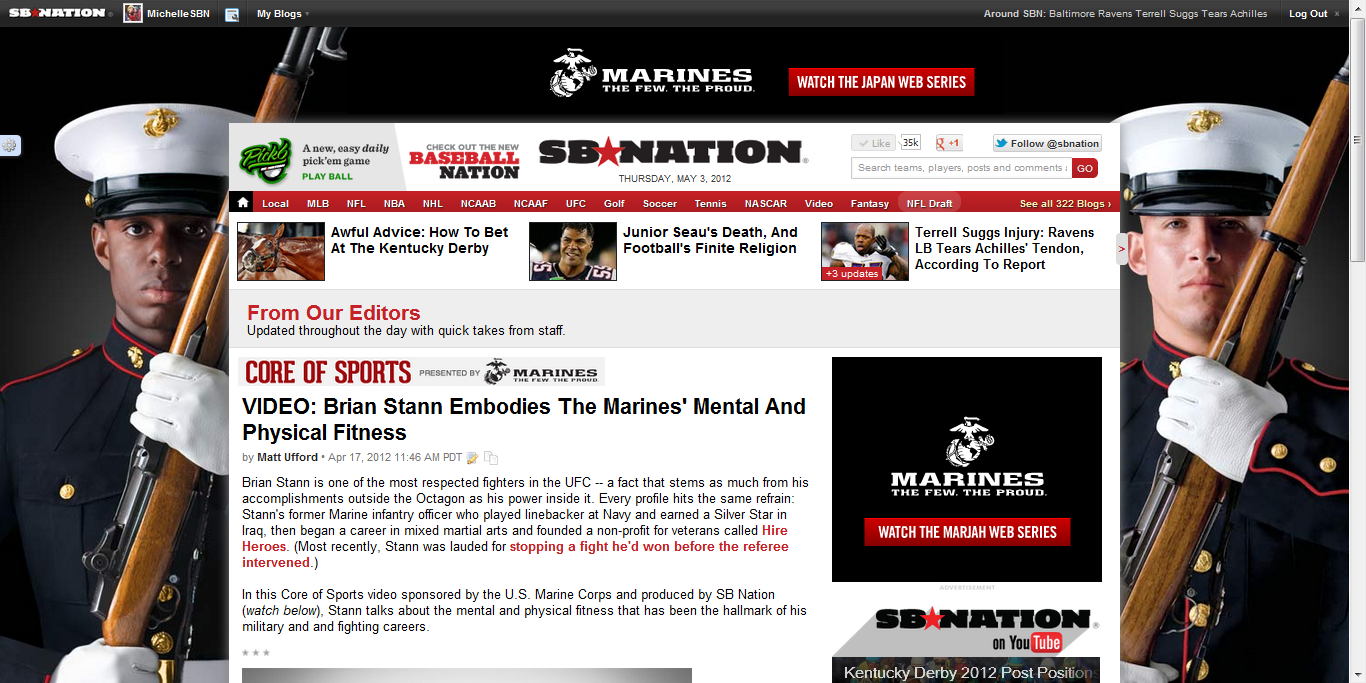 That said, there are also some interesting opportunities for Vox as it expands into other revenue streams. Reviews of products, like gadgets or cars, are natural sources for attaching affiliate links to. And, there’s always the potentially lucrative but time-consuming conference business that many blogs (like this one) do to help make money.

Software In The News

Just as a carpenter needs to apply a power drill with skill in order to build a great house, an editorial operation needs top-quality writing and organization to be successful. Software is just one of many crucial elements.

And there are plenty of other great tools out there. Tech companies large and small specialize in products that can meet the needs of big newsrooms. Some examples of what I’m using are Chartbeat, which provides real-time data on site traffic, and Asana, an especially streamlined task management tool. Newsrooms without the resources or time to build their own tools have the added challenge of stitching third-party services together, but get the benefits of each company specializing in making its product best-in-class.

For example, WordPress VIP, which we use at TechCrunch, requires a good amount of customization on the part of the publications that use it. But it also serves as a platform for all sorts of plugins to add new functionality. And we can build our own tools on top.

Still, having gotten my behind the scenes tour of Chorus, I am very impressed. This is a next-generation platform, and many publications live on publishing platforms from past decades.

Both competing publications and the software companies who build products for them will need to think about how they too can create tightly-synced software suites to optimize the publication and distribution of top-quality content.