Facebook thinks mobile messaging should feel like you’re having a face-to-face conversation, so today it updates its Messenger for iOS and Android apps with the ability to see if someone’s read your message, and easier ways to tell if someone’s typing and where they’re messaging from. Facebook Messenger “read receipts” are even easier to understand than those long-found on BlackBerry Messenger, and they work for group messaging too. The apps now display “Seen by Peter, Josh, Justin” right under a sent message.

Director of Product Peter Deng tells me “SMS has been around for 20 years, built it was for these T9 phones. We’re focused on leveraging all the capabilities of today’s devices to create a new messaging experience.” (Update: Unfortunately, Peter Deng doesn’t actually talk like Yoda, and his quote was “but it was built for these T9 phones”) He also says these are just the start of app updates designed to make mobile conversations feel more real, as if you had body language cues and more to go by. The read receipts definitely accomplish this, as you won’t have to send any “did you get that?” messages or wonder if someone missed you message, or read it but just didn’t respond.

Today’s updates are “mobile first”. They’ll start by appearing in the standalone Messenger apps, and slowly roll out to Facebook’s primary mobile apps and the web interface. This underlines Facebook’s goal of a smooth transition away from being a web-focused company. Nimbler competitors in mobile are something critics see as a big risk to Facebook’s future. Two big mobile acquisitions, Beluga last year which was reformed as Facebook Messenger, and most recently Instagram, may both prove key to getting Facebook to travel with you everywhere. 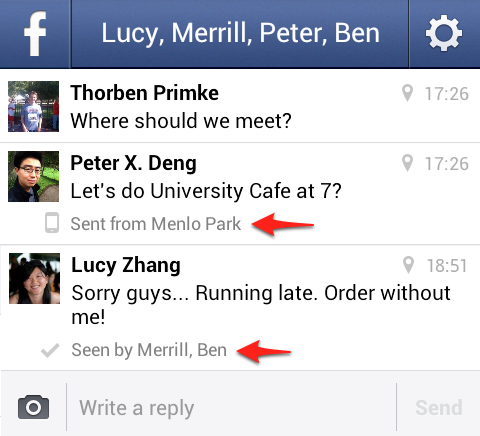 Beyond read receipts, you’ll now see the name of town or city from which a message was sent in-line if your conversation partners have location enabled. This improves on the old colored blue arrow next to geo-tagged messages that had to be tapped to actually show location. And Facebook has replaced the ambiguous “three dots” real-time typing indicator by showing in-line the name of who’s currently typing a message to you. 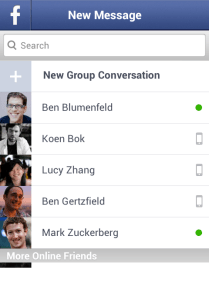 It’s easy imagine how useful these improvements could be. If you message someone “I’m outside your apartment to pick you up”, you’ll know whether they read it and are just on their way down, or if you should ping them again. And if you’re coordinating a meetup and get the message “We’re on our way” you’ll be able to instantly tell where from.

My biggest gripe with texting and group messaging is the awkward exchanges that arise because you can’t see how people are reacting. Send someone flirty and after a few minutes of no response you start to worry “Oh no, am I creepy? Did they read that and get weirded out?” when really they just didn’t see it yet. Interrupting one-another and having to constantly ask someone’s whereabouts are other annoyances.

Some may worry it will be harder to ignore people now. They’re right. A subtle mantra coded into Facebook is that you should be authentic and own your actions. There’s no way to turn off read receipts, but Facebook does let you click the location icon on messages to hide your location if that’s the kind of privacy you want.

Facebook wouldn’t comment on leaked screenshots indicating it may soon add video chat to its Messenger apps. That would certainly be another way to make conversations feel more face-to-face, because, well, they would be. It’d also fit with Facebook’s grander social design mission. Deng concludes “We’re building tech modeled after how people have been wired to behave for thousands of years.”