Startups do the darndest things. As you may or may not have seen, Y Combinator startup 42Floors made a bold and fairly unprecedented move today — as hiring goes, in any case. 42Floors Co-founder Jason Freedman had been following the work of UPenn sophomore Dan Shipper on Hacker News. The two had chatted a few times by phone and on Twitter, and Freedman was so impressed by the quality of Shipper’s programming, design skills, and smarts, that he decided to publicly offer the sophomore a job — via the company blog.

Why? Well, first off, it was likely to turn into publicity both for Shipper and for 42Floors. So there’s that. It was also done somewhat with an ulterior motive. As Freedman says in his post, the team believes that “hiring is dead.” And he has a point: If you’re looking to hire the kind of talent that is out there actually building products, companies, etc. (and who isn’t?), those men and women likely aren’t filling out job applications. So if you want them, you have to court them.

Of course, when it comes to courting, there’s more than one way to skin a cat. 42Floors went with the public, honest, flattery approach. Freedman knew what he was getting into — “it may take us three months or three years before we get Dan to join us full-time … These things take time and perseverance” — but the startup is about to announce funding. And new capital means hiring, scaling, and building.

Like every other startup out there, 42Floors wants to have the best talent on staff to help them build something that’s better than the rest, but, in the industry we live in today, even with capital, the competition for top talent is fierce. And young companies can’t be competitive when it comes to salary. So, what do you do? As Freeman implies so intuitively, if you can’t compete based on wages, or equity, you compete with what you can.

In the case of Freedman and 42Floors (and many others in the same boat), it’s “personal development,” it’s making it known that you value their talent, what they’re capable of, and want to help them reach their goals — while contributing to yours, of course. You have to be willing to invest more than just money in talent, and if you don’t have the money, you have to work even harder — even enjoy (gasp!) — cultivating young talent when you find it.

Freedman believes there’s a war for talent out there, and he’s not wrong. Few will tell you that, with education beginning to change, with talent existing and developing in and outside of the classroom, there’s plenty of talent out there that doesn’t have a Harvard or Stanford Business School degree. And in many cases, that talent may even be superior. But, this landscape requires new ways of thinking about hiring, evaluating non-traditional talent, and convincing these men and women to come on board. Smarterer, Gild, Bullhorn Reach, Entelo, and solutions like them can’t launch (or grow) fast enough.

But, as to Shipper? In a way, his deciding to drop out of UPenn and join 42Floors would have been immediate validation of Freedman’s tactics and philosophy. We caught up with Shipper today, who tells us that, although the experience was both startling and humbling, he’s not ready to join 42Floors at this point. That’s partly because, unlike his friend and UPenn classmate Wesley Zhao, who’s part of the current Y Combinator class with FamilyLeaf, Shipper isn’t ready to drop out of school. He wants to finish his education if he can. 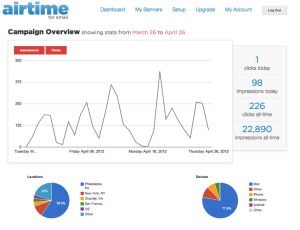 It’s also because he’s busy building a startup. Back in September, Shipper and two of his classmates founded AirtimeHQ, which they launched two months ago. Airtime, put simply, allows businesses to market their products via that valuable and oft-unused real estate: The email signature. Airtime offers users the ability to set up company-wide email signature marketing in 30 seconds, with flexibility — in that signatures change based on device, and users can optimize and modify email campaigns on the fly. Oh, along with offering integration with both Outlook and Google Apps.

What’s more, Shipper says that the startup already has 200 businesses signed up and using the service, and have integrated with over quarter of a million emails. The co-founders will be staying in Philadelphia this summer when classes get out, and will be working on Airtime. Shipper says that he has no idea where the road will take them, but they want to take a shot — see if they can reach critical mass. So, simply put, he’s more focused on building and following the entrepreneurial path than joining another company — and he’s certainly not alone. The UPenn sophomore says that he’s definitely open to the idea of joining 42Floors in the future, but that it all depends on what happens with his startup.

While it’s not the ideal result for 42Floors and Freedman, it’s good to see young engineers and designers just getting down to it — and building. Of course, if you’re of the same mind as Sean Parker, Shipper is (in a way) demonstrating a part of the problem. Speaking at the Techonomy Conference last November, Parker said that the industry is overcrowded with small startups. And because there’s so much capital going around, many of these find funding. Although many of those will fail in the end, in the short-term it makes for a talent drain.

So this line of thinking goes, in the end, many of these entrepreneurs could have more of an impact at places like Facebook, or Twitter, but they opt instead to start their own businesses. Then, they, in turn, have trouble finding top talent as they scale because it either gets bought by Facebook for more than they can pay, or the talent, like they did themselves, goes off to found its own venture.

Needless to say, what started off as a move made (in part) for free publicity, in the end becomes a catalyst for a conversation about how to address the talent drain in technology, and what startups and founders can do to help themselves get ahead in the race for talent, even if they don’t have the money or equity to win outright. As always, entrepreneurs without the big bank account have to do more with less, and find better, savvier ways to get what they need.

42Floors may not have gotten a new employee, but they at least got his attention, made their goals transparent, and in so doing got a fan — and potentially a future customer or partner. That’s smart hedging. So, perhaps, in the end, Freedman got what he wanted anyway.

Please join us. Consider this a job offer to work at 42Floors. Because you have never applied for this position, this may come as a little bit of a surprise. But you have known for awhile that I have been really impressed with your work.

You’re only a sophomore in college, but you’ve already started several companies. You’ve taught yourself to code, and you are a maker at heart. And you have that rare gift of having a sense of style in your design work as well. AND, your blog posts that reach Hacker News are eloquent and well thought out. It would be an honor to have you join us here at 42Floors.

Here is your job description: You will make gorgeous products that help entrepreneurs find their dream office. There are dozens of things we need built — you will pick what you most want to work on or come up with your own project.

If you ever decide you want to go back to working on your own startup, you have my full support, and I will personally do everything I can to help you be successful as an entrepreneur.

You will never be asked to sign a non-compete. You will be free to contribute to open source, free to blog about anything and everything, and never be required to submit a patent that could be used offensively.

This offer has no expiration and, regardless of whether you decide to work with us, I hope to personally be there on your side in everything you do.