One thing that has been remarkable about Facebook is its willingness to expand in developing markets that many other consumer Internet companies would otherwise write off because they’re hard to monetize.

Net income is actually down 12 percent year-over-year to $205 million from $233 million a year ago. 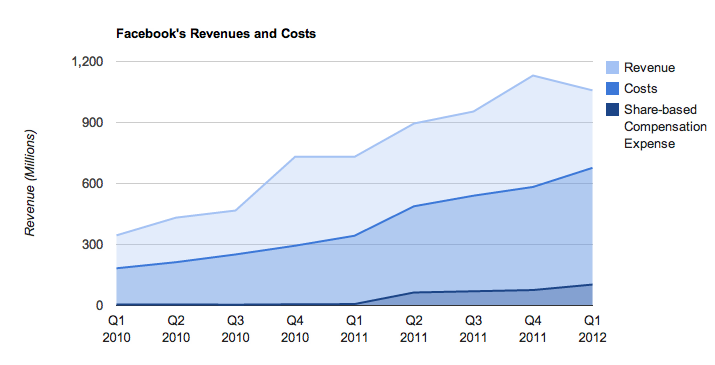 What gives? A couple of things:

1) Share-based compensation is a huge part of it. These expenses came in at $103 million for the first quarter, up from $7 million a year earlier. If you take it out, operating margins are still down year-over-year, but not by as much. Net income would actually increase overall from $240 million a year ago to $308 million.

This isn’t necessarily a one-off though. Below is what Facebook expects to pay in share-based compensation expenses for the next several years in the hypothetical case that the IPO happened on March 31.

After that, Facebook will have to find ways of continuing to attract and incentivize the best technical talent if there is no longer as much as upside to its equity. That will be expensive, considering the options that the best engineers have at growing companies across Silicon Valley. If Facebook can’t lure them away from other startups with stock, it will have to bump up the cash component of compensation.

2) Growth is happening in emerging markets, where revenue per user is lower than it is in mature markets like the U.S. Overall, Facebook’s average revenue per user (or ARPU) climbed 6 percent year-over-year to $1.21 in the first quarter, but that pace was weighed by growth in developing countries. Facebook says, “The sequential decline in ARPU in the first quarter of 2012 was affected by the fact that our user growth was higher in geographies with relatively lower ARPU.”

Is this a bad thing? It depends on how you’re thinking about it. In online advertising, the spoils will go to those who have scale. As a platform reaching 900 million users with very targeted data about pretty much all of them, Facebook is becoming a must-have for any online display advertising campaign (if it isn’t already).

Furthermore, the key markets Facebook is growing in happen to be some of the largest, fastest-growing economies in the world. Facebook had 45 million monthly actives in Brazil last month, up 180 percent from a year earlier. That gives them a penetration rate of about 30 to 40 percent in the country, according to the filing.

Facebook is also growing in India, where it had 51 million monthly actives last month or more than double what it was a year earlier. That may not sound like that much in a country of 1.2 billion people, but keep in mind that India has low Internet penetration. Plus, many of these users experience Facebook solely through their mobile phones, which the company hasn’t completely figured out how to monetize yet. Facebook estimated that about 83 million of its monthly actives globally use the service only through their phones last month.

Facebook also thinks of itself as a mission-driven company, which exists to connect everyone in the world. You can debate the sincerity of those intentions, but getting every person on the planet connected to the network is what the company intends to do.

3) Overall growth in headcount. Even if you take out share-based compensation, Facebook’s costs for building and maintaining data centers and then hiring extra sales employees and engineers are rising at a faster pace than revenue is growing.

Cost of revenues is up 66 percent year-over-year, mostly because of data center costs. If you look at marketing and sales costs, those are double what they were a year ago excluding share-based compensation. Frankly, this is the less scalable part of the business. Facebook needs to hire more sales and customer service employees as it adds offices around the world.

Research and development, or engineering, is also growing at a faster pace than revenues. But not by as much as other departments are if you take out share-based compensation expenses. Engineering is the jewel of the company. The company prides itself on having about 1 million users per engineer if not more, so like I said above, it will have to spend to attract the best especially after upside is fully priced into Facebook shares after the IPO.

4) Lastly, declining margins are natural as a company matures: Facebook actually says this in the filing. 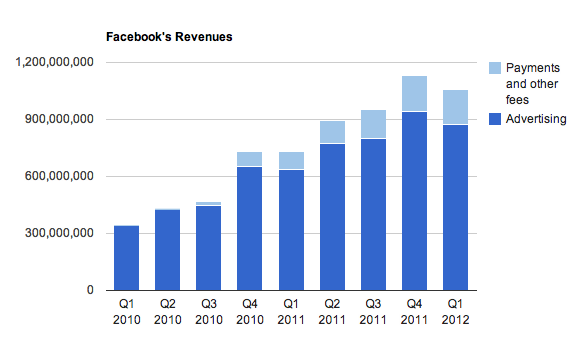 To grow advertising revenues, Facebook needs to do one of two things. It either needs to get more users. Or it needs to get its current users more addicted (I mean, “engaged”) and exposed to more ads that are better-targeted.

Right now, sheer growth in the user base is compensating for slow growth in revenue per user. Facebook said the average price per ad for the first quarter of 2012 was unchanged compared to a year earlier, although it increased in key markets like the U.S. and Canada. It actually declined in Europe because of a weak local economy there. It’s not a great sign that ad prices are actually declining in mature markets like Europe.

But Facebook also has some remarkable cards up its sleeves. With “like” buttons and more scattered about the web, Facebook could launch a web-wide display advertising network. The company has never confirmed this, but it’s a painfully obvious opportunity.

Payments revenue is maturing for gaming apps, so the question is where will it grow next? While payments and other fees revenue is almost double what it was a year ago at $186 million in the first quarter, it’s not really clear that how much this can climb unless Facebook pushes Credits for other types of apps. Payments and fees revenue is flat on the quarter. Because I hear about the exact same seasonal trends in revenue for apps on the iOS and Android platforms, that by itself isn’t that worrying.

What is concerning is that revenues for casual games on the Facebook canvas are maturing. You can see a very visible quarter-over-quarter slowdown in Zynga bookings, but I also hear about it anecdotally from many second and third-tier developers who frankly don’t find the Facebook canvas as attractive a place to be anymore. There are only a handful of sizable gaming companies that are making noticeable investments Facebook canvas games like Germany’s Wooga, King.com and midcore developers like Kixeye. Many others are simply moving off toward iOS or Android.

The easy days of high virality and fat profit margins are over for Facebook game developers. It’s becoming more about making real, high-quality games. Growth will either come from non-casual games like the ones made by Kixeye, or it will have to come from other kinds of non-gaming apps. Facebook acknowledges this, saying, “We may seek to extend the use of Payments to other types of apps in the future.”

Since Facebook made Credits mandatory for canvas games last July, It would be ideal if Facebook could start a big push for payments in other types of apps around the same time this year. That way the company can show favorable year-over-year growth.