So if Facebook maintains its current revenue rate, it would make between $4.69 and $4.81 on each of its 901 million users each year. Read on for more on Facebook’s business, user counts, photos, apps, employees, Instagram, and to see our embed of the full amended S-1.

Payments are becoming a larger part of Facebook’s business, with advertising accounting for 82% of business at the end of Q1 2012 compared to 87% at the end of Q1 2011. However, Zynga is becoming less important to Facebook, as the percentage of its revenue derived from that single game developer decreased to 15% from 19% a year ago, as Kim-Mai Cutler details. 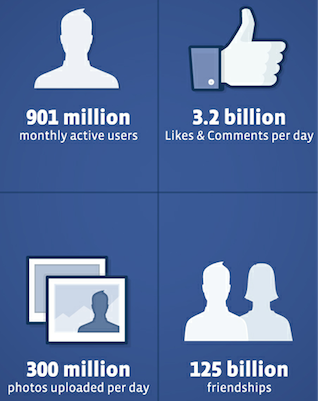 Despite Mark Zuckerberg remarking about the Instagram acquisition that “We don’t plan on doing many more of these, if any at all”, the amended S-1 notes that a lack of similar companies to acquire could actually be a risk: “Our ability to acquire and integrate larger or more complex companies, products, or technologies in a successful manner is unproven. In the future, we may not be able to find other suitable acquisition candidates, and we may not be able to complete acquisitions on favorable terms, if at all.”

Facebook will pay Instagram a $200 million termination fee if government authorities prevent the acquisition from being completed. If Facebook’s shares end up trading at or above the $44.10 price they were moving at in the final SecondMarket auction before the IPO, Instagram’s team and founders could end up with $1.314 billion — much more than the $1 billion quoted for the acquisition.

It will IPO on the NASDAQ. It now has 526 million daily active users, up from 483 million at the end of 2011. In March 2012, Facebook had on average 398 million users who were active on at least six out of the last seven days. On average, Facebook earned $1.21 on each of its users this last quarter.

Its mobile interfaces gained 12 million monthly active users just since March when Facebook listed 488 million monthly users of its mobile products, and now has over 500 million. However, mobile growth is slowing, as it was up 33% from the end of Q1 2011 to the end of Q1 2012, whereas it was up 39% in 2011. Eighty-three million monthly active users accessed Facebook solely from mobile in the month ending March 31, 2012, up a big 43% from the 58 million sole mobile users in the month ending December 31, 2011.

It also listed today’s $550 million cash purchase of 650 patents from Microsoft, which had recently bought them from AOL. While it seems Facebook has built a strong enough fortress now that it has over 1400 patents, the amended S-1 still notes that “in the future we may acquire additional patents or patent portfolios, which could require significant cash expenditures.”

Facebook’s momentum wasn’t enough to push revenues above the especially high holiday quarter when brands make huge ad buys and users are flush with money and gift cards to spend on virtual goods. Still, the 44% year on year growth for Q1 2012 should assure investors that the social network’s not done growing its business even as it starts to runs out of users to sign up that are of age and don’t live in countries like China where Facebook is banned.. With 901 million users and 7.009 billion Earthlings, now one in 7.7 people in the world have a Facebook account.

Facebook Buys AOL Patents From Microsoft For $550 Million In Cash

Rather Than Pay Off Yahoo, Facebook Built A Fortress 1400 Patents Strong

Zynga Contributed 15% of Facebook’s Revenue In Q1, Down From 19% A Year Ago