While Google’s advertising cost per click fell 6% since Q4 2011, Facebook keeps commanding higher prices from advertisers with CPC up 23% in key markets during same period according to a study of the last full quarter before the social network is expected to go public. It seems the shift to mobile where users are harder to monetize hasn’t phased Facebook’s ad rates yet, which could make its stock very appealing come IPO day. Ads tool developer TBG Digital saw the average cost per thousand impressions (CPM) of the ads it runs on Facebook increase 15% over Q4 2011 and a whopping 41% over Q1 2011 in key markets.

The contrast between the performance of Facebook and Google’s rates could lead analysts to see Mark Zuckerberg’s company and its highly targeted, friend-infused ads as critical to the future of online marketing. And while Facebook only began showing ads on mobile at the start of March, its Sponsored Stories format could fit better on small screens than the traditional display and search ads Google relies on. 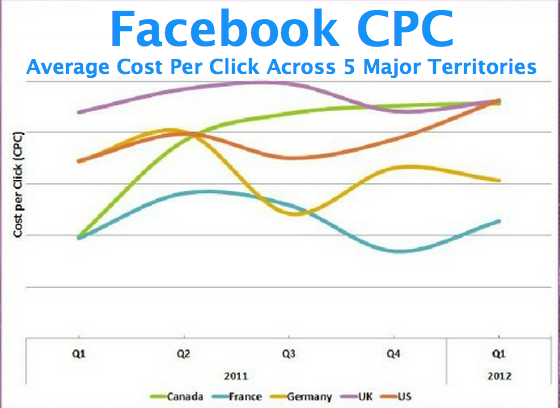 While Google’s numbers are across all markets and Facebook’s are just from one ad platform, TBG Digital, and are just for its five biggest markets, year over year Facebook’s CPC went up 28% while Google’s went down 12%. Now since Facebook has only begun to monetize mobile, lower prices there aren’t reducing its overall CPC as harshly as Google’s more established mobile ads business is being hit. 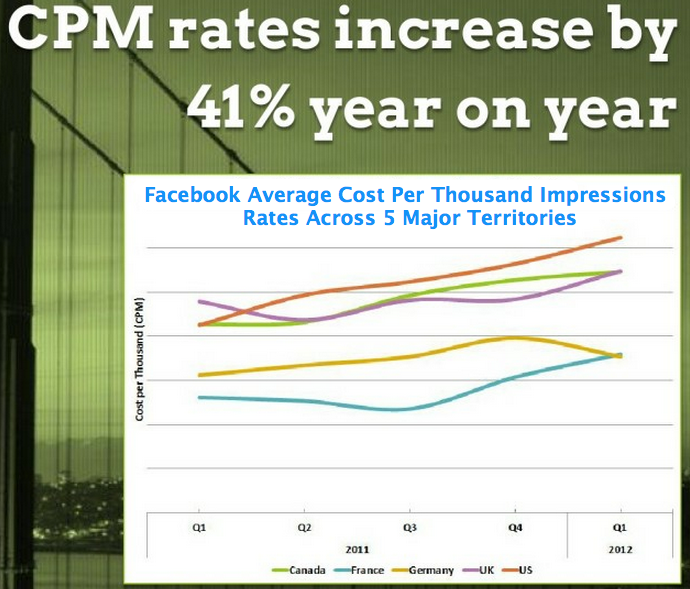 One negative finding of TBG’s study was that ad click through rates on Facebook are down an average of 8% in the U.S. and 6% across its five top territories. It’s not as bad as it sounds, though, as a year ago there were only four ads per page but now as many as seven can appear. This means attention from clickers is spread more thinly. Facebook needs to balance making ads prominent enough to secure clicks without trampling its user experience.

Other findings include that the click through rate of ads for Facebook news reader apps like The Guardian and Yahoo News increased 194% since Q4 2011.This shows that Facebook’s open graph reader apps that auto-publish news feed stories about what their users read are driving so much referral traffic and are enjoyed enough that news outlets are willing to pay to attain installs much the way social games have for years. Finally, competition for brand Page fans is getting tougher, allowing Facebook to increase the cost per fan through ads for Pages by 43% over Q1 2011.

TBG Digital conducted the study on 372 billion ad impressions in 190 countries for 235 of its clients across verticals since Q1 2011. The findings have been verified by the University of Cambridge Psychometrics Centre. Facebook has the power to manipulate its ad rates, so as it prepares to IPO it could be increasing them beyond what’s dictated by supply and demand to make more money and appear more attractive. Also, TBG’s data does not indicate Facebook’s ad performance across the long-tail of international markets, which aren’t necessarily faring as well.

Still, the fact that it can sustain higher rates with more users and more ads per page is a sign of health for Facebook’s primary revenue stream. We’re hearing that most brands are now dedicating significant spend to Facebook marketing, while they’re still hesitant about Twitter, Google+, and other social networks. If Facebook can convince investors of this, $100 billion could look like a low-ball valuation the day after it hits the NASDAQ.