Editor’s Note: Alexey Komissarouk is a CS senior at the University of Pennsylvania and founder of the PennApps Hackathon. This article is based on an earlier talk to the Wharton MBA Entrepreneurship Club.

“How many of you want to start a company?” David Tisch asked. All hundred hands went up. That’s why we were there, crowded into a Wharton classroom to seek startup advice from an industry luminary.

“Keep your hand up if you are technical.” Five hands remained. Maybe six.

“Keep your hand up if you are looking for co-founders.” The only remaining hand belonged to a CS freshman in the corner.

Most quality software engineers today have offers of amazing work environments and 6-figure salaries from the likes of Google and Facebook. Few are crazy enough to say no to that. Those that do typically have their own ideas, aren’t sure they need you, and have heard enough cliche pitches to ignore you by default.

Your odds are bad. If you don’t have a strong track record, your odds are terrible. Not a startup-is-a- mosquito terrible, ‘waste of your time’ terrible. So stop looking for a technical co-founder.

Focus on building your company instead.

Pre-dodgeball I went thru 3-4 years thinking I was going to meet some magical engineer who would build all the stuff I was thinking about. […] I’m still a really shitty programmer […] but I know enough to hack a prototype together.[1]

Pick up coding. It’s not that hard, and it pays off. How are you hoping to manage a technical team if you don’t understand what they do? Codecademy is the hip starting point for would-be coders these days, and there are more than enough resources available for picking up something like Ruby on Rails afterwards.

Really don’t want to learn to code? Hire an engineering team that has experience working with first-time non-technical founders.

In the fall of 2004, Rose withdrew $1,000 — nearly one-tenth of his life savings — and paid a freelance coder $12 an hour to mock up a Web page. He got a deal on server space over the Web for $99 a month.
— BusinessWeek story on Digg founder Kevin Rose

There’s a cottage industry out there of freelancers and development shops that take some combination of equity and capital to help you get to MVP.

That’s not the same thing as outsourcing. Many first-time entrepreneurs naturally gravitate to ~$15/hour outsourced labor, cheap as they can get.

“The problem with outsourcers is that to get a good job done, the level of detail you need in the spec often seems so high that you’re basically writing pseudocode. You can’t just give somebody a feature and say ‘make it awesome’. At that level of detail, you might as well write the code yourself.”
— John Collison, Stripe

Or, as James Goldsmith put it, 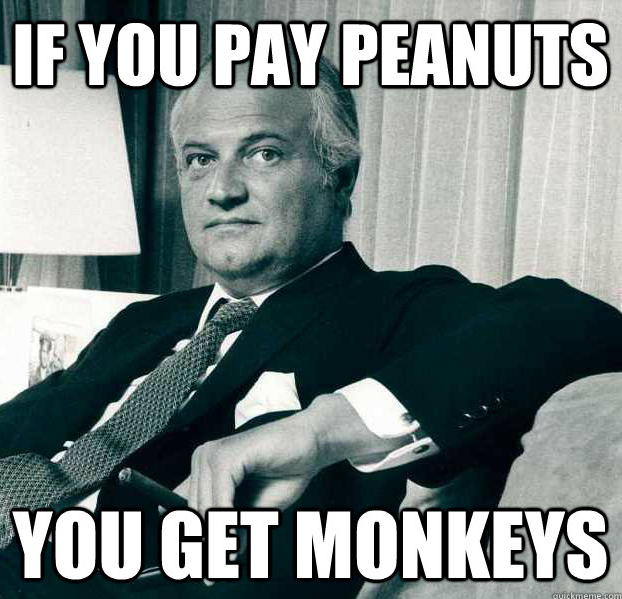 If you do pursue an external team, keep in mind:

External teams can be expensive. Want to get started faster and quicker?

At the start, we were running the site off WordPress, getting new users to subscribe via Wufoo and emailing the list into MailChimp. For the longest time, we held the thing together through duct tape and CSVs.

What existing infrastructure can you lean on to avoid having to write any custom code early on? There’s a lot out there: Weebly or Squarespace for attractive websites, Shopify for online storefronts and Mailchimp for mailing lists. DailyDealWorks even lets you start your own Groupon clone (inflated valuation not included).

If you can’t find a way to satisfy your MVP requirements with existing tools, stop and think about the kind of company you are trying to start. I’ve seen too many ex-Wall Street Wharton MBAs try to start something social-local-mobile, instead of playing to their strengths in finance and sales.

Bonus: once you are ready to start talking to potential co-founders…