Samsung teased the masses this past February when they revealed that one of their first Ice Cream Sandwich-powered tablets would be the Galaxy Tab 2 7.0, a decidedly mid-range device that seemed lacking in the style department. At the time, Samsung made it known that the Tab would arrive in the U.K. Before trickling down to the rest of the world, a plan that didn’t really pan out.

These days, Samsung has been a bit more forthcoming with details for the U.S. market, and the company has just recently given me what I’ve been waiting for: a price and a release date. The Galaxy Tab 2 7.0 will officially launch in the United States on April 22 with a pretty enticing $249 price tag attached to it.

I’ll be posting a more comprehensive review of the Galaxy Tab 2 7.0 after I’ve gotten the chance to play with it for more than a day, but here are a few of a my first impressions.

Despite having a slim plastic body, the Galaxy Tab 2 has a surprisingly solid feel to it. That’s not to say it’s particularly heavy — in fact, at 12.2 ounces it’s a shade lighter than Amazon’s Kindle Fire, which makes it very comfortable to hold with one hand. It’s also about as thick as the Kindle Fire, a fact that’s obscured rather well thanks to the device’s nicely-tapered edges. While I appreciate the Galaxy Tab’s build quality, there isn’t much to write home about when it comes to physical aesthetics. There’s no sex appeal to be found here, just lots of gray plastic and a few Samsung logos.

As I noted when Samsung first announced this little guy, the Galaxy Tab 2 7.0 doesn’t have the most impressive spec sheet you’ve ever seen. Nestled inside the Tab’s slim frame (and behind the 7-inch 1024 x 600 display) is a 1GHz dual-core TI OMAP 4430 processor, 1GB of RAM, the usual slew of WiFi and Bluetooth radios, an IR blaster, and 8GB of internal storage. If that’s just not enough space for you to work with, there’s also a microSD card slot embedded in the device’s left edge capable of taking up to 32GB of additional storage.

Despite being outflanked by its cousin the Galaxy Tab 7.0 Plus in terms of hardware, this little guy held up fairly well to my (admittedly unscientific) tests. It handled an extended bout of Minecraft without any major issues, and more graphically intensive games like Shadowgun were completely playable, if a bit jerky at times. Navigating through the device’s menus was generally nice and smooth, even after I loaded up my homescreens with a few of Samsung’s love-them-or-hate-them TouchWiz widgets.

That said, I still ran into a few hiccups during my day of testing — I would occasionally be booted back to the homescreen while scrolling through my list of apps, and the keyboard would mysteriously disappear while I was trying to set up the Peel Smart Remote app for a little veg-out session on the couch. 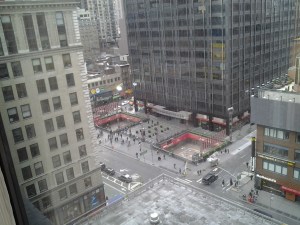 Tablets don’t always have the best luck when it comes to the cameras they’re graced with, and the 7-inch GalTab 2 doesn’t manage to buck the trend. It sports a 3-megapixel rear-facing camera, and a smaller VGA sensor right above its display, neither of which managed to blow me away. While I was in New York City meeting with Samsung to pick up the demo unit, I snapped this image in the Theatre District — it’s downright lousy, though it probably goes without saying that a tablet shouldn’t be your primary shooter.

It goes without saying that the Galaxy Tab 2 7.0 is no iPad killer (not that it’s meant to be), but its price tag and performance mean it could definitely give the Kindle Fire some competition for that number 2 spot. Sure, at $249, it isn’t quite as cheap as the Fire, but the difference in performance between the two is definitely noticeable, and barring any weird issues that could pop up over the next few days, I’d much rather own one of these.