Happy April 1st, Everybody! It’s that very special time of year — the day when tech companies break out their clown shoes to make their annual attempt at being funny. As a public service, we’ve rounded up every tech-related April Fools joke that we could find, and we’ve even separated the wheat from the chaff — highlighting the stuff that’s actually funny. The LOLs, the FAILs, the ROFLs, the WTFs. Just for you. We’ll update this throughout the day, and if we missed any, feel free to link to them in the comments.

(By the way, if you’re one of those folks who finds April Fools super-stressful because you’re constantly being punked, rest assured that TechCrunch would never do that to you.)

Google Maps — “We’ve long neglected one of the most popular computer systems ever sold, and I’m proud to announce Google Maps 8-bit version as our first product for NES.” The best part? Google didn’t satisfy itself with a blog post and video. The team actually built the damn thing, and it’s kind of gorgeous.

Warby Parker — “It doesn’t make sense to spend several hundred dollars on something your dog’s just going to eat.” So says Warby Parker co-founder Dave Gilboa, but that didn’t stop designer eyeglass startup from launching its own dog-focused spinoff, Warby Barker. In conclusion, OH MY GOD THAT PUG IS WEARING A MONOCLE.

Smashwords — The ebook distributor announced a new service for its writers, called Smashwords WEED. And even though WEED supposedly stands for “Writers Earn Extra Dispensation”, you can probably guess what it really means. Founder Mark Coker says, “Our mission at Smashwords is to make writers euphoric.”

Google Racing — You thought autonomous cars were cool? Well, you know what’s a lot cooler? Autonomous NASCARs. Google and NASCAR have teamed up for a partnership that takes Google’s self-driving car project to the next level. Check it out. Sergey is the new Jeff Gordon.

Hulu — Apparently, the “Voice of Hulu” had a rough recording day recently and somehow his outtakes snuck into some of the ad reels. (Link below.) Totally coincidental this happened on April Fools. Though these randomly pop into occasional ads today, Hulu assures us that you will indeed be able to continue viewing your regularly scheduled programming. Apparently he had too much Mountain Dew, or whatever it is that causes the green monster-ism that seems to beset this Will Arnett character.

Twilio — Your doorbell’s ringing. That’s right, it’s a singing telegram API from Twilio. Oh yes, thanks to Twilio, now you can actually send telegraphs — hand-delivered by Taskrabbit volunteers. No, but seriously. Twilio really does have a functional, fully-documented API with specs for your telegramming needs. That actually works. And is actually sent through their REST API and plays nicely with any language that speaks basic HTTP. Or, does it?

The Perfectly Adequate [The Rest]

Airbnb — Airbnb likes to brag about all the different kinds of spaces that its users can rent. Now, for a rate of $4,112 a night, you can book a stay on the International Space Station.

Animoto — The video-creation service announced Animoto for Dogs, where your pet can “tell you how he really feels.” Features include bark-activated uploading and songs only dogs can hear. Bonus points for some incredibly cute dog photos.

The Daily Dot — Not content with covering the news, The Daily Dot decided to get into the social sharing business with a site called CorkMarket. “Think of Pinterest but better!”

Flickr — The Yahoo-owned photo-sharing site now gives your photos the weirdly grainy, black-and-white look of an Atkinson Dither camera. “We’re rolling this test out over the next 24 hours and then out as the default look in the coming weeks! Photography started in black and white, and we feel it’s time to take photo sharing back to its roots. Welcome to 2012, via the 1980s.”

Gmail Tap — It’s “a new input method designed for the future,” where every letter of the alphabet is represented by a series of dots and dashes. Yes, those Morse code skills you picked up as a kid are finally going to come in handy.

Google Mobile Ads — If you’re a business owner, it’s time to GoRo with Google. After all, “Every day, dozens of Americans use rotary phones, but 100% of these potential customers have experienced trouble loading a business’ website on their device.”

Virgin Holidays — The vacation site has come up with a new currency tied to the British Pound that will be accepted by Virgin resorts and partners. Naturally, it’s called the Branson.

Zimride — The car ride-sharing startup is bringing a similar approach to bikes. “In the past, when you thought of numerous people on one bike, you thought tandem. But we were not going to let the structure of a bike stop us!” So why not drop an extra rider on the front and back of existing bikes? It’s all about efficiency.

YouTube Collection — You’ve heard of YouTube. You know, the one with the cat videos? Well, here’s the moment you’ve all been waiting for … say “hello” to The YouTube Collection. (Sorry, we should’ve told you to sit down first.) Yes, now you can experience web video like never before — on your DVD player! Watch a video on a mobile device, or on the Internet? What is this, 1997? That’s ridiculous.

Redfin — When it comes to buying a house, one thing you don’t want to do is take your time with the purchase. Or talk to anyone. Or make sure that the house exists. That’s why Redfin is offering 2-click home purchasing. So get clicking.

Hipmunk — Sure, flying on an airplane is cool, but as face-melting technology goes, we’re like totally over it. We also want some more destinations … no more of this “LAX –> JFK nonsense. Thanks to flight-booking service Hipmunk, now you can book yourself a spot on the Millennium Falcon. (Unfortunately, Chewy has already eaten all the peanuts.) They’re also offering options like hot air balloon, dog sled, rickshaw, African swallow, stagecoach, and other enjoyable ways to get to where you need to go. 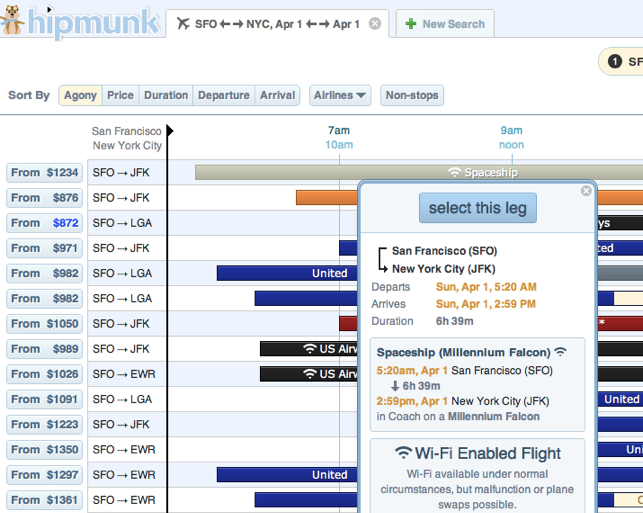 Reddit Timeline — What would the front page of the Internet be without the ability to share and view news from past, present, AND future? Reddit has placed a time-agnostic bar on its home page to let you peruse “timereddits” from the late Cretaceous Period, and check out the latest cat videos 42,000 A.D. Reddit has always pushed the envelope, and now they’re taking you into a worm hole. Reddit blog post here.

Atlassian — Guys, forking code is so yesteryear. Thanks to Atlassian, the makers of software development and collaboration tools, and their bitbucket team, we now know the best — and safest — way to practice pair programming. By spooning. As the peeps at Atlassian put it, “Spooning is a new way to boost developer happiness, and a better way to encourage pull requests. Spoon first, fork later.”

Think Geek — The site for the smart masses has a few great products that you should definitely check out, among them programmable tattoos. Good luck figuring out which are April Fools jokes and which aren’t. ThinkGeek.

Here’s last year’s round up, too, just in case you can’t get enough April Fools jokes.