Now it’s as easy as a fist-pound to pay a friend back for dinner, drinks, or a cab. Bump, the popular contact sharing app developer, today releases a new standalone iOS app called Bump Pay that lets you transfer money via PayPal to anyone in arm’s reach. But that’s also Bump Pay’s biggest limitation. Unlike Venmo where you send money to any phone number near or far, Bump Pay only works in-person.

The standalone app comes from Bump Labs, Bump’s experimental wing for trying out new features. Rather than risk complicating its 84 million-install flagship app right away, the developer will only bring money transfers to all its users if Bump Pay generates traction and delight.

To use the app, you just connect your PayPal account ahead of time, then type in the amount you want to pay, bump your iOS device against a friend’s, and confirm the payment. As long as you have a checking account connected to your PayPal, there’s no fee for the transfer. However, you’ll get docked a few percent if you’ve only got a credit card connected, and you can’t set up a new PayPal account from within the app. Your payment recipient also needs to have Bump Pay installed. You can’t send them money first and have them pick it up later. Finally, Bump’s technology has vastly improved over the years, but its apps still don’t always recognize each other on the first fist-clap. 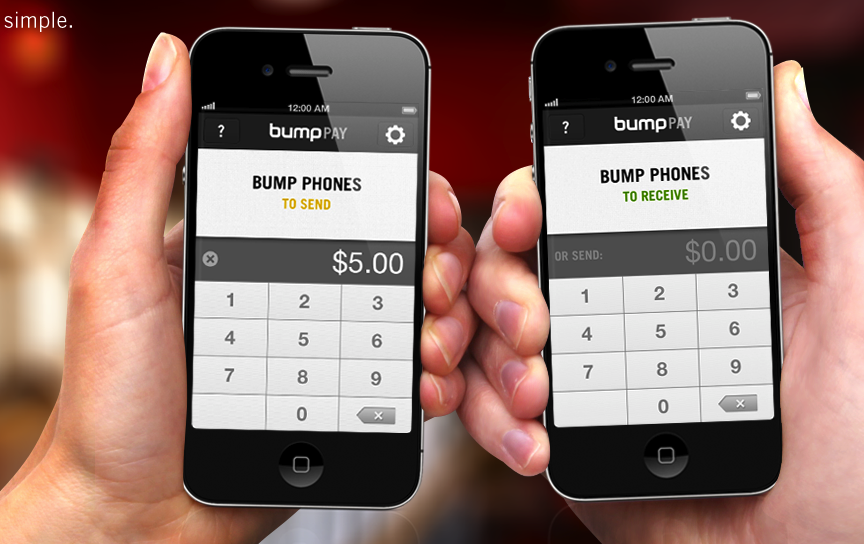 Back in 2010, PayPal was one of the first companies to try out Bump’s APIs. These allowed PayPal’s app users to initiate money transfers by physically colliding their phones. PayPal dropped the Bump functionality from the latest version of its app in the name of simplicity, opening a window for a dedicated Bump Pay app. Bump has the money to experiment, considering its $19.9 million in funding from Y Combinator, Sequoia Captial, SV Angel Andreessen Horowitz, and many premier angels.

I’m a big believer in peer-to-peer mobile payments, however Bump Pay is much more limited than my current favorite Venmo and other apps from banks like Chase. I understand the desire for a streamlined experience — I like that Bump stripped out music and calendar sharing from version 3.0 of its primary app, and CEO David Lieb tells me this “hasn’t adversely effected anything. Various internal metrics for confusion in the app have plummeted.” But Bump Pay’s gone too far, eliminating many core use cases by denying you the option to pay people remotely.

If my friend drops me off in a cab, rides it home, and then wants to split the final cost, I can’t hit him back with Bump Pay until we see each other next. By then we might have forgotten…or just Venmo’d or PayPal’d each other. Plus I don’t want to pay fees on peer-to-peer payments…ever. So compare the two flows of when I want to pay a new user:

Lieb tells me the reason behind the lack of remote payments is that “we found in our own use that when people weren’t with each other anymore, it’s hard to coordinate payment.” Personally I don’t find SMS that tricky, and I think the company may be too enamored with its software alternative to NFC. Still, I commend Bump Labs for trying something new rather than stagnating, and Lieb says there’ll be more products from its internal incubator in a few months.

Bump Pay could be the end of IOUs, and if added to the primary Bump app it could explode in popularity because Venmo is still tiny and doesn’t have an 84 million-install brother to piggyback on. Bump could dominate as soon as it realizes people can’t always sort out their debts right away.