Founder and investor Joshua Schachter has spent a great deal of time trying to solve the problem of not being able to easily find relevant things and people; initially with his first startup Delicious — which he sold to Yahoo for a reported $30 million — and now with his latest efforts at incubator Tasty Labs. Tasty Labs, which has $3 million in funding from Andreessen Horowitz and others, launched its first project (Jig) in August and has now come through with its second service, Skills.to.

“There are huge unsatisfied needs,” says Schachter, who says he is operating with a compass but not a specific road map on how to more efficiently connect people. He eventually hopes that Skills.to turns into something of a portable reputation system, “If you can make it easier to find people who do stuff, then you can tap into the whole world of people out there who are good at what they do.”

Skills.to is currently building up its dataset, so its core functionality consists of tagging people with skills categories like “angel investor” and “Xgoogler” or searching for skills like “iOS developer” which brings up lists of Twitter accounts tagged with that skill. Schachter isn’t quite sure what the end result of that process will be, but eventually wants to incorporate some sort of messaging system, either through Twitter DM or another solution. 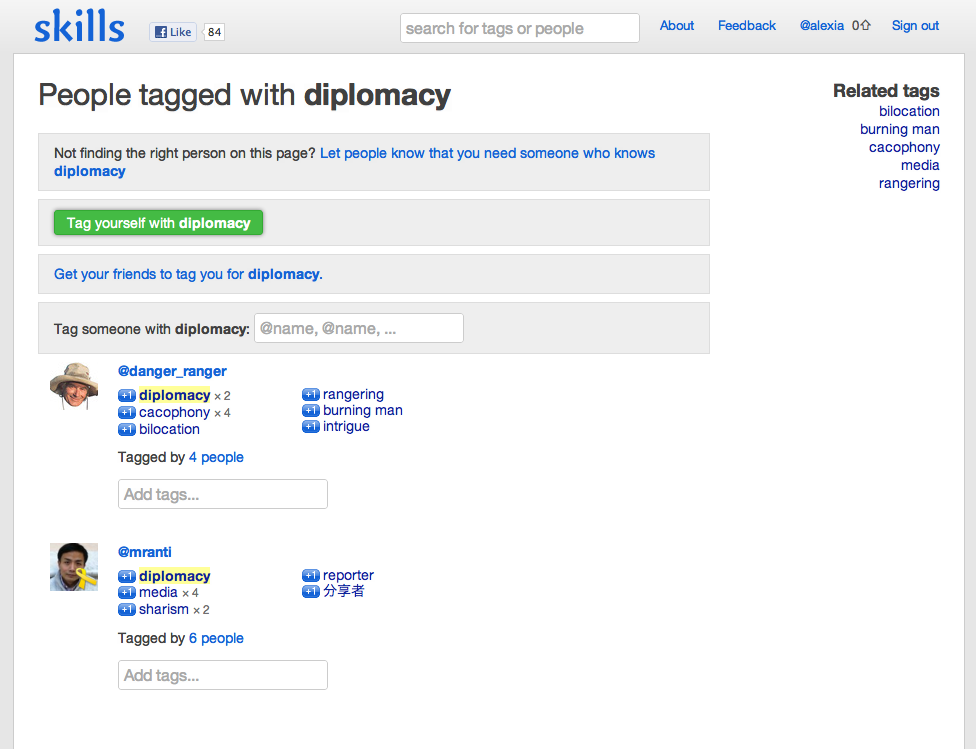 Missing a slick design and some obviously core functionalities, Skills.to is still in its beginning stages, and Schachter is using the iterations of this and Jig in order to learn in public about the “needs” market,”I’m a fan of development in public,” he tells me, “I don’t believe in doing eight months of development and then releasing a product.”

In the same space as companies like Vouch, the initial feel of Skills.to is reminiscent of Tagsona, an internal Yahoo tool used to find people working on similar projects. Schachter tells me that when user feedback is incorporated, the eventual scope will go beyond simple tagging. His eventual goal is not to build something like Klout, which is more about influence, but instead to turn Skills into a place where people can find who is “the best in the world” at a specific task.

While it’s obvious that Skills and Jig are not completely formed initiatives, Schachter’s objective in iterating on these projects is to explore the future of social software, creating products that move beyond “sharing software and witty comments,” and push people towards connection with a purpose.

With Skills specifically Schachter is focusing on catering to the early adopter tech set, and trying out Twitter integration, as Jig was primarily Facebook focused. “I wish we were already on our 37th thing,” he says.