Whither health insurance? A former medical advisor to the Obama Administration who happens to be the brother of former Presidential Chief of Staff predicted in the New York Times that by 2020 health insurance companies will be extinct. Nearly two years ago, I penned a piece entitled Health Insurance’s Bunker Buster. It outlined two key reasons that health insurance — as we have known it the last couple decades — will cease to exist.

Yet, in the midst of this backdrop, you have a CEO of a major insurance company looking positively giddy about the future when he is presenting at an event such as Health 2.0. Mark Bertolini of Aetna looks to be doing his best imitation of Lou Gerstner, who engineered the wholesale reinvention of IBM.

“In 1990, IBM had its most profitable year ever. By 1993, the computer industry had changed so rapidly the company was on its way to losing $16 billion and IBM was on a watch list for extinction — victimized by its own lumbering size, an insular corporate culture, and the PC era IBM had itself helped invent.” — Who Says Elephants Can’t Dance? Inside IBM’s Historic Turnaround

It looked like Gerstner was brought in to oversee the fire sale of the piece parts of IBM. Instead, his turnaround drove a 10x increase in IBM’s stock price over 10 years and put IBM on a path to renewal during the transition from one generation of computing to another.

Aetna’s aggressive reinvention is great news for healthtech companies. Aetna is single-handedly creating a great exit opportunity for startups having completed over $1.5 billion of acquisitions in the last year. More importantly, those companies are helping healthcare organizations transition from the “do more, bill more” generation to the value/outcome-based generation.

Unfortunately for most health insurance companies, their behavior is reminiscent of DEC, Data General, Wang and a host of once-successful computer makers that are in the dustbin of history. While still very profitable, DEC et al. saw the handwriting on the wall yet didn’t take decisive action. Health plans are largely following in DEC, Data General and Wang’s footsteps. Sure, they are making a few tactical moves here and there, but far from the rethink that is necessary. In contrast, Bertolini has stated that increasingly Aetna views itself as a healthIT company with an insurance component. Not exactly what you expect to hear from one of the largest health insurance corporations.

Observing Aetna from afar, it appears there are at least four key insights driving their behavior:

There are readers who know more about Aetna and health plans in general. Please debunk or add to my hypotheses on Aetna’s strategy.

The Prezi below is the introduction to a presentation I have given to some pharma execs that holds Aetna out as an example of how a healthcare organization can shift their core focus. In Pharma, it’s important to ask What Can Pharma Learn from the Railroads and IBM, — namely that they need to reinvent themselves or their business will remain a slow growth or flat business. For health insurance, it is more akin to the minicomputer makers where they must reinvent or they’ll go the way of DEC, Wang and Data General. 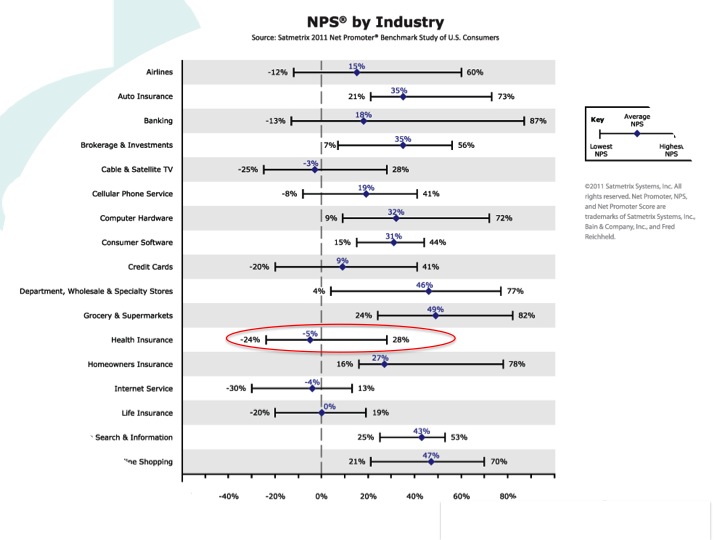 The “good news” in the horribly bad numbers is that there is every reason for health insurance companies to follow Aetna’s path and reinvent themselves. It doesn’t serve health plans to be among the most hated companies in American according to the American Customer Satisfaction Index. The blurbs on each are enough to make any health insurance exec wince.

The Rube Goldbergian insurance reimbursement system makes it virtually impossible to avoid comments like the last one. All of the change agents I speak with in health insurance companies realize the criticality of a major rethink and are excited about the work ahead to reinvent themselves. They also realize that it is very difficult for an established organization to change from within. Technology hubs such as Silicon Valley and Seattle have become the de facto R&D centers for healthcare organizations seeking to reinvent themselves. Startups stand to benefit from this friendlier environment. The entire lifetime of the iTriage product Aetna bought was shorter than historical decision processes within health plans and providers.

This should be a cautionary tale not only for health insurance companies, but providers and pharma as traditional industry demarcations are disappearing. It’s time to get the lead out and realize that patients are more than a vessel to attach billing codes to.