If you have one of the few Android devices currently running Ice Cream Sandwich, then you’re going to love this post. The rest of you, including those of you on iOS, will have to gaze longingly for a while.

Because Chrome just landed on Android.

It’s faster. It syncs everything (provided you want it to). It has nifty transition effects and a more intuitive system for jumping between tabs. And it’s also loaded with potential.

Google’s Chrome browser, which has skyrocketed to popularity since its debut in 2008 and consistently gets top marks for being the fastest browser in town, has long been strangely absent from Android. To be clear, Android has always shipped with a browser of its own — and it actually shares much of the same codebase with Chrome, including the V8 JavaScript engine. But next to the real Chrome, it’s a clear wannabe. After using it for a day, I really have no intention of using the older browser again.

Unfortunately, as I alluded to earlier, Chrome is only available for Android 4.0 and higher — which means the vast majority of Android users won’t be able to take advantage of it yet (devices that support 4.0 at this point include the Galaxy Nexus, Transformer Prime, Xoom, and the Nexus S). Google says this was done in part because Chrome needs to take advantage of the hardware acceleration features that were introduced in the latest build of the OS. If you have a device that supports it, you can download it right here.

So what makes Chrome great? Let’s take a look at the features.

The most obvious difference between Chrome and the stock Android browser is the UI.

For one, Chrome comes with the browser’s gray color scheme, rather than the ICS ‘Holo’ styling. Browsing through the app you’ll notice plenty of subtle effects that contribute to the browser generally feeling more polished. Tabs slide in when they open, and fade out when they’re closed, which helps you stay oriented in the app. The ‘all tabs’ button, which includes a number to indicate how many tabs you currently have open, pulls up a ‘stack’ of your open tabs that you can slide around to get a better look at the tab’s content before you actually open it.

Another nice touch: if Chrome notices you’re trying to tap an area that has a dense cluster of links (in other words, you might have trouble tapping the right one), it’ll launch a neat magnifying pane so that can you tap the one you want.

But the changes run far deeper than the UI. My favorite is the support for sync. 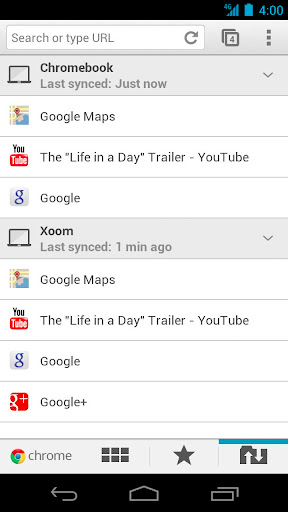 For some time now, the desktop versions of Chrome have allowed you to connect a Google account to your browser, allowing you to sync browser history, bookmarks, apps, autofill, and other data between multiple computers (in other words, if you have a laptop and a desktop machine, you can ensure they’re configured the same way). Now you can hook your Chrome mobile app to your Google account too, and it’ll sync much of the same data (it doesn’t autofill or apps yet, though).

The syncing feature comes with a neat trick: open up Chrome on your phone, and you can see a list of all of the tabs you currently have open on your computer’s copy of Chrome, which is awesome if you’re frequently having to email yourself directions or links to various product reviews. Better yet, this works even if you’ve shut the lid on your laptop and it’s in ‘sleep mode’ — though if you exit out of the browser entirely, the list will go blank.

(As an aside, if you’re looking for these features and are on an older Android device, check out Firefox for Android, which can do many of the same things).

And then there are the speed boosts. Chrome definitely feels snappier, no doubt in large part to its hardware acceleration. It also comes with several speed-related features like pre-fetching — Chrome will automatically begin loading the page it thinks you’re visiting next (it only does this on Wifi by default, though you can change it to work over your mobile connection as well). It also includes some key features that the stock browser doesn’t, like Web Workers and WebDB. One thing it doesn’t have: Flash, because Adobe stopped development on mobile Flash. Can’t say I miss it.

But while Chrome is definitely a major upgrade, its Beta tag is well deserved, because it’s actually missing some subtle features found on the stock Android browser. The most noticeable omission is the lack of a ‘Request Desktop Site’ feature, which made its debut in the browser that ships with Android 4.0. If you’ve ever browsed to a site from your phone, only to find that it detected your mobile browser and served up an inferior, “mobile-friendly” version of what you were looking for, then you’ll appreciate that tiny checkbox. It’s missing on Chrome for now, but it seems obvious that it’ll be added at some point.

As for the long-term outlook, Chrome is looking great. Extensions aren’t part of this launch, but they are inevitable. And while Android 4.0 will continue to ship with its stock browser for now — which means it will live side-by-side with Chrome — down the line Chrome will be replacing that stock browser (it’s a little unclear how exactly this will fit into the Android Open Source Project, but for starters much of the code from the mobile client will be upstreamed to the Chromium project).

Oh, and as for you iOS users? I asked Google’s VP of Chrome Sundar Pichai whether Google had considered building on top of iOS’s WebKit-based browser (they wouldn’t be able to introduce Chrome’s rendering engine, but they could potentially offer the syncing features). Pichai didn’t rule this possibility out, but it sounds like an iOS version won’t be coming any time soon — for now, the team is watching how the Android version is received.