Chill, a startup that started out Namesake and then morphed into a virtual environment for video watching, has performed the mother of all pivots (again) today, going from a Turntable for video to a Pinterest for video, allowing users to post as well as view, comment on and repost video from people that they follow on a pretty grid interface. The new Chill now supports any video, from YouTube, to Vimeo to College Humor to “pretty much everything under the sun: ESPN, Crackle, Funny or Die, you name it!,” says co-founder Brian Norgard.

Norgard tells me that the design change came after listening to user feedback about the original site and after the team realized it was really difficult to build a purely synchronous product, “We learned a lot about what customer actually wanted from building the first product and I’ve always believed the best sites and apps come from those companies in market (think Path, etc). It’s the nature of a dynamic marketplace. We would have never seen an opportunity of this magnitude had we not been listening and learning from our first batch of loyal customers.”

With the new Chill, users can opt into bringing in their videos from Facebook and Twitter or simply posting a link with the “Post video” bar at the top of their Chill grid. They can either choose to view videos of people they’ve followed on their homepage or view videos on the Chill popular page. Norgard tells me that a Pinterest-like repost bookmarklet is in the works for people who’d like to curate the videos they encounter while surfing the Internet.

But Pinterest already has a video section you say? Well Chill is a) open to the public and b) optimized for video, so when users click on a video they can view it full browser. When asked what set the new Chill apart from Pinterest Norgard told me, “Everything. We support nearly every type of video known to mankind. The entire experience is optimized around video sharing. Video is a whole another beast. It *needs* a dedicated discovery platform. It’s too important to humanity. Video can’t play second fiddle in this world nor should it….”

The new Chill also incorporates Path-style emoticons and a Facebook Timeline-like cover which users can change by clicking the “Change art” button at the top of the grid. Hmm … It’s almost as if Norgard has taken every successful User Interface advancement of the past couple of months and incorporated them all into an entirely new product.

Thus far the changes seem to be working. Norgard holds that the service is seeing over 10 sign ups a minute since it switched on the redesign at 10am PST this morning, which means around 5,000 people have signed up so far (with very little press coverage Norgard points out enthusiastically).

“Things that are important in our lives are being increasingly networked, from music to images,” Norgard explains, “But why hasn’t this been nailed for video? It’s the most expressive and rich medium in existence. We’ve seen a lot of interest in video as a category, but for some reason the social tools are still pretty weak.”

He views the new Chill as a completely post-Television product, “There’s an entire generation that cares much more deeply about video on the Internet than what’s on TV or in the theaters. They live and breathe content being shared in their network. Whether it’s a music video, a funny video on YouTube or something shot with an iPhone what matters is the content and the context. Expression is driven through media sharing and this is just the start, especially in video.”

Chill has over $1.5 million in funding from Kleiner Perkins,Redpoint, Atlas Venture, Paul Kedrosky, Science and Crunchfund. 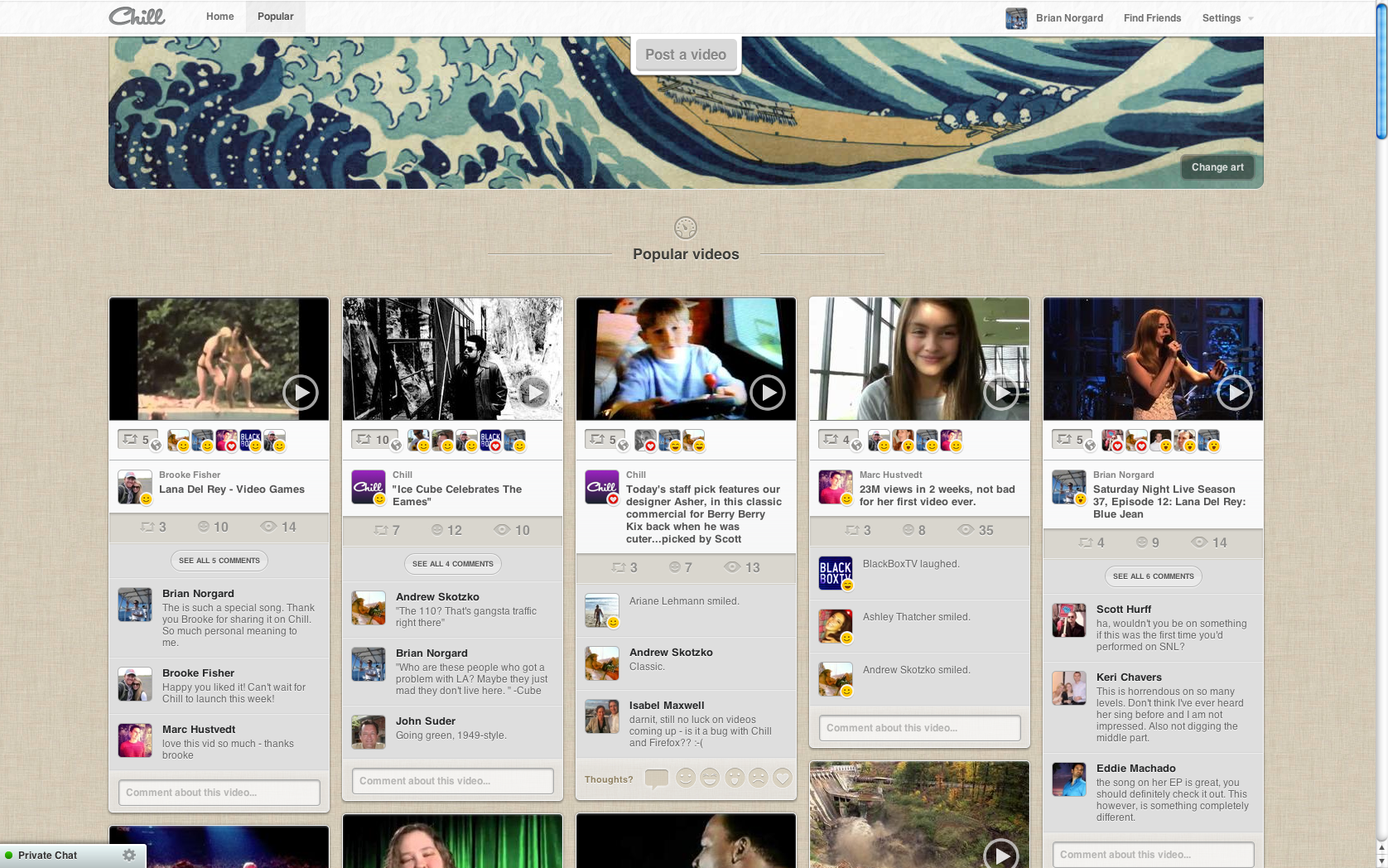 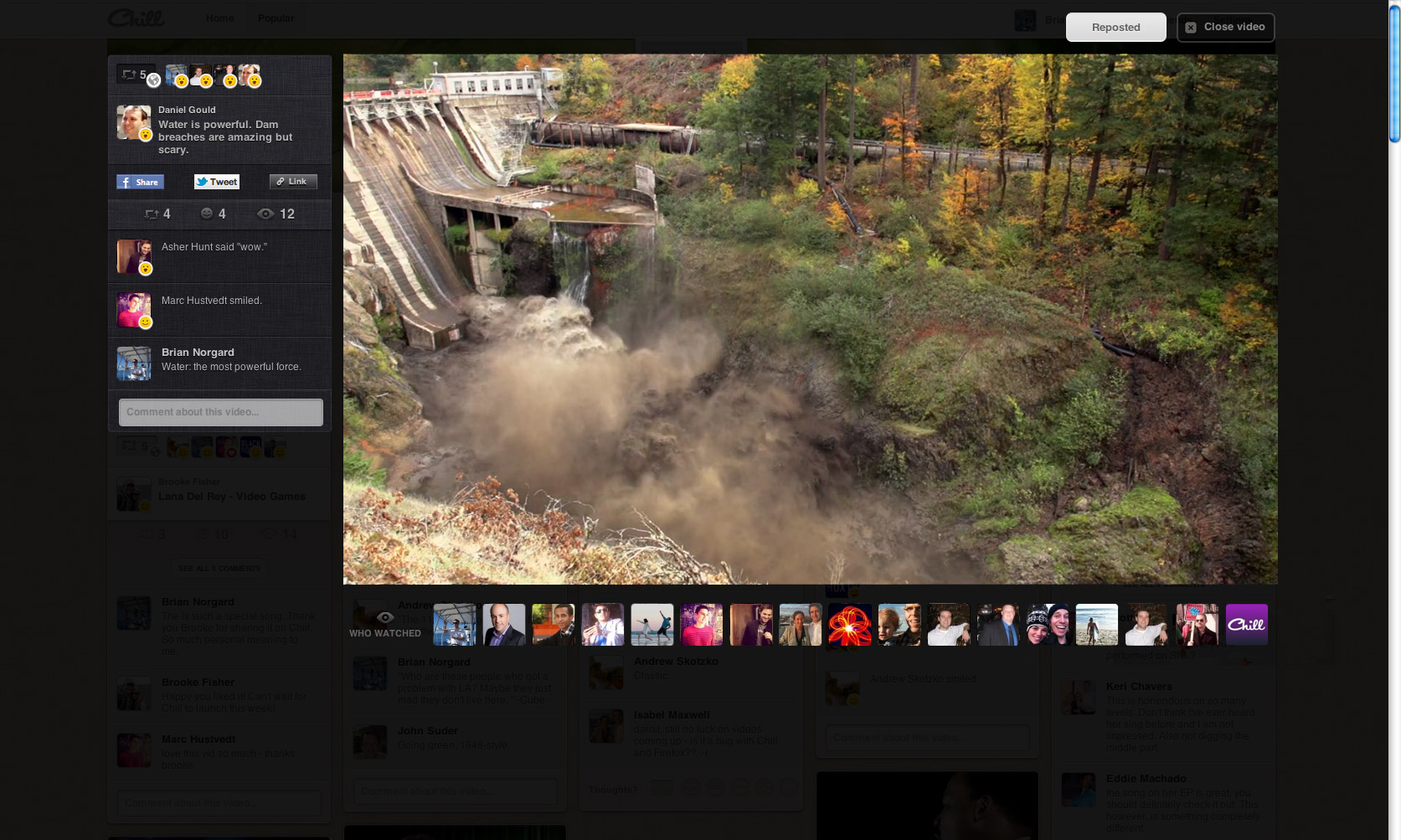