As Semil showed back in November, social travel sites are all the rage these days among the entrepreneurs, offering plenty of interesting approaches to offering recommendations on where and how to travel. You may not have heard of HipGeo, but if you’re a traveler, this is something that will likely pique your curiosity. HipGeo has developed a location-aware platform that records and displays the places users go and how they get there, and today they’ve released a new app that is essentially a travel diary for the modern Web.

The app offers a unique and snazzy interface that is designed to let mobile users post text, places, and photos that are recorded, organized, and displayed around a user’s travels — the places they’ve visited, all in pursuit of the “places graph”. To get a better, more granular picture of HipGeo, you might see it as a product of some of the best features of services with which we’re already familiar.

HipGeo is trying to do with GPS and location what Facebook is doing with time on the much-talked about Timeline, more specifically with the new “map” feature Facebook has incorporated into Timeline based on the aggregation of “Places” check-in data. HipGeo is, in a sense, the smaller, third-party app version of that, which is now usable by other developers thanks to the launch of its API in November.

Or you might see HipGeo as Banjo that goes beyond the Foursquare API, or doing for location what Path does for time (and location), but only for the people you really want to connect with. Imagine seeing all the photos and comments at an arena or stadium, as well as the users who uploaded them from last night’s concert or game — that’s what they want to make possible. And do so by using place history and tracking to do a lot of the content discovery heavy lifting, or really fellow traveler discovery, in an attempt to create the kind of “serendipity” Catherine Cook talks about in this recent TC post. 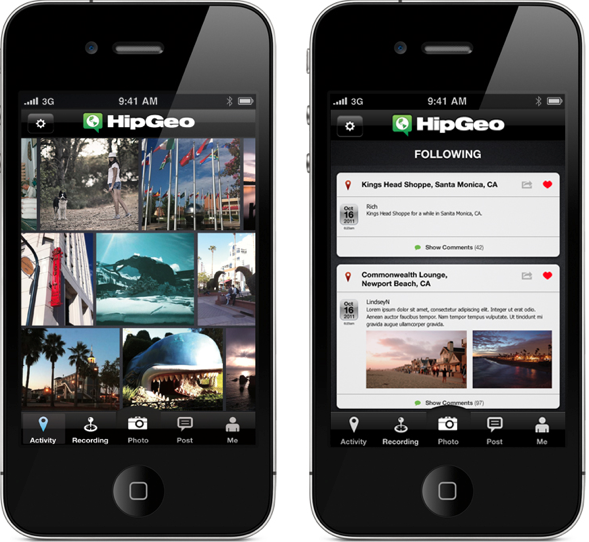 HipGeo initially launched as a way for users to create animated slide shows of their activities, but HipGeo Chief Product Guy Rich Rygg says that users requested more of a blog-like display to share their travels and trip journals, so the team responded with this new app in an attempt to create a lovechild between Tumblr and Foursquare.

HipGeo was founded by GeoCities alumni, who are well-familiar with location and content sharing, and they’ve built a platform that is centered around delivering location and travel information. With this tech at its core, HipGeo can make easy modifications in terms of features and the “top layer”, responding quickly to user and developer requests, just as they did in adding the app’s new blog features.

But for the user, all he or she has to do is travel and record those experiences on their phones. HipGeo then builds a timeline around photos and location, dropping them as points on a map. From there, you can decide who to share your travel information with, if anyone, or just flip on passive tracking to let the app record the goings-on (photos, comments, and locations) of your day in a realtime diary.

It’s a way to solve check-in fatigue, as the startup offers a crowdsourced blog for location, allowing you to see what route others are taking to get to their destinations, where they’re going, and what they’re saying about it when they get there. This becomes a source of realtime recommendations and you don’t have to check in one million times from every location, because geotagging is inherent to all of the content you’re producing. You just have to make sure you’re keeping your phone active as you travel, which shouldn’t be a problem for most smartphone users out there, judging by the level of activity in our Foursquare and Instagram feeds.

For more, check out HipGeo at home here, or on the App Store here. (Android is on the way.) Let us know what you think.