For a young startup, sometimes you want any funding you can get. For an incubator program, sometimes any startup is what you’re looking for. Finding each other won’t necessarily make either one successful, but more pairings might help overall. Or so believes TechStars, which is launching what it intends to be the Common Application of the startup world.

Called Accelerato.rs, the application is a standard online form that asks founders basic investor-type questions, and lets them write one version then send it to any of the dozen or so participating programs. Funded by the entrepreneurship-focused Kauffman Foundation and under development since earlier this year, Accelerato.rs also lets startups track their acceptance status for each of the programs that they apply to.

The foundation will also be studying how participating startups do to better understand what makes accelerators successful. Towards that effort, TechStars is also providing a simple tool for aggregating and presenting data about accelerator track records. The way it works is that each accelerator first has its companies create CrunchBase company profiles for themselves (which they should be doing anyway), then the accelerator provides TechStars with a file containing basic information about each company and links to the profiles. TechStars then creates a data table for them that they can publish to their sites (directions here). The immediate goal of this data is to help programs better show off the value they have created to prospective companies, which is part of the larger goal of making the whole process as simple as possible for entrepreneurs.

TechStars already has its own stats available on its home site, and they show that 80% of its 92 post-acceleration companies are active because they’re profitable or venture-backed, while eight have been acquired and another eight have failed. Note: A recent TechCrunch guest post compared TechStars and Y Combinator results using CrunchBase data, but slightly undercounted TechStars because not all TechStars companies had marked the program as an investor in their profiles — make sure to fill out those out completely, everybody. 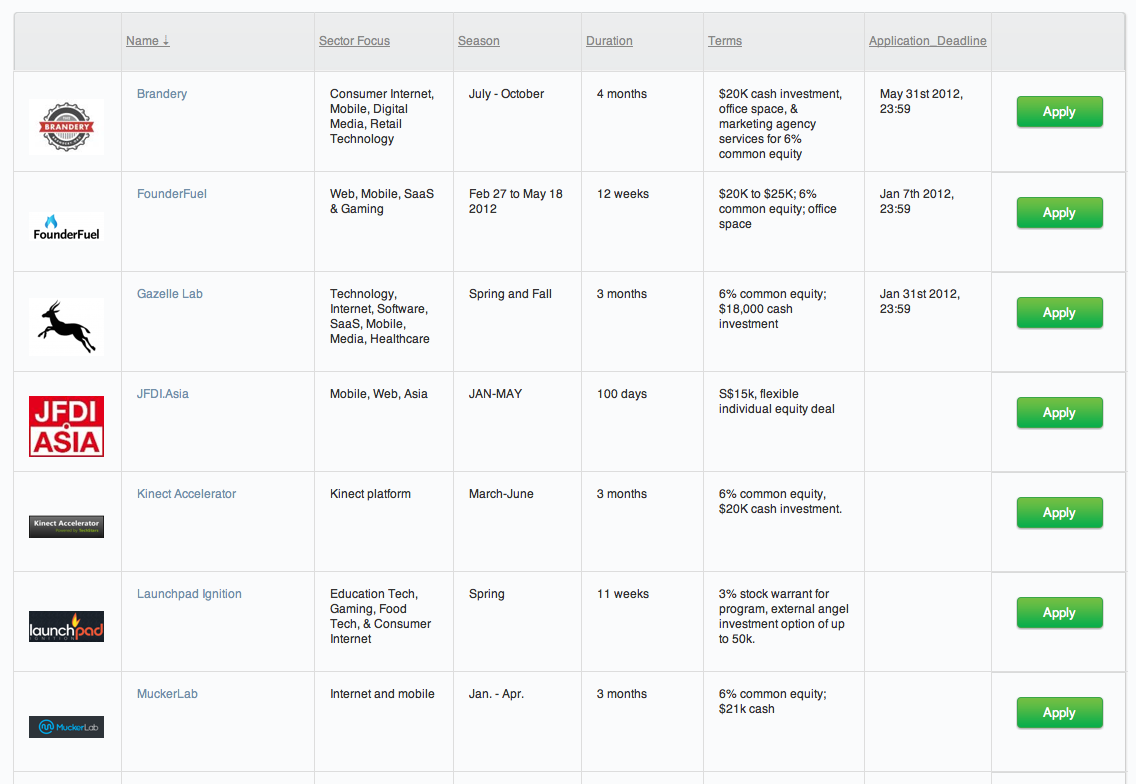 Unlike the Common Application for US universities, which is a fully neutral membership organization, there’s also a bit of a branding play for TechStars going on here. The Accelorato.rs site is set up to have a neutral image, but TechStars handles the operations, and the participating companies come from its TechStars Network, other programs that TechStars has reviewed to confirm they’re funding and mentoring startups. The site isn’t necessarily restricted to that group. “Any seed accelerator can use it,” Cohen responded when I told him that the program felt weighted towards his organization: the application can be fully embedded on other accelerators’ sites, and TechStars guarantees that it doesn’t access data about other programs.

Seedcamp has its own form at present, and so does the original seed-stage fund, Y Combinator (whose set of questions are especially customized to its overall hacker theme). Think of them as the elite universities that make college applicants fill out their own special sets of questions, tailored to their own academic missions.

The Accelerato.rs questions are plain-vanilla, although participating companies can alter them as much as they feel like. Some samples:

– “Describe your startup in 140 characters or less.”

– “Explain how the company will make money.”

– “What are some things that the team (or its members) have built in the past? Please include URLs.”

Of course, many people who want to start a company won’t need to go through any program to get the funding, mentorship and network they need. And many of the top startups who do want the accelerator experience will get into the top programs. This application might help bet more candidates in the door, but accelerators are going to have to still figure out their value add to recruit the types of founders who will make them money.

But still, what’s the worst case scenario if accelerato.rs helps more startups get more investment? That some rich people lose a little money they knew they were risking anyway, to help other people with ideas get some real-world experience? In my view, just trying something is a huge, under-appreciated benefit would-be founders will get out of any accelerator. My Y Combinator startup didn’t work out, but Paul Graham introduced me to Matt Marshall at VentureBeat, and that ended up turning into a writing job and eventually another startup that did work out (meanwhile one of my cofounders, Phil Kast, ended up working at a successful YC company, Auctomatic). Having to go through the application process and really flesh out our plans, then go through the intense process of building and launching to the public in the program, were more valuable for me than much of what I learned in college.