Exclusive – Fab.com, the ridiculously fast growing e-commerce startup, is launching a new social shopping feature today that lets members view and interact with any activity on the design flash sales site in real-time.

Dubbed the ‘live feed’ and reminiscent of Facebook’s early iterations of what is now the News Feed, it captures what users are purchasing, sharing, commenting on etc.

The live feed adds a powerful social component to the e-commerce activity happening on Fab.com.

Importantly, while all activity on the site is shared with anyone visiting the live feed, users have the possibility to conceal their usernames when they buy or favorite something on the site. All people need to do to appear anonymously as “a Fab user” is flick a virtual switch on the top right.

Fab.com founder and CEO Jason Goldberg tells me social activity is mighty important to the company; more than 50 percent of its now 1.4 million strong registered user base were introduced to the site by people sharing items for sale at Fab on social networks.

You’ll notice that the feed refreshes constantly. No wonder, if you consider that Fab.com has attracted close to 1.5 million members and sold over 600,000 items in just six months.

Goldberg tells me that the partners of Andreessen Horowitz, the VC firm that recently led a $40 million funding round for the company, have never seen an e-commerce site grow this fast.

The company employed 3 people in New York City back in February 2011, and now 90 (and 130 in total worldwide). The company just nabbed a former Etsy VP as COO, too.

Finally, make sure you DO NOT MISS Goldberg’s blog post about the recent fundraising bonanza. 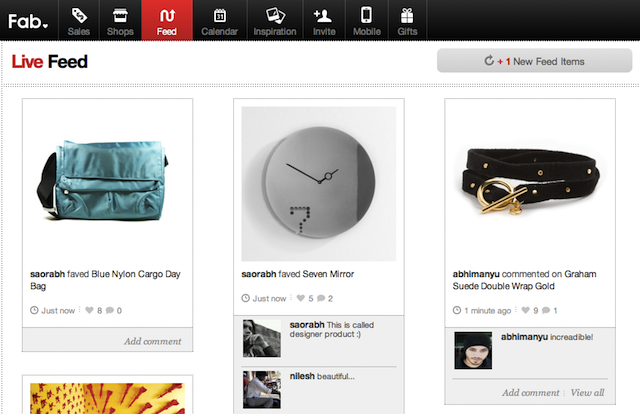