According to Web analytics company StatCounter, Google Chrome has surpassed Mozilla Firefox to become the second most used Web browser in the world after Internet Explorer.

I’m always a bit wary about StatCounter’s claims, but I would be very surprised if Chrome didn’t overtake Firefox at some point.

In the UK, Chrome bumped Firefox to the third place back in July 2011 (also according to StatCounter).

Microsoft’s Internet Explorer maintains a strong lead with 40.63 percent globally (and even 50.66 percent in the United States), but the graph below shows both IE and Firefox declining fast.

StatCounter says its statistics are based on aggregate data collected on a sample exceeding 15 billion page views per month (4 billion from the US) from a network of 3 million+ websites.

Chrome Getting Native Gamepad, Webcam, And WebRTC Support In Early 2012 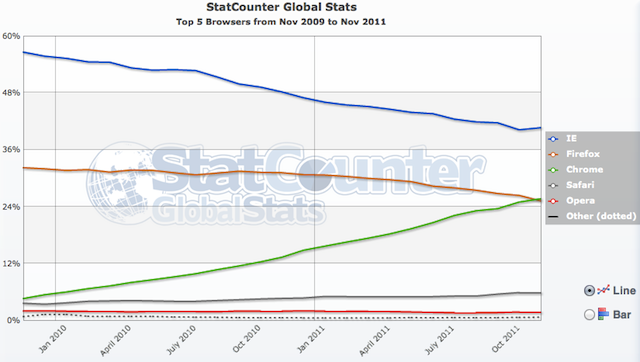