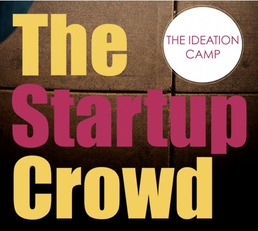 This post is for those of you who are just getting started.

Those of you who already have established businesses and are enjoying post-startup success should probably read the other stuff on TechCrunch or play Skyrim or go make a cup of tea instead.

Now it’s just us, you the smart guys with the great ideas they are trying to turn into a tangible startup success and me, the nerd who is lucky enough to spend her days writing about the great ideas of others.

It’s no secret that an idea alone doesn’t make a business. It’s a stony path from that first eureka moment to the time when a look at your bank account will finally not result in a slight feeling of panic anymore. For a lack of time, money, management or simply luck, many entrepreneurs with great ideas never make it to success.

I think that’s too bad. I love great ideas. That’s why I’m super-excited about what the team at The Startup Crowd is doing. This is a brand new movement trying to give a quick injection of business support to young startups in need of help. Entrepreneurs who find themselves stuck somewhere in the process of developing their idea are invited to come along to Startup Crowd camps, where 6 hours of coaching will hopefully help them iron out their issues and leave them all fired up with a new can-do attitude.

I came along to the Crowd’s first Ideation Camp this Saturday, November 12th. The only non-entrepreneur in the 50 people strong group of attendants, I was probably a bit difficult to coach – mainly because I don’t have any problems to solve – but even I came out with a bunch of new ideas in mind.

The three mentors Miriam Staley, Jonathan MacDonald and James Layfield do a terrific job in making the room buzz with enthusiasm and challenge their campers to keep an open mind in finding the cure for their startup pains.

You can trust ‘this fluid world’ co-founder Jonathan MacDonald to bring his years of experience in senior management to the campers. Effortlessly drawing connections between the smallest startups and the biggest corporations, he manages to make the absolutely essential, road-to-success business values relatable to his very diverse bunch of listeners. I’ve never heard Aristotle’s Art of Rhetoric related to running a business, but in Jonathan’s hands it turned into a guide to startup marketing.

Miriam, James and Jonathan have clearly put plenty of enthusiasm into this project. Their ability to quickly catch on to the attendants’ business problems helped to make Ideation Camp a pretty successful pilot project. It’s the rather unconventional, refreshing way of coaching that encourages attendants to gather new ideas and turn them into inspiration for their own projects.

Don’t expect to hear expert presentations about successful business ventures. You won’t sit down and be coached through your particular problem step by step. This is a different approach. It’s more of, as one attendant said to me, “a real kick in the ass to go out and finally make this happen”.

It’s fun, it’s inspiring and it’ll make you face your challenges and give you some material to deal with them. If you have a great idea, you’re working on it, but something’s holding you back and you don’t quite know what to do, or if you simply feel discouraged, then give the next Ideation Camp a shot. There were some people with great ideas around on Saturday and darnit I hate to see ideas go to waste.