Google today launched the first iteration of its brand Pages product for Google+. The company has some big choices to make about how it will flesh out this skeleton to challenge the Pages product Facebook has had years to work on. Still, comparing the two visions of brand presences now can give us a sense of what might be next on the product roadmap for Google+ Pages, and the opportunities Google has to exploit weaknesses stemming from Facebook’s need to promote its application platform and draw advertising dollars.

Two core ways Google+ could make its Pages better than Facebook’s would be letting brands target updates to demographic subsets of their followers, and providing official app templates that let brands easily assemble their own custom apps rather than going through third-party developers.

Over the next few days Google plans to give all users the ability to create Pages. The rollout is a bit of a mess now, though, as every existing Page features a “Create a Google+ Page” link that abruptly roadblocks some users with a notice that they can’t actually do that yet.

Similar to Facebook, Google currently offers a few overarching types of Pages that break down into many sub-categories, according to Search Engine Land. Both include a special format for local businesses that allows them to list information like an address and phone number. Facebook provides very little instruction about how to choose the right category and how that choice will impact functionality. A better in-line Page creation tutorial could keep brands on Google+ from worrying they’ve screwed up their crucial first steps.

Google+ Pages lack custom vanity URLs, though you can assume that’s coming. Multiple admin support is reportedly on its way. The option to assign different roles and privileges for admins such as the ability to publish updates or remove other admins could make Google+ Pages more secure and easier for teams to manage.

As Jason Kincaid points out in his article on the launch of Pages (linked above), Google confusingly lets users both add a Page to their circles, or +1 it. The former means a user will start seeing the Page’s updates in its main stream and the stream of any circle they add the Page to, while the latter lets users share a link to the Page. Google will need to make following a Page an obvious and straightforward experience if it wants Pages to gain enough followers for brands to invest resource in publishing through them.

A great feature of Google+ Pages is Direct Connect, which lets users add a Page to their circles by searching +[brand name] on Google. This takes significantly less work than having to visit a Facebook Page in order to Like it. Direct Connect also builds on Google’s dominance in search — something it should exploit in other areas such as email and maps to differentiate its social network.

Another big potential advantage of Google+ Pages is that they can create their own circles which can then be selected as the audience of a post. Currently Google creates “VIPs”, “Customers”, and “Team members” circles that admins can populate. If Google provides an efficient and accurate way to sort followers into circles by age, location, and other characteristics, Pages could publish different updates to different demographic subsets of their audience to maximize the relevancy of those updates.

For example, if retailer Macy’s could publish updates to a circle of all their followers under the age of 30, it could serve its younger audience updates about more youthful products without annoying its older followers. Similarly, rather than creating separate Google+ Pages for their presences in different cities, brands could publish city-targeted updates about local promotions, and local businesses could publish zip-code targeted updates to those in their neighborhood. Facebook currently only allows Pages to target posts by country, city, and language, preventing age or more granular zip code location targeting.

Google+ users can comment on the posts of Pages but can’t post directly to the wall of a Page. They can mention a Page in one of their own updates by typing a ‘+’ directly before its name, but this won’t appear on the Page the way Facebook mentions do. The ability to post questions and feedback to their walls and have discussions with admins and other fans is leading Facebook Pages to become a new customer service channel that brands can’t afford to ignore. Google+ should think carefully about how much of a two-way communication medium it wants Pages to be.

As of right now, there appears to be no sign of analytics for Google+ Page admins. Being able measure engagement with posts and Page growth is critical to brands justifying allocation of resources to Google+, so it will need its own version of Facebook Page Insights at some point. This decision to keep Page performance opaque for now could be to keep brands from writing off the new social network before Google thinks it has attained a sufficient number of users.

In addition to news feed posts, a key driver of engagement and new fans for Facebook Pages is the ability to host applications. Pages use these apps to create landing pages that encourage Likes, sign-up forms for email and mobile marketing, contests and sweepstakes, games, and ecommerce storefronts. However, to create these apps, Page admins have to find solutions from third-party developers, and in some cases have to license Page management platforms to offer the apps they want.

Google has a chance to make Page applications more accessible to all businesses by creating official templates that can be customized with the images, copy, and functionality desired by brands. Rather than forcing admins to choose between apps built by unknown third-parties, it could give them free templates they can trust to work. This would also allow Google+ to offer Page apps without first having to create a robust set of APIs to support them.

Facebook has forged a functional model for brand presences on social networks. Unfortunately, its focus on app developers and its desire to get brands advertising in order to target specific demographics has left Google some big opportunities to create a friendlier platform for brands. By adding app templates and granular Page update targeting it could convince brands that Google+ could be a powerful, free, and easy-to-adopt component of their digital marketing strategy. 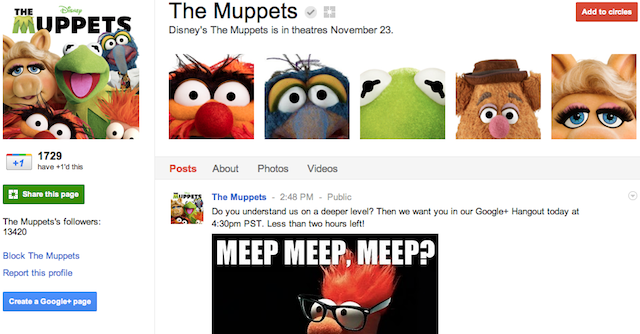