Over the weekend, I wrote a post pleading with Google to please, finally, bring VoIP capabilities to Google Voice — namely, with an app for Android. The app would have some major benefits: it would let you make and receive calls over your home and work Wifi networks whenever they’re available (that means fewer dropped calls at the office, even if you’re deep inside a large building). And whenever you aren’t around Wifi, you could fall back to your carrier minutes. Unfortunately, while Google was actually working on building a VoIP-powered app for Android long ago, it shelved it, likely because it was concerned about infuriating the carriers.

But shortly after that post ran, I started hearing some whispers. Turns out I’m not the only one with the idea — there’s another big (albeit less well known) fish that’s about to make a splash. Get ready for Republic Wireless, a new mobile phone service from Bandwidth.com that will be launching on November 8, and could truly be the phone carrier you’ve always wanted.

First, a little background. If you’ve placed a call on Twilio, Skype, Google Voice, or one of myriad other services that use VoIP, there’s a very good chance that Bandwidth.com was involved. The company’s extensive VoIP infrastructure handles much of the heavy lifting for these services, and it also offers some of its own products, like Phonebooth, a premium VoIP service for businesses.

Which brings us back to Republic Wireless, which is the latest of Bandwidth’s own products. The service will essentially be a mobile virtual network operator — in other words it’s an alternative to the likes of Verizon and AT&T. And unlike devices on those carriers, it will switch between VoIP over Wifi and a normal cellular connection, depending on where you are.

The product’s homepage was recently updated with a cheeky note promising a “new kind of wireless network” on November 8th. A link at the bottom confirms that it is, indeed, made by Bandwidth.com. The rest of the site is short on details, but we have many more thanks, in part, to a slide deck the company has been showing to its internal beta testers.

Here are the basics, some of which are gleaned from the slide deck, others which come from other sources:

Update: GigaOm reports that the service will be $19 a month, which will include unlimited voice, text, and data.

In short, it sounds totally awesome, provided there aren’t any pitfalls we haven’t heard yet.

I’ll keep poking around for more details. In the mean time, it’s worth checking out the Republic Wireless site — if you scroll to the right, you’ll find a long photo to likely contains hints as to what to expect come November 8. I’m wondering if the phone shown below (albeit in many pieces) is what the first device on the network will look like. 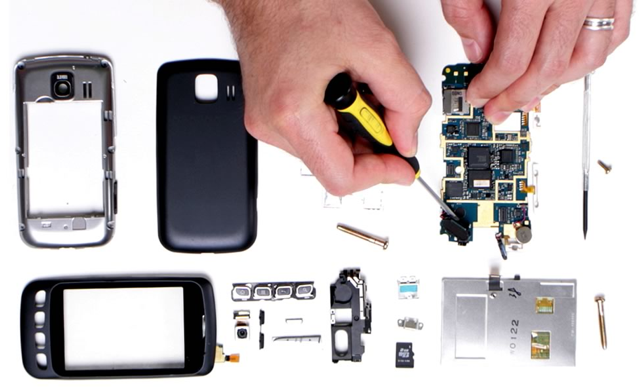 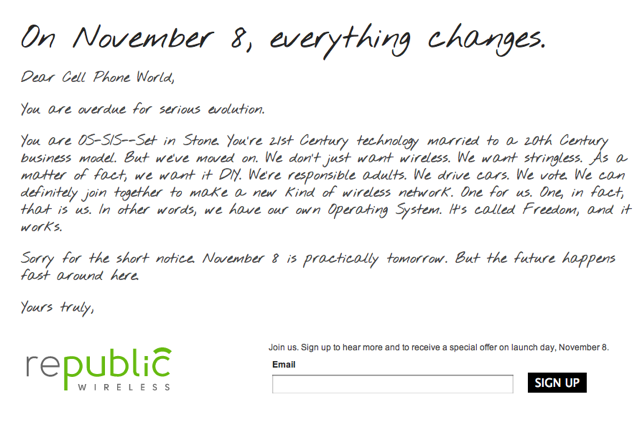