It’s nice and early in London, and Nokia CEO Stephen Elop has finally put to rest months of speculation by unveiling Nokia’s first batch of Windows Phones at the Nokia World conference. It’s been a long time coming — news of a Nokia/Microsoft partnership first broke back in February — but Nokia has at long last debuted the Lumia 800 and the Lumia 710. It’s been hinted at for months now, but the handset formerly known as the Searay has finally been revealed as the Lumia 800. Stephen Elop has called it the “first real Windows Phone” — quite a lofty claim, but does the hardware live up to it?

The 800 sports a curved 3.7-inch WVGA ClearBlack AMOLED display, a single-core 1.4GHz processor, and 512MB of RAM. Mobile photographers will find much to like about the 8-megapixel camera with a f/2.2 Carl Zeiss lens, and the 16GB of onboard storage should hold quite a few cat pictures. The specs won’t exactly set anyone’s world on fire, but the design might: like the N9 before it, the Lumia 800 features a stunning unibody design that’s shaped out of a slab of durable polycarbonate material.

The style-conscious among you will also be glad to know that the Lumia 800 comes in three colors: black, cyan, and magenta. Surprisingly, the Lumia 800 is already on its way to France, Germany, Italy, the Netherlands, Spain and the UK in time for a November launch. Customers in Hong Kong, India, Russia, Singapore and Taiwan will be able to nab one by the end of the year, but domestic Windows Phones fans will have to wait until early 2012. 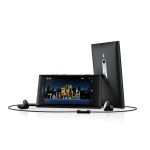 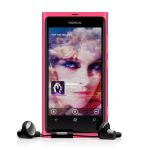 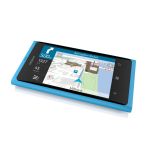 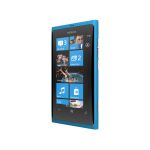 The 710 (formerly known as the Sabre) is the chunkier of the two, but that doesn’t mean it’s a slouch when it comes to hardware. It repackages the same 1.4GHz processor as seen in the Lumia 800, and pairs it with a 3.7-inch WVGA screen, and a 5-megapixel rear camera. It’s meant to be Nokia and Microsoft’s effort to capture a more budget-conscious audience, and it’s heartening to see Nokia give it the same performance potential as their more premium offering.

Though the 710 only sports 8GB of internal storage, it beats out its brother by including a microSD card slot that can accept up to 16GB of additional flash storage. It also bears the distinction of being one of the few Windows Phone with physical navigation keys, which is sure to please fans of tactile feedback.

Expect to see it hit shelves in both stealth black and crisp white, with multiple colored backplates to please the chromatically indecisive. It looks like the Lumia 710 will be headed first to Hong Kong, India, Russia, Singapore and Taiwan, alongside its more expensive brother. 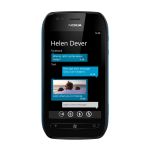 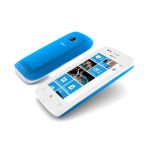 Oh, you thought Nokia was only bringing new hardware to the table? Perish the thought! Nokia has loaded both Lumia devices with a few new apps in an attempt to make their mark on Microsoft’s mobile OS.

If Nokia’s naming scheme is any indication, then the 710 and the 800 are just the tip of the iceberg. Interestingly, rumors of a high-end 900 series device made the rounds yesterday, but never materialzed on stage. Taking a no-holds-barred approach to their first Windows Phones would’ve gone a long way in helping Nokia cast off their stodgy reputation. Still, the Lumia series is a promising start for the Finnish phone giant, and we’re very much looking forward to seeing these devices in the proverbial flesh.