“‘If you live each day as if it was your last, someday you’ll most certainly be right.’ It made an impression on me, and since then, for the past 33 years, I have looked in the mirror every morning and asked myself: ‘If today were the last day of my life, would I want to do what I am about to do today?’ And whenever the answer has been ‘No’for too many days in a row, I know I need to change something.” — Steve Jobs

“To believe your own thought, to believe that what is true for you in your private heart is true for all men, that is genius.” — Ralph Waldo Emerson

The thing about Steve Jobs quotes is that conceptually he never really said anything that Henry David Thoreau (or Emerson or Nietzsche) hadn’t already said about being self-reliant, but he managed to package it up real nicely for modern mainstream consumption. His ingenious way of making something as complex as transcendentalist philosophy accessible to the masses mirrored the way he brought personal computing to the masses, by making it seem accessible to all.

The world would be a drastically different place if each of us woke up thinking, “Would I be filing an Excel spreadsheet today — or doing whatever sundry mundane task — if today were the last day of my life?” As I’ve said before, I would probably be on a beach somewhere instead of writing this or any post.

In his famous Stanford commencement address, Jobs explained that having the answer be “No” for too long was a signal to change course; The only problem is that most of us don’t know immediately whether that answer is “Yes” or “No.” The best we can come up with is a weak, “I don’t know.”

But even if we don’t quit our jobs or move away or start a startup or take a vacation immediately after reading his words, Steve Jobs challenged us to experiment with something that seems more interesting than our current monotony, experiment within the boundaries of our daily lives to see if there’s more there.

Because of that influence, many of us decided to pay our respects a day after his death, vicariously being a part of Steve Job’s life and contributing to his legacy — whether it was by changing our Twitter avatar to a rainbow Apple, or writing a personal eulogy on our blog, answering a Quora question, setting up Steve Jobs Day (!) or using humor to process the loss (my friend’s Macbook crashed, and she told the Genius at the Apple store that the computer probably got sick because its Dad had died).

Here is a collection of my favorite Steve Jobs-related homages, both online and off …

Barack Obama: “There may be no greater tribute to Steve’s success than the fact that much of the world learned of his passing on a device he invented.” 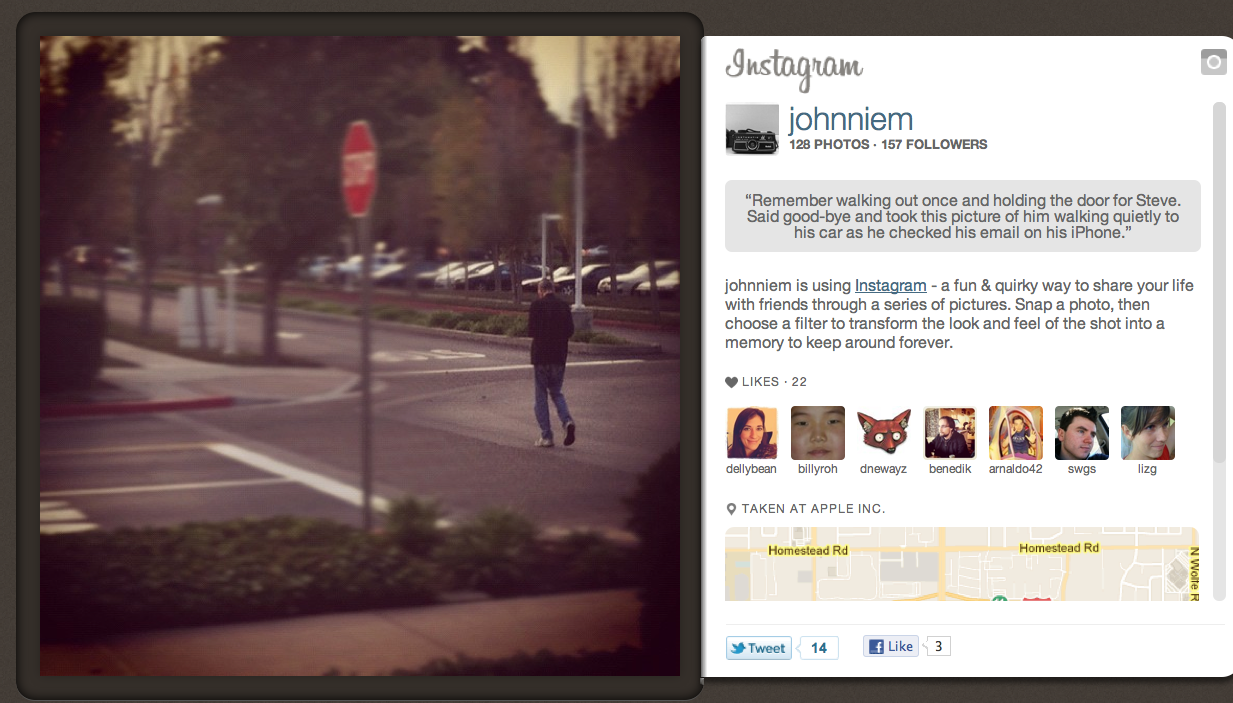 This Instagram by Apple designer John Manzari, of Jobs walking away from work.

This “Steve Jobs Was Always Kind To Me (Or, Regrets of An Asshole)” post by Gizmodo’s Brian Lam. 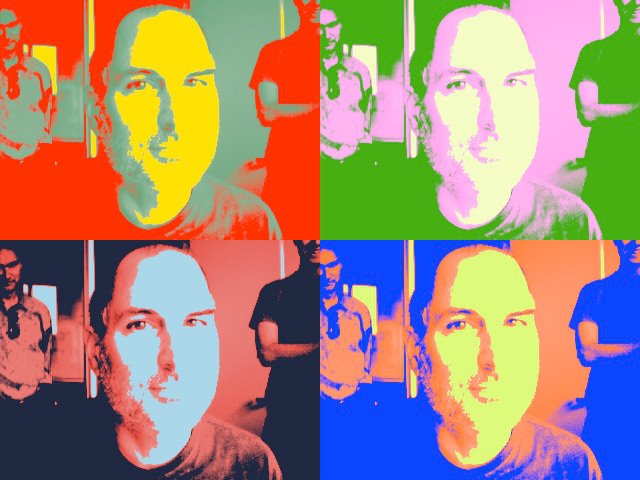 The Post It Note shrines at various Apple Stores (pic via Devon Biondi). 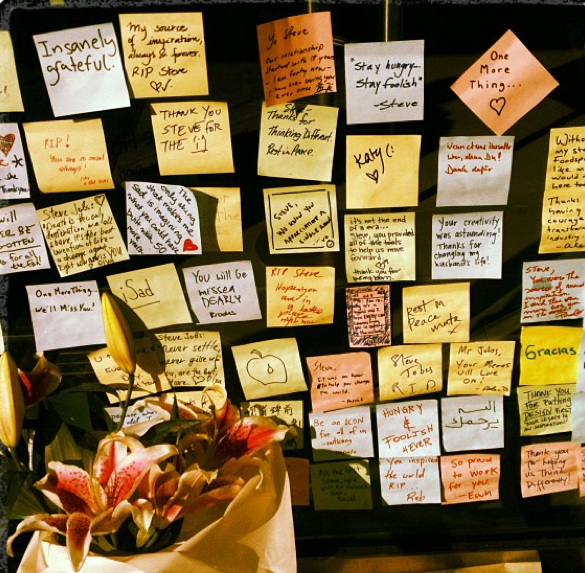 The Onion’s “Last American Who Knew What The Fuck He Was Doing Dies.” 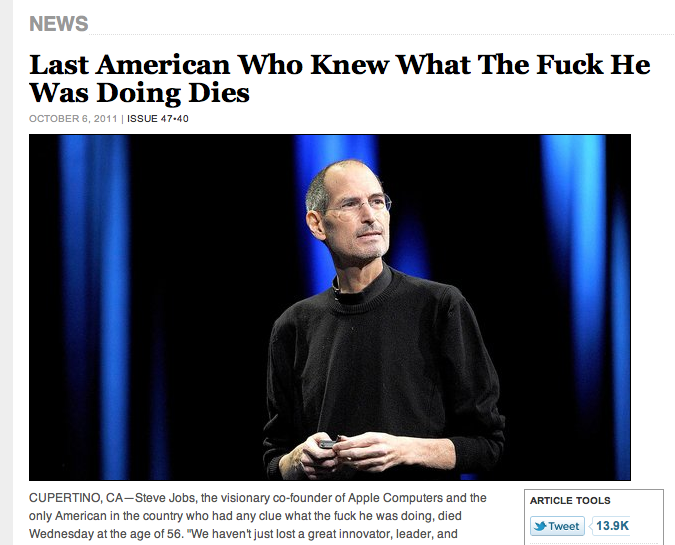 Cnet’s “How to get the Apple logo icon on iOS.”

xkcd’s Eternal Flame (which happens to be one of the few xkcd’s I’ve ever liked). 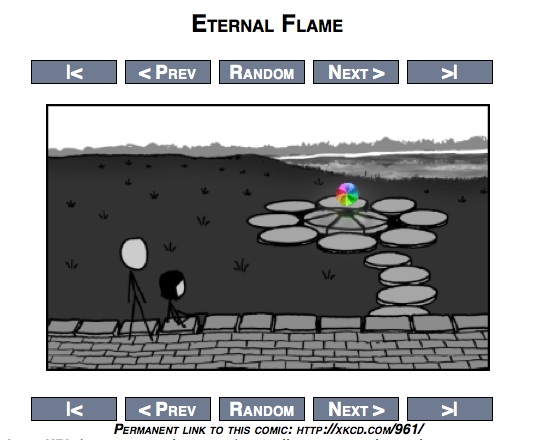 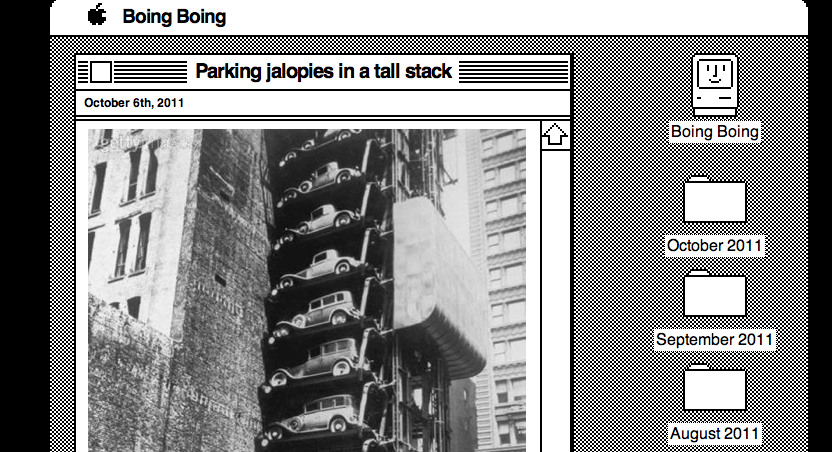 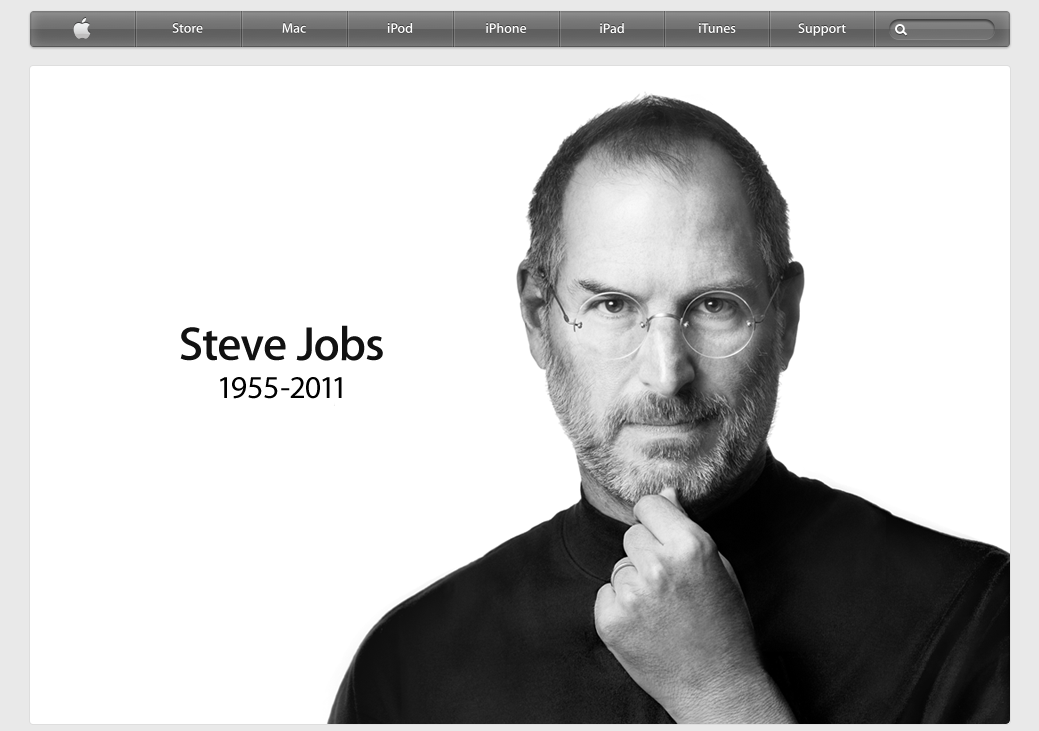 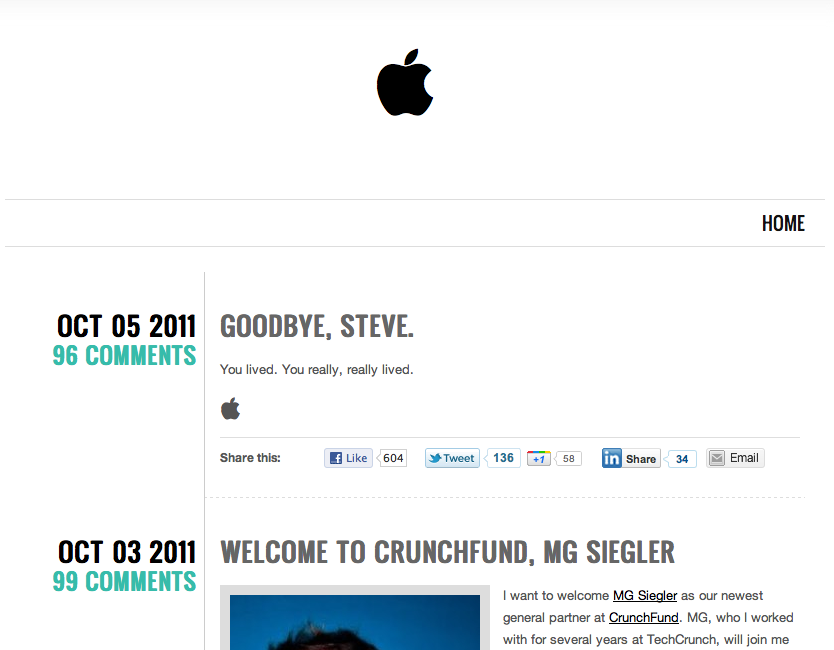 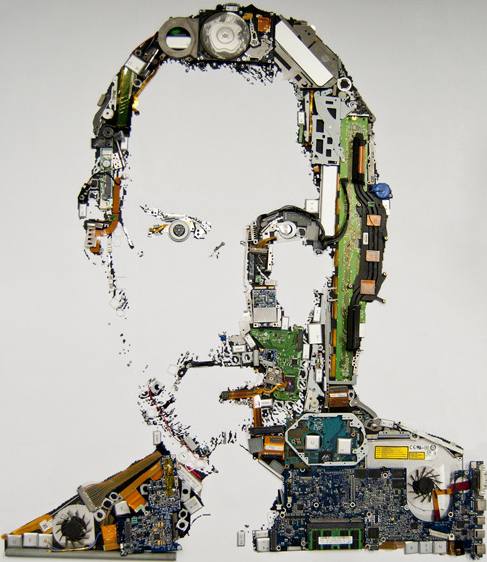 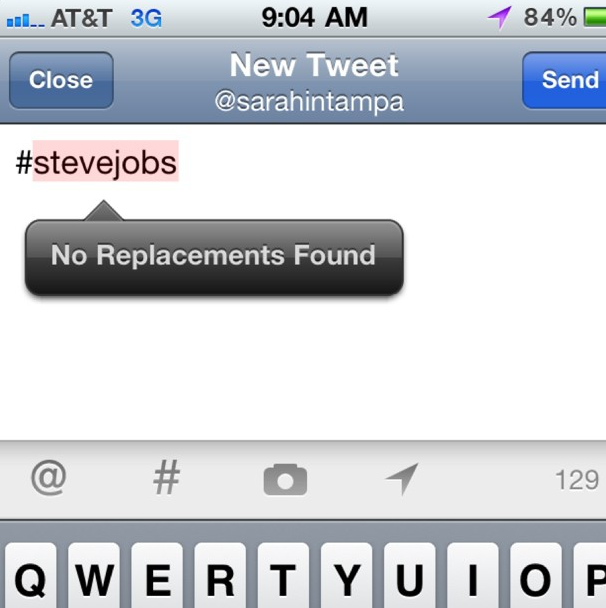 The Google homepage (the “Steve Jobs” links back to Apple’s homepage). 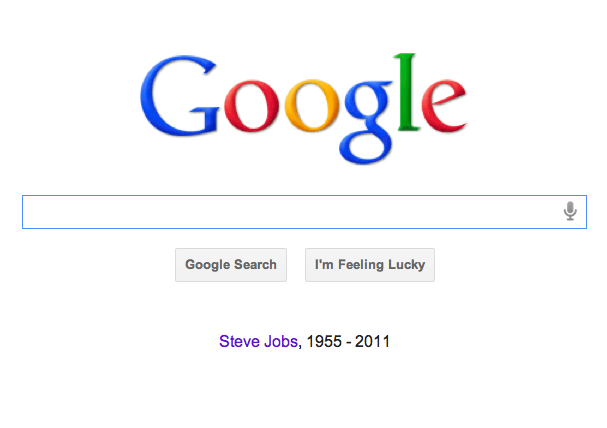 The Fix’s “Think Different” And LSD.”

The Woz remembers his partner and friend. 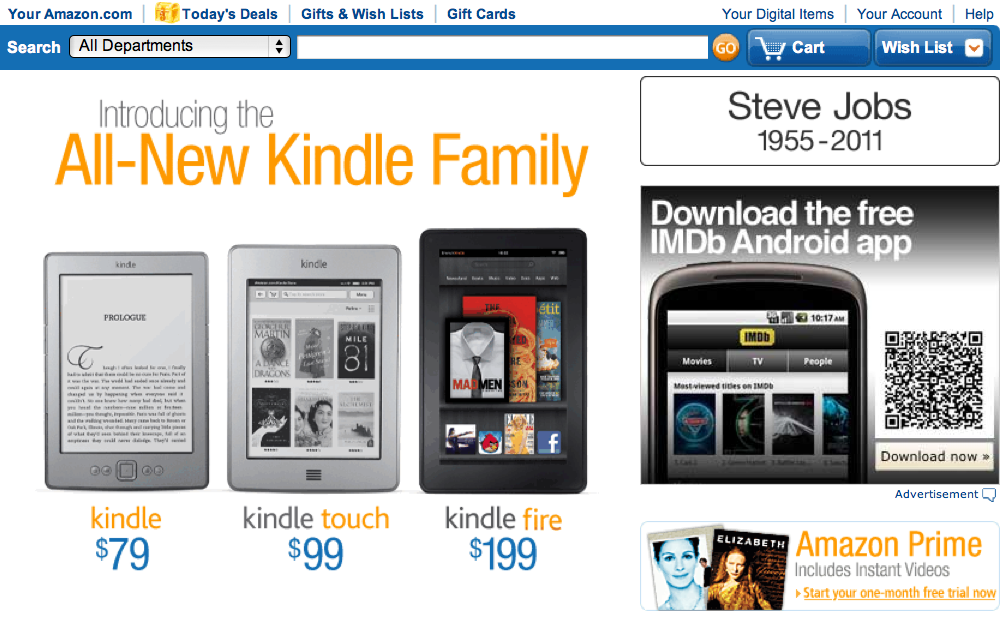 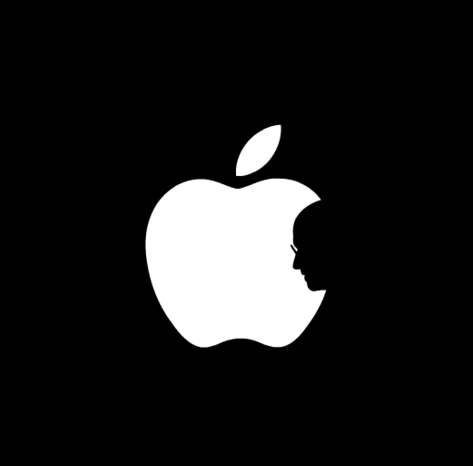 “10 years ago we had Steve Jobs, Bob Hope and Johnny Cash – Now we have no Jobs, no Hope and no Cash.” /via Reddit. 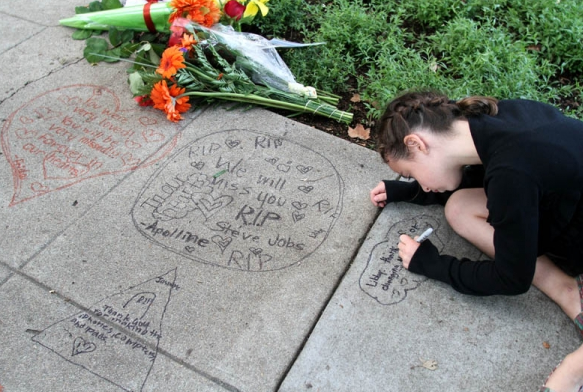 Steve and Bill /via Quora. 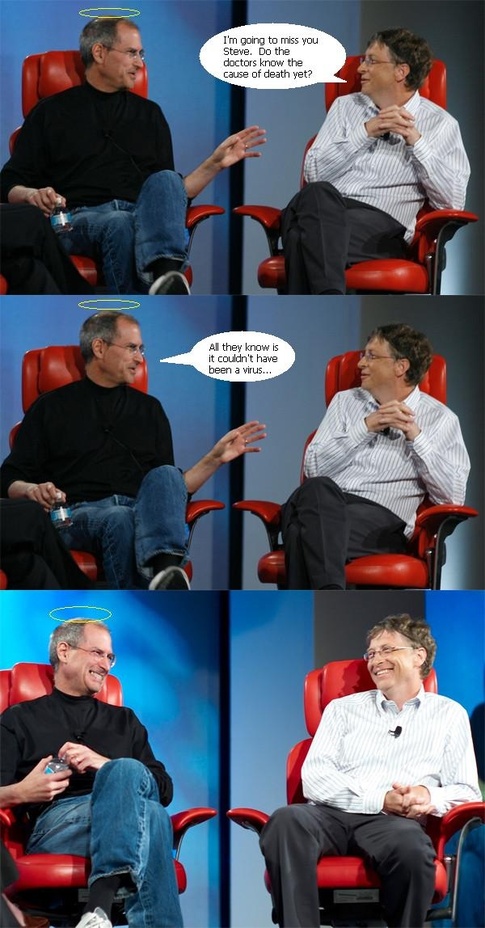 Portrait of Jobs made out of Mac Products /via Quora. 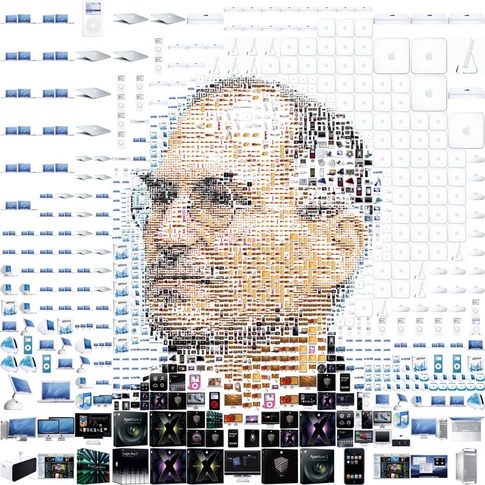 “Steve Jobs Was Not God.” 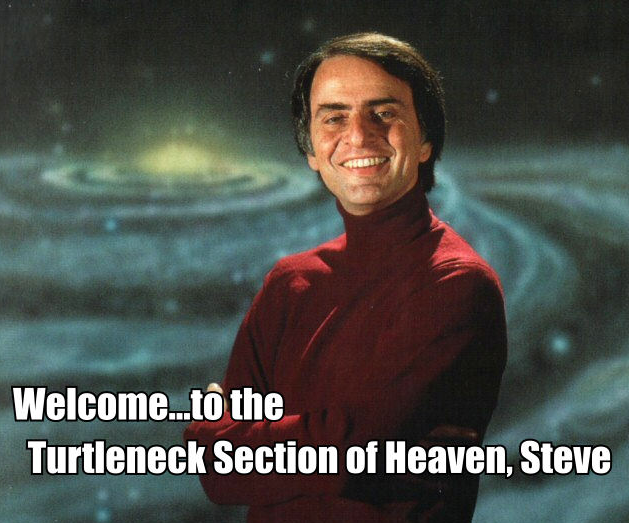 George Lucas: “The magic of Steve was that while others simply accepted the status quo, he saw the true potential in everything he touched and never compromised on that vision. He leaves behind an incredible family and a legacy that will continue to speak to people for years to come.”

“To Steven Jobs on His Thirtieth Birthday.”

Flag at Microsoft at half staff via Farhad Manjoo. 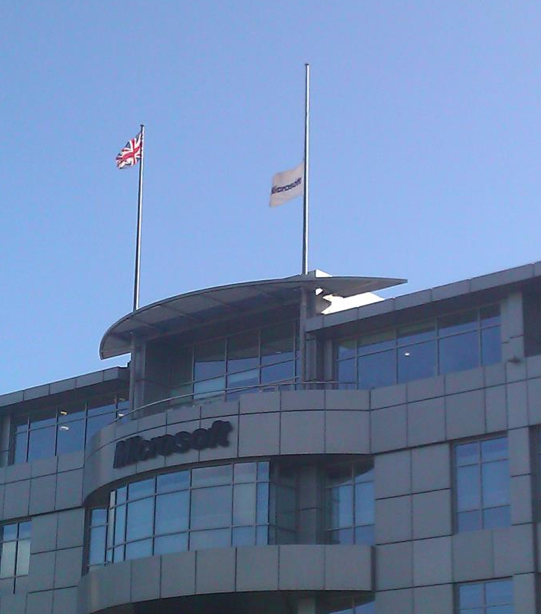