Back in 2007, a startup called 8coupons launched as a mobile coupon service that allowed users to sign up with their phone number, receive coupons and offers from local businesses via SMS. That was before Groupon had hit the streets, before the web daily deal model had really taken hold, and 8coupons was just a little ahead of its time on the mobile front. Since then, 8coupons has built out its web property, which today aggregates over 600,000 live offers nationwide from 4,000 sources including 450 daily deal companies as well as 50 local “non-daily” deal companies.

Over the last six months, 8coupons has been phasing out part of its mobile offers to focus more on providing its customers with the best online deals, as 8coupons Co-founder Landy Ung told us that, while merchants were initially excited by the mobile offering, the SMS option proved not to be scalable. The startup has instead recently launched an iPhone app, which users can use to see aggregated local deals and even take advantage of an augmented reality interface to see which businesses are offering deals as they stroll down the street.

With its new focus on becoming an all-in-one platform for deals, 8coupons is now leveraging its relationships with Groupon, LivingSocial and companies like restaurant.com to offer a full array of geo-tagged deals from your local area. Of course, as a web-based daily deal aggregator, 8coupons competes with startups like Yipit and The DealMap, which was recently scooped up by Google. The space, as we all know, is brimming with new daily deal players and aggregators, and as Jason wrote last year, in comparison to sites like Yipit, which offer a clean user interface, 8coupons had some design-related work to do.

To address this ease-of-use issue, 8coupons recently launched a redesign of its site, which has made the web experience cleaner and more intuitive, and includes a refined filtering system to make it easier to search and filter deals, as well as an updated map and list feature that allows users to check out deals in their area, a la DealMap.

That being said, to offer a complete service to its users, 8coupons needs to go beyond being just another aggregation and distribution platform, to a full-featured hub that allows visitors to discover, buy, organize, and create daily deals. 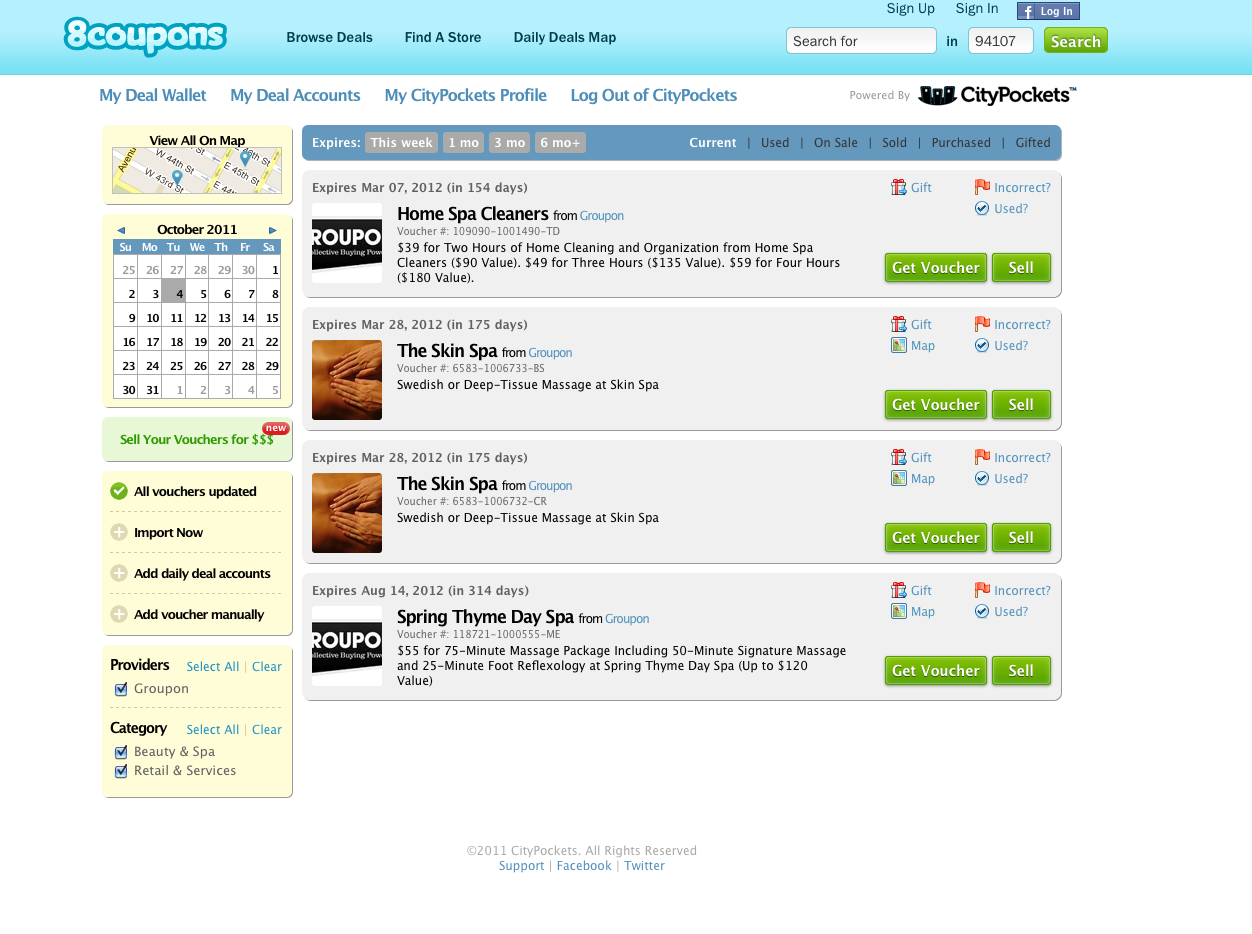 To do this, the startup has teamed up with an awesome young startup called CityPockets (you can read our writeup of the NYC-based deal wallet and resale marketplace here) to enable daily deal enthusiasts to track and manage their purchases to boot.

With its CityPockets partnership, 8coupons users can now organize their deals, get reminders when their deals are about to expire, or resell the daily deals they’ve already purchased directly on 8coupons.com. On the flip side, CityPocketers will be able to discover and buy live daily deals from 8coupons’ bullpen of deals from Gilt City, Buywithme, Groupon, etc., right from CityPockets.

8coupons has also recently launched its API, with CityPockets and sites like Topix acting as early adopters and testers.

In terms of monetization, Ung told me that the startup had previously remained profitable through display ads, but its new design notably features fewer display ads, as the startup is transitioning to a straightforward affiliate advertising model. The affiliate model, in which online merchants agree to pay 8coupons in exchange for providing an advertisement and link to the merchant’s site, (most of it is cost per action, Ung says), now comprises over half of the startup’s revenues.

For more, check out 8coupons’ new redesign here and its iPhone app here.