If you were hoping for a brand new iPhone 5 today, you might be a little disappointed. Instead, Apple announced the iPhone 4S, which looks exactly like the iPhone 4—on the outside. On the inside, it’s a whole different story, and that the message Apple tried to get across during its presentation today. So let’s unpack the iPhone 4S and take a look at its guts to see what’s new.

First, and most importantly, the iPhone 4S will be powered by a new A5 processor. The A5 is a dual-core processor which will be up to twice as fast as the current A4, and seven times faster processing graphics. Apple is also claiming faster data speeds (with maximums of 14.4 Mbps download speeds, and 5.8 Mbps upload). The battery life is slightly longer *8 hours talk time versus 7 hours for the iPhone 4), but standby time is much less (200 hours versus 300).

Second, it’s got a dual CDMA/GSM chip for different networks, making it a world phone (and cheaper to manufacture to boot since Apple won’t have to make two different models for different carriers). The antenna is also redesigned to improve call quality (AT&T should be loving that tweak). There are actually two of them, which can switch between transmitting and receiving. 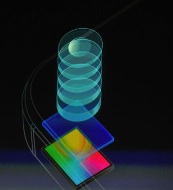 Third, the camera is much better. Not only is it an 8-megapixel sensor with 60 percent more pixels than the one in the iPhone 4, but it is also designed to capture 73 percent more light 33 percent faster. The camera includes a high end infrared filter as well as five layered lenses which should improve the sharpness of pictures by up to 30 percent. And since the camera is one of the most used features on the phone, double-tapping the home button now opens the camera. The time it takes to get off your first shot is 1.1 seconds, and half a second for each shot after that. And it shoots 1080p video as well.

That’s the hardware. The iPhone 4S also will ship with iOS 5, and all the iCloud-enabled apps. AirPlay will aslo work on the phone so that you can stream videos wirelessly to your Apple TV.

But the biggest new piece of software that takes advantage of the A5 chip is the Siri Assistant, a voice-controlled assistant you can call up anytime by holding down the home button for a few seconds. You can ask it the weather, time, directions from Yelp, schedule a meeting on your calendar, reply to messages, play a song from iTunes, or ask any factual question via Wolfram Alpha. All with voice commands.