Wikets, Inc., a young social commerce startup, announced today that it has raised $1.5 million in seed funding from venture firms Andreessen Horowitz and Battery Ventures, as well as from six angel investors, including Robert Davoli of Sigma Partners. The startup will use its seed capital, says Wikets co-founder and CEO Andy Park, to ramp up hiring and prepare for the release of its eponymous iPhone app, which will reward users for providing and sharing recommendations on products and places to their friends — while on the go.

From this brief description, Wikets may sound a little bit like a game-ified rewards system overlaid on, say, Yelp. While the Wikets team is not yet sharing all the details of the app’s UX — as the team is busy putting the finishing touches on the app ahead of its expected release date in early October — nut, to be sure, Wikets is more than a Yelp with badges, designed instead around social commerce, around helping users discover and connect with like-minded people based on shared favorite places and products. 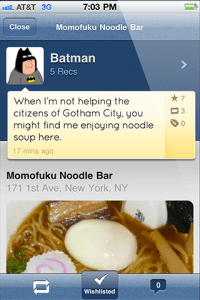 The social graph is becoming (if it hasn’t always been) the source of our most trusted recommendations; while Netflix’s impressive recommendation engine relies on a complex concoction of algorithms, and other familiar services might prefer similar machine-enabled (or hybrid) recommendation systems, it’s hard to argue against good old human curation and friendsourced recommendations. Especially for the very simple reason that they come from those we trust — people who know who we are, what tastes and preferences define us, or what makes us tick.

Park identifies this trend in many people: When a friend takes one up on a recommendation, they are inherently showing trust in that suggestion, and by extension showing trust in us, so Wikets is therefore designed to reward friends for offering valuable, actionable recommendations on products and places (as well as the ability to discover like-minded strangers who will have the possibility to become trusted sources themselves).

The co-founder says that the application will combine the social graph with friend filters and geolocation as the foundation for those trustworthy recommendations. And, instead of simply becoming a mobile scrapbook for people to add photos of products or favorite places, Wikets will offer (through various partnerships with retailers, etc.) a full, searchable database so that users can focus on suggesting products and places they love to people who will likely feel the same way.

Wikets will allow users to connect directly with each other, share preferences, and receive updates via email et al on what their trusted sources are recommending. Then, when another user takes one’s suggestion, both are then rewarded with points. Once users accumulate a certain number of points, they will become eligible to receive real prizes. At this point, Park says, those prizes will likely take the form of gift cards.

Yet, as the iPhone app will be free (made-for iPad and Android apps are next on the agenda, by the way), Wikets will need to keep its eye on the formulation of a killer business model. Although the team has yet to solidify its plans for monetization, likely revenue will come in the form of taking a cut when a user’s recommendation turns into an actual purchase, be it of a product, a hotel room, for example.

Wikets can also become an attractive platform for brands looking to find, connect with, and leverage their most loyal customers and passionate advocates, and likely the types of prizes Wikets will offer down the road might come in the form of featured products offered by partnering brands.

Be that as it may, Park reiterated that Wikets is keen on making sure that its “social” components will not simply manifest in the old cut-and-paste Facebook and Twitter integration. While users will be able to blast product recommendations out via their favorite social networks, look for the app’s social features to center around how it will use one’s preferences and location to identify the things they like while they’re on the move (and perhaps in a store) and connect them with people who have similar interests nearby to offer realtime, pertinent recommendations. For those not standing in the aisle of a retail outlet, users will of course be able to go buy those products from retailers’ digital stores, right from the app.

As to who is behind Wikets? The startup was founded by Andy Park, Vijay Manwani, and Ravi Reddy, who formerly built data center software provider BladeLogic, which was sold to BMC Software in 2008 a year after its IPO.