I’ve been using a pretty cool app of late called Fantastical. It’s OS X-only but I suspect the Windows crowd would get a kick out of it as well.

Basically it’s a natural language calendar app. You can paste (nearly) anything into its little window and it will automagically create an event. “Dinner with Joe at 5pm on Thursday” works just as you would imagine it would and unless today is Thursday, Fantastical will figure things out. It fumbles sometimes with word order and ends up setting all day lunches with “Tuesday” but most of the time that’s reparable with a few keystrokes.

The app does reproduce some of the features of OS X Mail, especially the automatic date entry features, but I’ve found that I use it to record flight times by copying and pasting them from the airline website and I’m able to create ad hoc events (“Drinks with T-Pain 5pm Weds”) and even simple reminders (“call Dalai Lama tomorrow”).

The company, founded by school chums Michael Simmons and Kent Sutherland the app has been around since May. There’s a new update coming shortly that will enable in-line calendar entry editing. The app costs $20 and is available for a free trial.

The pair built their own CalDAV implementation so it works with almost any calendaring service. It also has a custom alarm setting as well as complete search functionality. Again, it’s stuff that has existed before, but now it’s in one place with a quick and easy interface. It, along with apps like QuicKeys, has streamlined my day-to-day PIM and writing activities considerably. We don’t review a lot of apps on TC (we’ll probably start adding app reviews over time) but this is an app that I got a big kick out of and I think it’s quite simple and quite useful. 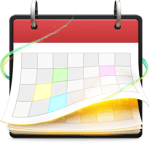