Last we heard, video had killed the radio star. But thanks to the Web, radio is finding new distribution channels and a new mobile home. When you think of Web radio, you might think of Pandora — and for good reason. Stitcher is looking to find its way into your podcast playlist by becoming the Pandora of web talk radio. So far, so good. The startup’s apps currently stream over 6,000 shows that cover everything from news and entertainment to sports and comedy. On iOS, Android, or Stitcher.com, listeners can find NPR, Fox, The Onion, the NYTimes, and even a little old blog called TechCrunch — Stitcher’s play at becoming a discovery tool for all things talk.

Today marks another victory for web talk radio as Stitcher announced that it has closed a $10 million series C funding round, led by New Enterprise Associates. The round also included returning investors such as Benchmark Capital, New Atlantic Ventures, and Silicon Valley veteran investors like Ron Conway. As part of its series C raise, New Enterprise General Partner Ravi Viswanathan will be joining Stitcher’s board of directors. The new round brings Stitcher’s total funding to just under $19 million.

According to the Stitcher team, the funding will be used to continue building out its content offerings and to ramp up hiring for its direct sales team. The funding follows on the heels of Stitcher’s release of a new iPhone app last week, which introduced a major redesign to its iOS mobile service. One of the most compelling changes included giving users the ability to more easily create custom stations from scratch. To go along with a more seamless and user-friendly UI, Stitcher introduced an “Add Station” button to users’ profiles to give custom station creation one-click functionality. 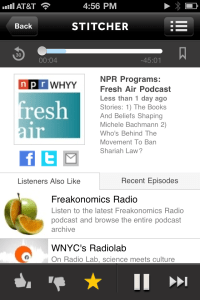 As for many burgeoning web startups, mobile has been a growth area for Stitcher. According to Stitcher CEO Noah Shanok, the company has “added about a million new users in the last five months, with the largest increase in listening coming from mobile devices. We only expect that growth to accelerate in the coming year, especially with the explosion of smartphones hitting the market and the number of car manufacturers adopting Internet radio in their new models”, the CEO told TechCrunch.

In an effort to do for talk radio what Pandora and Spotify have done for music, Stitcher is trying to take full advantage of both the mobile and automotive market. As terrestrial radio represents a $5 billion advertising market, the potential for Stitcher and others in this space is huge — and it starts with offering a personalized radio experience for both mobile and mobile automotive. As to the latter, Stitcher is currently available in vehicles through For SYNC and Buick IntelliLink’s connectivity systems. With its new funding in tow, the startup plans to continue expanding into these markets.