Mike first covered Amie Street back in 2006. At the time, he was a big fan. Back then, the startup was targeting a new music model, which allowed musicians to upload their songs to Amie Street’s platform, offering those tracks to listeners for free. The more downloads the songs attracted, the price would slowly increase — the price then indicating the song’s popularity. In what now looks like a savvy decision, Amie Street sold to Amazon last September for an undisclosed amount, deciding to focus its efforts on Songza: The social Internet radio service it acquired in 2008.

Today, after much iterating and tinkering, Songza is launching free mobile apps for iOS and Android that allow users to create and share personalized music collections — in the comfort of the cloud. Songza Co-founder and CEO Elias Roman likens the service to a “music concierge”, in that it serves users with playlists created by experts (and friends) for whatever mood or musical experience you could possible want. “The future of music will be driven by the convergence of expert and social curation”, the co-founder said.

While iTunes, Google Music, and beyond offer some neat customizable playlist options, Roman has a point. We are more likely to go in for playlists created by musicians, critics, and DJs we trust — as well as those created by friends — elaborate algorithms can only take one so far. Pandora and its Genome Project being a terrific example. 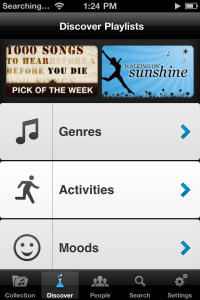 Today, listeners want big, free music collections that are easy to build, easy to keep fresh, accessible anywhere and sharable with their friends. Roman said that he thinks Songza offers just that kind of solution, as it features over 75,000 playlists created by actual people (including music experts, celebrities, artists and record labels), as well as allowing any user to create their own playlist from Songza’s library of over 14.5 million songs.

And speaking of Pandora (and Spotify to boot), Songza’s value proposition is significantly aided by the fact that it is free of audio advertisements and has no monthly listening limits.

The startup also announced today that it has closed a seven-figure round of financing led by investors that had previously backed AmieStreet.com, including Deep Fork Capital as well as an “undisclosed strategic investor”. Also participating in the round was Geoff Judge, co-founder of 24/7 Real Media, who will be joining Songza’s board of directors.

The startup’s new mobile apps for iOS and Android not only allow users to create personalized and sharable music collections in the cloud but also offers social discovery functionality via Facebook by allowing users to tap into the playlists their friends are listening to and creating.

Along with social discovery, Songza’s mobile app users can take advantage of expert-curated discovery through the startup’s bullpen of playlists that run the gamut in activities, genres, moods, and cultures. Users can find playlists for dinner parties, coding, or BBQ-ing, for example.

Songza is trying to offer a music experience that is comparable in the breadth of its feature set yet distinguishable enough in concept from popular music services like Spotify, Pandora, and Turntable.fm to make a mark on the music space. A monopoly on streaming playlists seems to be the end game. But chime in and let us know what you think.