Over the past two days, I’ve been working with a prototype Windows 8 tablet – really a PC – and finding that instead of a disappointing mish-mash of Windows XP and some strange touch UI that the Windows Metro/desktop system is actually quite cool and quite intuitive. The next Windows 8 is, in one way, nothing like the Windows versions that came before and, in other ways, an iterative improvement over what we know as the Windows Desktop.

There is no post-PC world. Everything that runs Windows 8 is a PC. That’s right – this tablet is a PC. In one way, this nomenclature allows Microsoft to avoid the “better than iPad” argument entirely and, on the other hand, it’s an ingenious way for the company to invigorate the faltering desktop market.

The cloud is serious. Microsoft has invested quite a bit of time and effort into their cloud systems. For example, chats held in Microsoft Messenger will be persistent from computer to computer. Profile pictures on your login screen will appear on every machine you log into. Security is granular – your data is safe on the machine or can appear in the cloud. It’s your – or your IT department’s – choice.

Anyone can be a programmer. You can build a usable app in HTML5 and Javscript that will run on Windows 8 and, presumably, Windows Phone. Like iOS, Windows is the DNA of a new breed of device, one that uses the core code that we’re used to and expands – or contracts – it as usual.

Windows isn’t huge anymore. Because of the cloud, Windows can actually boot off of a USB key. Obviously there are some very specific reasons to boot off of a USB drive, but it’s cool because it can. Windows now exposes different APIs based on the hardware on which it’s running which makes it work on ARM machines as well as the fastest x86 processor on the market.

There are other ways to work. Windows 8 supports pens, handwriting, touch and, presumably, voice, dance, and song as inputs. You can, for example, add a mouse and keyboard and have a great PC or you can carry the device around for Windows on the go. The device we tested, obviously, has a huge, weirdly-sized screen but otherwise it is a perfectly serviceable workhorse.

Like it or not, Microsoft owns a massive part of the PC business. Is Windows 8 perfect (at least in this early incarnation?) absolutely not. But this version is very… interesting. I love Metro. It’s a fascinating rethinking of the Windows Phone interface and is very similar to Lion’s LaunchPad and Mission Control views. It’s jarring to see the device dump back into standard Windows mode – all of the windows, icons, and buttons look sad and forlorn next to Metro.

This is Windows 8. There’s nothing we can do about it. It’s aimed at consumers, it’s touch-enabled from the ground up, and its an exciting departure from the old. The compromises made by Microsoft in this release – the reliance on old windowing methods is the most glaring – but it’s clear that the cloud access, the new touch interface including handwriting and finger-based UI handling, and all of the improvements, including the slow destruction of the legacy Registry – are all the right way to go.

Plenty of people will be quite comfortable and excited about this OS. Plenty of IT guys face push-back, exasperation, and clamoring to return to the original way of doing things. In the end, Microsoft will win. It’s hard to maneuver a juggernaut, but when its moving don’t stand in its way.

Devin Coldewey here. I spent a little time with Samsung’s prototype hardware, not enough to get used to it but enough to get some first impressions. It feels a bit bulky, but this is part of the compromise when you make something that essentially doubles as a PC. I would feel perfectly comfortable popping this into the dock and doing a day’s work from it.

Switching between Windows 8 and… Windows 8 “original flavor” feels a little weird, though it’s very snappy and will likely become second nature. I really hope that Microsoft’s developers can make it worthwhile to use both modes, otherwise people will end up spending 80% of their time in the part they like, and resent the 20% of time they have to spend in the other.

Quality control in the visual and UX departments is going to be more key in Windows 8 than ever before in Microsoft’s history since Windows 95. This is a major change and if they half-ass it or have lax standards, they’re going to lose control from the start. 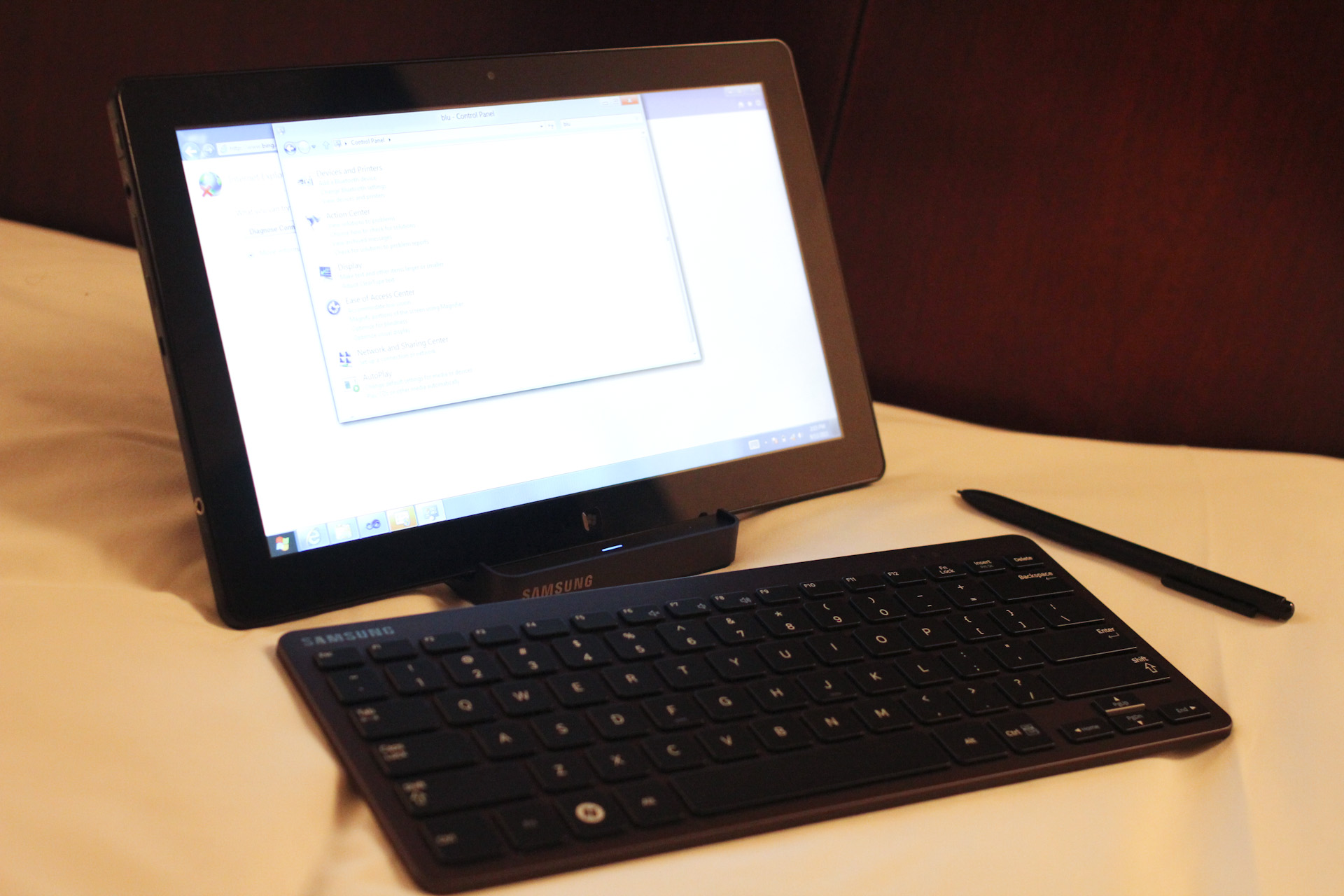 The keyboard and dock are pretty anonymous, but worked fine. I had to go into old-school control panel to find the Bluetooth panel, but that’s just an implementation thing that’s not quite there. The control panel panel felt nice: settings you care about, presented cleanly and attractively. Compared to the iPad’s control panel, this one feels more powerful and easier to use.

The hardware is workmanlike. As a tablet it felt too big, the aspect ratio off by a bit. 16:9 at that size feels somewhat unbalanced. As a small display it felt just fine, though. 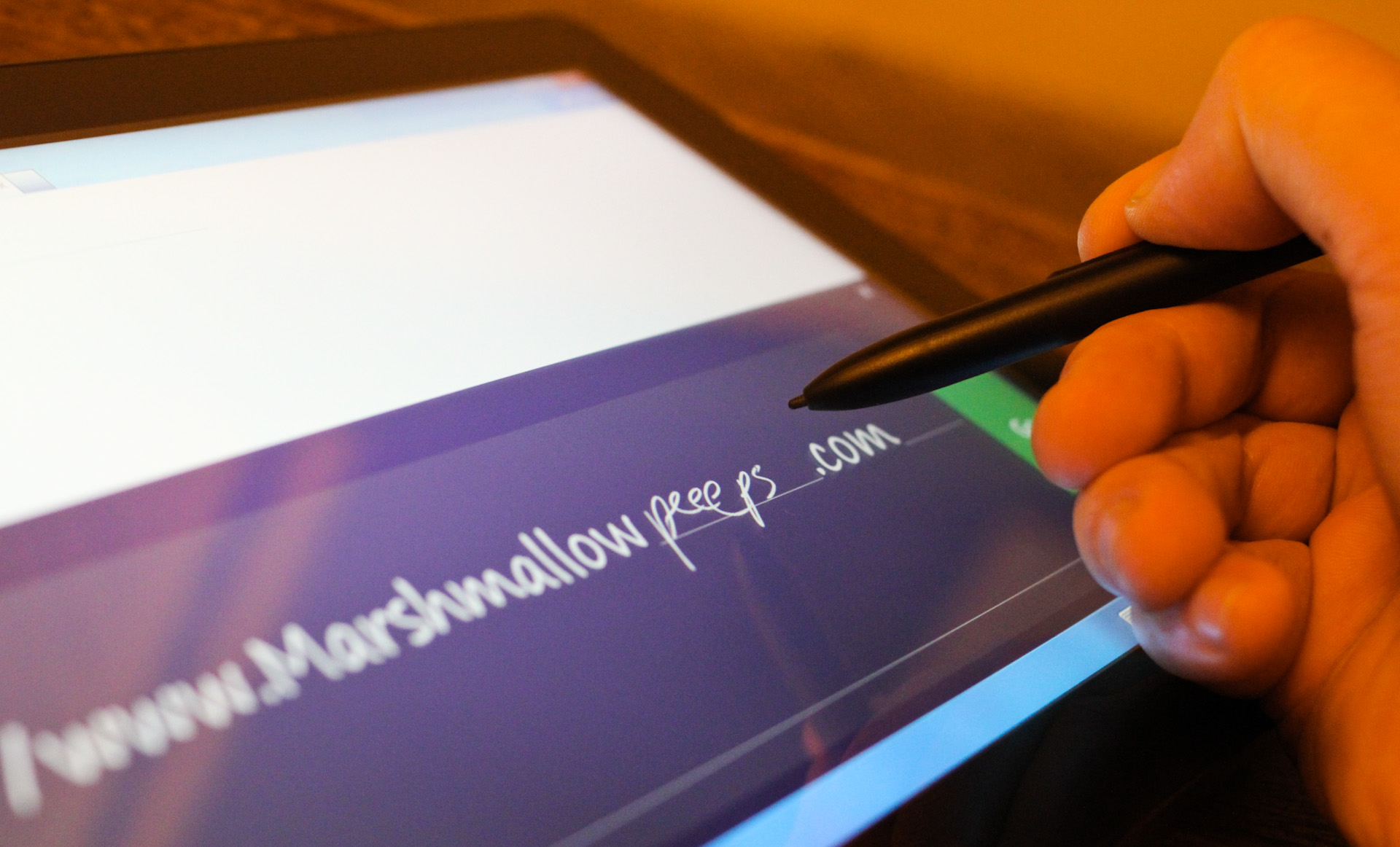 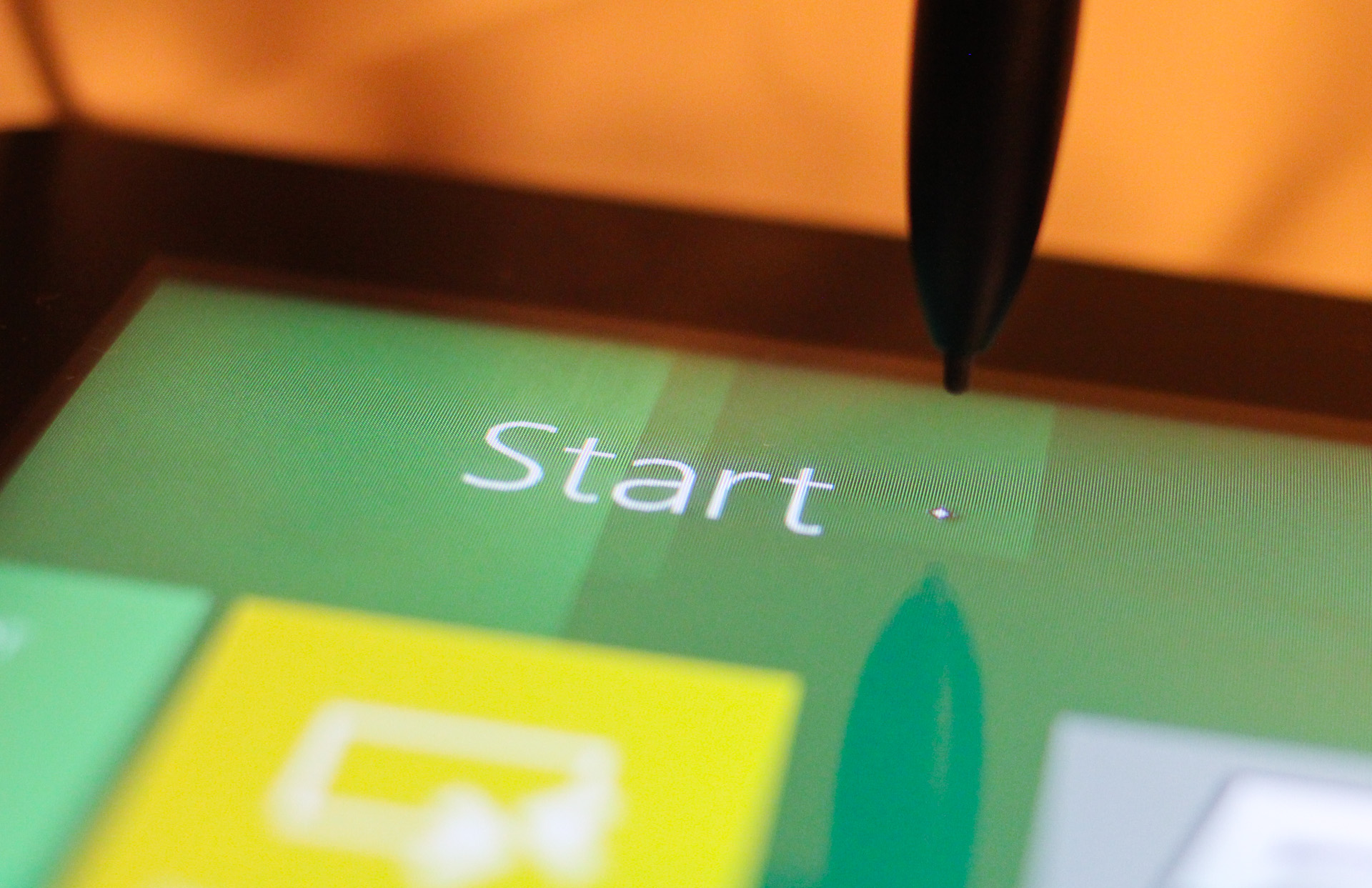 Handwriting recognition is great, and the touchscreen was responsive to both pen and touch. If both are going to be primary modes of input, though, it should really be more intuitive switching between writing and the regular keyboard.

I’m going to try to work from this thing for a while and see how I feel about it. This is early hardware and early software, so I don’t want to be too harsh or commit to recommending something that may change significantly later.

Take a look at the shots below to see some of the UI elements and features I thought were interesting on first inspection. We’ll follow up later with more in-depth impressions and some video.