Japan’s biggest mobile carrier NTT Docomo is stepping up its efforts to bring Xi, its LTE service, to the masses: today, the company announced two tablets that are compatible with the standard for the Japanese market, the Galaxy Tab 10.1 and a new device from Fujitsu, the so-called ARROWS Tab LTE F-01D.

Both tablets will be released next month, come with Android Honeycomb, and have the Japanese versions of Hulu and Qik pre-installed. While the Galaxy Tab 10.1 is largely the same that’s sold elsewhere (just with LTE support), the Fujitsu tablet is more interesting.

It has a waterproof body (so you can take it to the bathtub with you – a selling point, especially in Japan) and features a special gesture control function that allows you to slide its screen without touching it with your finger (important when you’re cooking, for example). 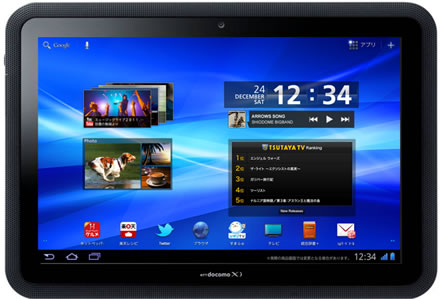 Here are the main specs of the Fujitsu Arrows: