Salesforce’s ‘social network for the enterprise’ Chatter has been the company’s first real foray into incorporating social with business functions. Salesforce originally announced Chatter back in November of 2009, and the application launched into public beta in June 2010 after four months in private beta. Salesforce has said publicly that Chatter has been its most successful product launch to date, even spending millions on a Super Bowl ad for Chatter. And recently Salesforce rolled out a new, more Facebook-like version and made the application free for users, with premium features as an optional add-on. And today, in conjunction with the company’s Dreamforce conference (the theme of which is the social enterprise); Salesforce is debuting a brand new Chatter complete with realtime chat, support for customer groups, a new API, and a brand new HTML5 mobile app.

As Al Falcione, Salesforce’s VP of Product Marketing, tells me there are three main components to a company’s strategy for social enterprise. First, the company has to develop a social customer profile, which captures a company’s likes on Facebook, Twitter communications, connections on LinkedIn and more. Basically, customers want social insight into the web presence of potential company they are working with.

Second, a company needs to develop and employee social network, where a company’s employees can exchange internal, realtime communications and collaborate on work. And third, Salesforce believes that companies need to develop a Customer Social Network and a Product Social Network. Customer social networks allow companies listen to and engage with customers in an entirely on social channels like Facebook and Twitter. And companies can also bring their products into social networks so they can be part of the conversation, allowing consumers to not just “fan” a product, but become its “friend’”

And these premises are the basis for what Chatter has become in this iteration of the ‘Facebook for the enterprise.’ Salesforce Chatter is debuting ‘Chatter Now,’ which adds realtime chat into the applications. Chatter users will be able to collaborate with colleagues, directly in Chatter and see when their colleagues are online (similar to the way you can see your Gmail contacts online), chat with them and share their screen without leaving their Chatter feed. In fact, the whole Chatter experience resembles a cross between Facebook and Gmail.

Another new feature that will be added in the next version of Chatter is the ability to create private, social groups for customer interactions. So Chatter users will be able to invite people outside of their organization into their Chatter network to collaborate in these private, secure groups. Within these groups you can share files, comment and more. To invite a client into a group, you can simply send an email invite which will contain a secure link.

Lastly, Salesforce wants to allow Microsoft Sharepoint and others users to leverage their files inside Chatter and bring collaboration to files in Sharepoint. Companies will be able to embed Chatter feeds in a SharepointMySite or TeamSite and share documents from Sharepoint to Chatter. And ‘Chatter Connect’ makes other third-party applications social by extending Chatter into other applications, such as intranets and portals, custom mobile apps and other enterprise apps.

Similar to many consumer applications like Pandora, Salesforce is leveraging the power of HTML5 to provide a rich mobile experience to users. ‘Touch.salesforce.com’ is a new mobile site that has been built using the latest HTML5 technology, and will allow for cross-platform access for all of Salesforce’s applications in the cloud, including Chatter, the Service Cloud, CRM and more. And all 220,000 custom apps built on Force.com will be mobile with touch.salesforce.com.

As Falcione explained social networking and mobile web use is so prevalent in the consumer everyday experience, it makes sense that these actions will bleed into the work environment. And this is much easier accomplished in the cloud. The newest version of Chatter, with private work groups, realtime chat, screen sharing and more aims to replicate some of the features offered by Skype, Gmail, Facebook and others.

The social enterprise is no longer an afterthought for many companies; and we may be at the cusp of a huge movement (that is worth more than $1 billion in revenue) that is even bigger than creating the ‘Facebook for the enterprise.’

The major question is how many ‘social enterprise’ applications do we need in the enterprise, and will there be a few players who dominate the space, similar to the way Facebook and twitter dominate the social consumer space. Jive just filed for a $100 million IPO, Yammer is growing, and there is some consolidation already taking place. We know Salesforce’s CEO Marc Benioff is extremely bullish on social and will continue to put resources into Chatter and the company’s social strategy. I’m sure we’ll hear more about Salesforce’s social plans tomorrow at Dreamforce, but it should be interesting to see how the space evolves over time. 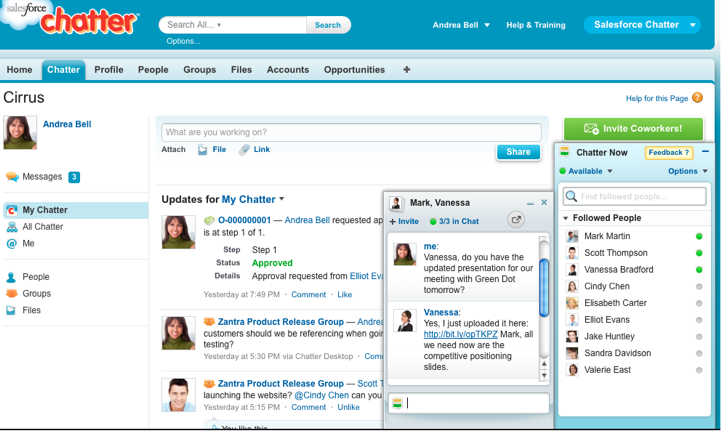 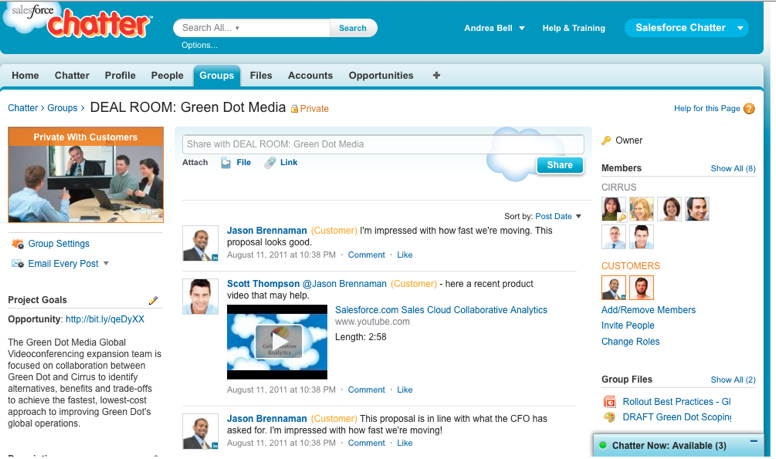