T-Mobile customers have gotten quite a bit of mileage of out their No Overage data plans: while everyone’s careful not to use the word “unlimited”, T-Mobile’s approach still let users gobble up as much data as they wanted so long as they didn’t mind a (pretty drastic) speed decrease.

At 200 MB and 2 GB, T-Mobile’s smartphone data tiers look familiar, but the No Overage gimmick gives customers the best of both worlds: tiered data pricing and unfettered usage.

Actually, let me rephrase that: the No Overage gimmick gave customers the best of both worlds. According to a report from T-MoNews, T-Mobile will very shortly be changing the terms of their 200 MB data feature. Instead of letting customers continue to use their data connections at reduced speeds, T-Mobile is returning to the classic overage fee model.

Going forward, Classic plan customers will be charged for overages at $.10/MB, with the charge topping out at $30. Customers with Value plans will have to deal with the same, save for a maximum overage charge of $35.

The reason? Apparently, demand for the 200 MB feature has “exceeded T-Mobile’s expectations” and they will be reverting to charging overage fees starting August 13. No word yet on whether T-Mobile’s other No Overage data plans will suffer the same fate, but it’s certainly something to keep your eyes peeled for all the same. Worry not, existing T-Mobile customers: if you’ve got the feature currently, then you’ll be grandfathered in for the foreseeable future. If you were planning to jump on the T-Mobile bandwagon, you may want to do it soon, before this deal goes the way of the Dodo. 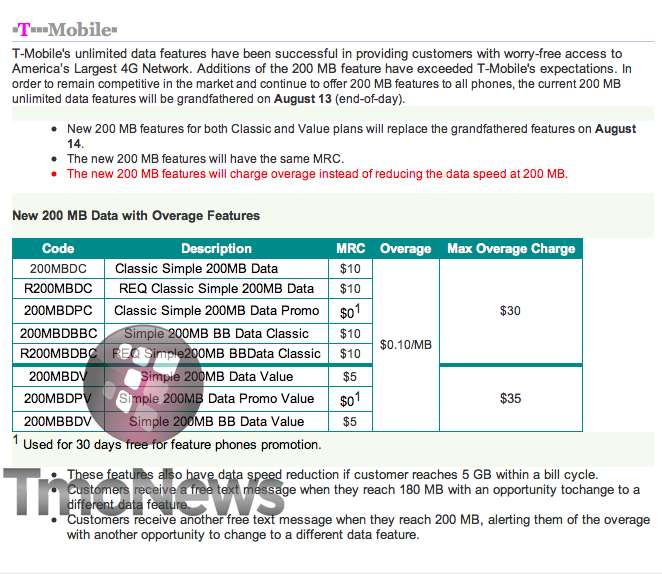