We’re big fans of online movie clips site Movieclips.com, which launched in 2009 as a search engine with over 20,000 different clips from thousands of titles from the libraries of 20th Century Fox, MGM, Paramount, Sony Pictures, Universal Pictures and Warner Bros. Pictures. Today, the company is announcing that it has raised $7 million in funding led by MK Capital (a founding investor in Machinima, a large gaming publisher on YouTube). Shasta Ventures, First Round Capital, Richmond Park Partners, Jeff Clavier, Naval Ravikant, Jeff Kearl, Tom McInerney, Allen DeBevoise and Gordon Rubenstein also participated in the round. But that’s not all. Movieclips is announcing a lucrative new, Vevo-like deal with YouTube, to bring all of the startup’s licensed Hollywood HD movie clips to the online video platform.

As you may know, along with the studio partnerships (which is half the battle for licensing movie content), Movieclips has also developed proprietary technology that assigns up to 1,000 points of data to every scene, making it super easy to find scenes by actor, film title, dialogue snippet, mood, director, genre, etc. This data enables people to search and discover movies through curated lists and games. Last year, the startup launched a new product, called Movieclips Mashups, at TechCrunch Disrupt in New York, which allows anyone to make montages of two minutes clips.

Co-founder Zach James tells me (checkout our TCTV interview with James on the news) that the goal was to sign a distribution deal to upload the clips to YouTube, with the blessing of the studios, which are notoriously protective with their movie content. Especially on public sites with tons of traffic, such as YouTube.  In the same way that Vevo was able to partner with record labels to put music videos on YouTube, Movieclips is working to put film and movie clips on the video platform.

But James said that surprisingly, most of the studios were receptive to the idea of posting the clips on YouTube. Co-founder Rich Raddon explains, “There’s definitely an openness with the studios that has not been there before. Now that YouTube is looking for premium content partners, studios who would have laughed us out of the room a few years ago are actually listening. It’s all about the right timing.” Raddon says Disney was the only major studio that did not participate in the Movieclips deal.

So now, Movieclips will have a number of dedicated channels (found here) on YouTube, with breakdowns of clips by actors, movie types, genre, director and more. Clips will be able to be viewed anywhere YouTube is viewed. The company will also be adding interactive games, trivia challenges, clip mashups, trailers and clickable video formats. The clips will also be featured in the Movie Extras on the YouTube video on demand platform.

Camille Hearst, YouTube’s Product Marketing Manager for Music, Movies, and Shows, said this of the Movieclips deal, “There’s a sea of content that can add to a YouTube user’s movie experience thanks to Movieclips.com…We’re excited to be working with Movieclips.com to provide users with exactly what they’re looking for when they want to get more into movies on YouTube.”

As a side note, James tells us that he originally floated the idea out on-stage to Google VP Marissa Mayer while the company was presenting during TechCrunch Disrupt in May 2010. Apparently Mayer (and YouTube) were listening.

Considering Vevo’s success following the YouTube deal, this is a pretty big deal for Movieclips. Hopefully the startup will generate major cash from the deal, but the distribution platform alone is extremely lucrative in terms of generating views and for brand exposure. Vevo is seeing around a billion views a month and bringing in tens of millions in revenue.

As for the funding, James says that the new funds will be used to ‘double down’ on the YouTube opportunity. The company is also looking to expand into incorporate Movieclips into mobile and social platforms, including Facebook, Twitter, and the iPad (The site also launched a specialized video player and features an API developers can use to integrate Movieclips on other sites; AOL’s Moviefone actually uses the technology on its platform). 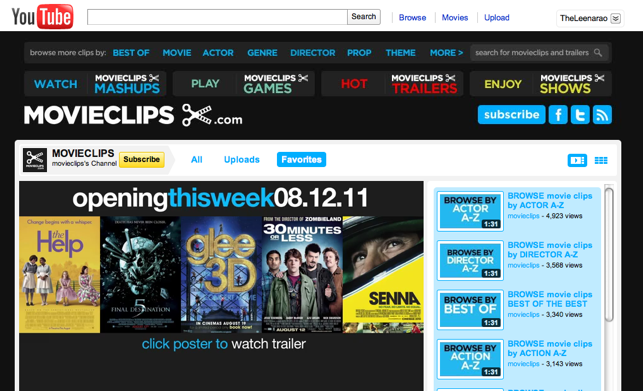