If you’ve got any smartphone made in the last year or so that isn’t made by Apple or Samsung, chances are preeeetty good that it’s powered by one of Qualcomm’s Snapdragon chipsets. Now, as for the chances that you could actually name which Snapdragon chipset it has… yeah, pretty much zilch.

The problem: outside of the overarching “Snapdragon” brand, Qualcomm hasn’t done the best job in differentiating which chipset is which. MSM8260? MSM855T? MSM8930? OMGWTFBBQ? I do this for my job, and I still wouldn’t be able to tell you which one is which without a cheat sheet.

This morning, Qualcomm is announcing a bit of an overhaul involving the Snapdragon brand. It should make things a bit less confusing.

In a nutshell, they’re moving away from the nearly impossible to remember model numbers and toward a tiered system. They’ll have four tiers (or “Systems” as they call them) to begin with: S1, S2, S3, and S4. The higher the number, the better the specs.

S1, for example, is for “Mass Market” phones — things on the lower end of what Qualcomm powers (anything 1Ghz or below). Things like the HTC Status, or the Droid Incredible. S2 is for “High Performance Smart Phones & Tablets” (up to 1.4 Ghz) like the HTC Thunderbolt, while S3 is for the current highest-end stuff (up to 1.5Ghz) like the EVO 3D.

S4 encapsulates everything between 1.6 Ghz and 2.5 Ghz — which, as you may know, doesn’t actually include anything just yet. The first devices in this range won’t start hitting the shelves until next year at the earliest.

Interestingly, Qualcomm notes that an S2 device will always be considered an S2 device — S2 won’t become S1, S3 won’t become S2, etc. As I’m understanding it, it sounds like Qualcomm plans to just keep adding new System tiers as time goes on. Man, S10 is going to be ridiculous.

Qualcomm will almost certainly still have big ol’ ugly model numbers in some way or another for the mega geeks among us to differentiate between similar chipsets — they just won’t expect anyone to actually remember them.

Here’s a look at what’s changed: 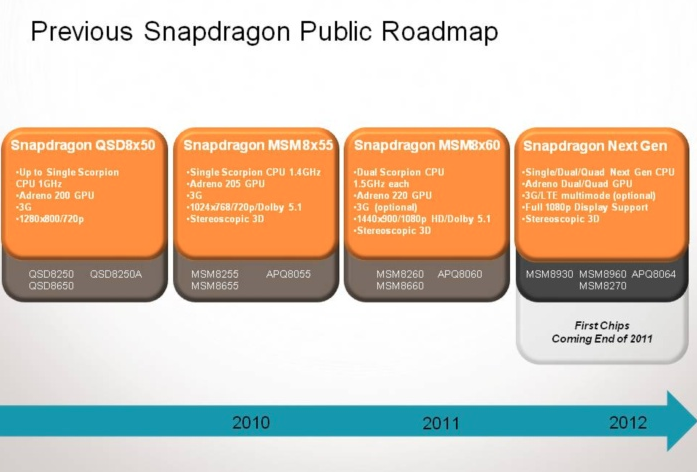 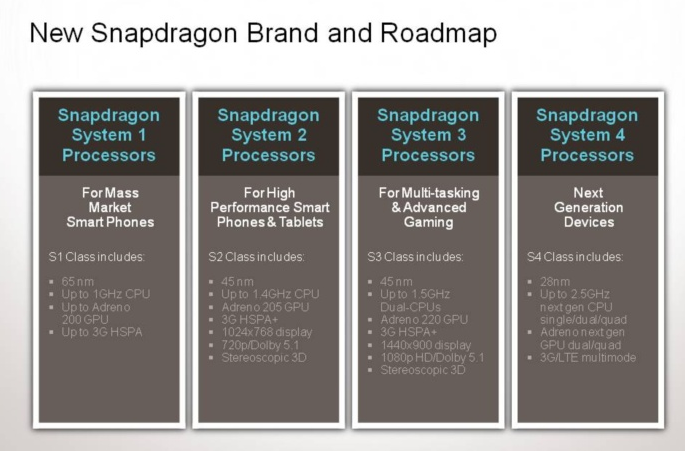