The news never sleeps, which is why news sites like TechCrunch are addicted to realtime information. That addiction extends to the analytical tools news sites use to determine which articles are resonating with people and which ones aren’t. Today, news sites are getting a special flavor of a tool many already use. It’s called Newsbeat. It’s Chartbeat on steroids for news publishers, and it launches in public beta.

Chartbeat is like a realtime Google Analytics for sites that shows you exactly what is happening on your site at any given second. (We swear by it here at TechCrunch, and it even powers the popular posts widget in the sidebar at right). Newsbeat will be familiar to any Chartbeat user, but it is redesigned to break out social traffic from other types and provides an early warning system for stories that are gaining traction or losing steam.

Newsbeat shows the same speed dial that is on Chartbeat which indicates how many people are on your site at any given instant. But now you can see a color-coded traffic chart that lets you see at a glance how much traffic is coming from social sharing like Twitter, Facebook, and emails (purple bars), direct traffic (orange), other sites (blue) and search (green). For the social traffic, which typically shows up as direct traffic in Google Analytics and other tools, Chartbeat figures out algorithmically which landing pages are most likely to be direct traffic (like the home page) versus coming from third party social apps (like an article page with a unique URL).

Below the traffic chart, Newsbeat shows the most popular stories and pages on a news site with how many readers are on that page, the biggest source of traffic (facebook, Twitter), and an arrow that predicts whether or not it is gaining traction. You can filter top stories by referring source, so you can see which ones are most popular among Facebook users versus Twitter, LinkedIn, email, or from a specific referring site.

Newsbeat also lets you drill down by section or author, and shows how each one is doing across different types of readers. There is also a tab that shows just Twitter activity, along with selected Tweets linking to articles. Moreover, access to Newsbeat can be set with different permissions so a section editor can see just their own section or a writer can see just their own stats.

Newsbeat has been in private beta with the Wall Street Journal, Time.com, and Forbes.com, but is now generally available to all news sites and large blogs. Chartbeat will charge $199 a month for access to the service. It is working on other customized versions for e-commerce and gaming sites. The next one will be called Shopbeat.

Chartbeat comes out of betaworks, but now occupies its own offices, employs 18 people, and is on track to bring in revenues in the single-digit millions. It raised $3 million a year ago. The regular Chartbeat service is now tracking 4 million concurrent users across all teh sites that use it, which is up from 2 million just last January. 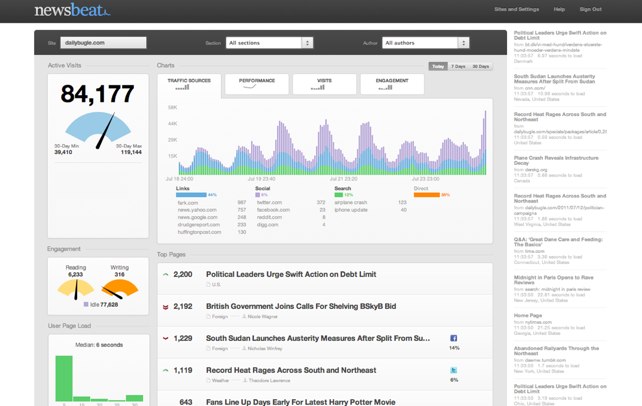 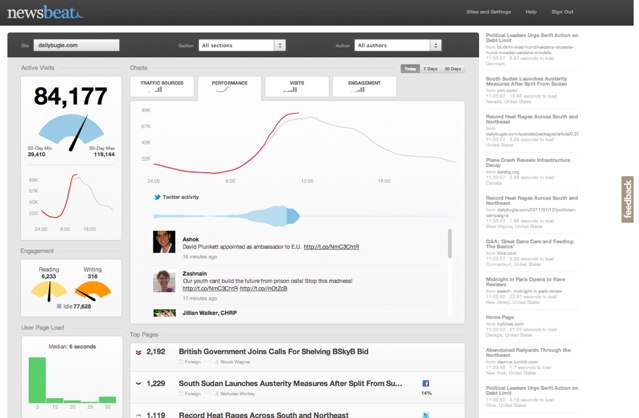