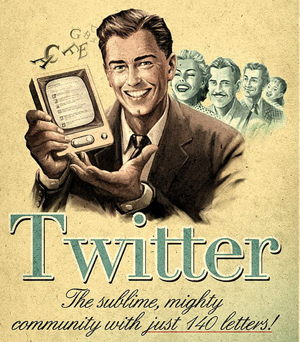 To the two of you that this comes to as a shock, one word: Inevitable. Twitter has made no secret of the fact that in-stream Promoted Tweets have been an eventual business model goal since April of 2010, when co-founder Biz Stone outlined a plan to launch them first on search on Twitter.com, later in 3rd party search and eventually in the user timeline.

“We’ve been talking about Promoted Tweets in the timeline since we launched Promoted Tweets …” Twitter’s Sean Garret tells me. “We have and will continue to take a measured and thoughtful approach to how we may display them.”

So while there should be little doubt that in-stream Twitter advertisements are imminently on the horizon, the question is whether users will take to them, or whether they’ll revolt a la #Dickbar, the controversial overlay to Twitter mobile that displayed Promoted Trends and eventually ended up being removed after much backlash.

A brief informal poll I conducted on, of course, Twitter revealed that despite the initial resistance many users were willing to support the in-stream ad model as long as Twitter gave them the opportunity to pay to get rid of it. Apparently people like having options.

Then again, actual user reaction will depend on the execution, look and feel of the final in-stream as product, which we know very little about. If the Promoted Tweets blink and take up your entire screen and look like crap then sure, users will be angry. However the guiding hand of an even partially returned Jack Dorsey leads me to believe that this will probably not be the case.

Twitter has also said that again that the Promoted Tweets will only be for brands that you follow or that are “relevant” to you based on whom you follow, but I really can’t see that philosophy being very profitable or holding up for very long, especially since I don’t really follow any brands and don’t know any one else who does.

The dilemma of Twitter advertising is a case of too much demand and not enough supply, which is why the prices on these things keep going up (Promoted Trends are now at $120K). From what I’m hearing advertisers are clamoring for Twitter to give them something to buy and the company has an ambitious and eager salesforce, tasked with selling the promise of one day being able to monetize most of its 300 million users.

But is charging brands $100K to have their tweets show up higher in the Twitter streams of consumers who are already their loyal followers the best solution?

Well Twitter’s got to start somewhere, and expand from there. As the Financial Times points out, Twitter is expecting a modest $100 million in revenue this year compared to Facebook’s awe inspiring $3.5 billion in projected display ad revenue. “They are going to get much more commercial,” one agency executive told the FT which also reports that the company is dabbling in Groupon-type deals, the final desperate frontier of monetization for many.

And will this inevitable thrust toward commercialization interfere with user experience to the point where users will be turned off from Twitter? Said one person familiar with the matter, “Users already have such a high tolerance for bugs, errors and latency on Twitter.com, they’re going to live with Promoted Tweets too.”

@alexia No, not at all. I want to be able to pay for analytics and no ads.

@alexia I don't expect to notice them: with all the activity in my timeline I miss out on most tweets anyway :)

RT @alexia: Regarding promoted tweets? There's no free lunch, I would say. We'll get REAL good at visually filtering those out, very soon.