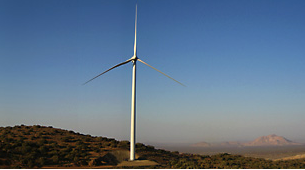 According to an official company blog post today, Google is increasing its investment into California’s Alta Wind Energy Center (AWEC) by $102 million, bringing its total investment in the renewable energy facility to $157 million.

The AWEC is being developed by Terra-Gen Power, primarily. The first development within the massive facility is the Alta-Oak Creek Mojave Project. Google’s latest funding commitment would go to build an extension at the facility. The AWEC has a transmission line, the Tehachapi Renewable Transmission Project, dedicated to it which makes it distinct from many, large-scale renewable energy projects that have been proposed in the U.S.

Over the years, Cape Wind faced challenges winning public opinion and regulatory approvals due to a lack of a transmission line that can send power generated offshore back to Nantucket or Boston, two large markets nearby. In 2010, as reported by Reuters then, Google, along with cleantech investment firm Good Energies and Japans’ Marubeni Corp., agreed to take an equity position in Cape Wind’s transmission line.

This year, Google has invested about $700 million into renewable energy projects, according to press statements by Rick Needham, the company’s director of green business operations.

Google also recently dedicated funds to financing SolarCity residential solar development, and to other large-scale solar and wind projects including at Ivanpah a solar power tower project in Nevada, and Shepherd’s Flat, the wind farm in Oregon.

A hearty tax appetite is partly responsible for Google’s move to become a clean energy financier of this magnitude. Google will reap the benefits of many tax credits currently available to investors in clean energy in the U.S.

Supporting clean energy and new additions to the grid could also help Google maintain a stronghold in search and big data; users will inevitably search for and process bulk amounts of information about energy production and use via Google, its APIs and apps as new sources of energy get plugged into the grid, and as utilities are forced by regulators to report more carefully on their environmental impact.