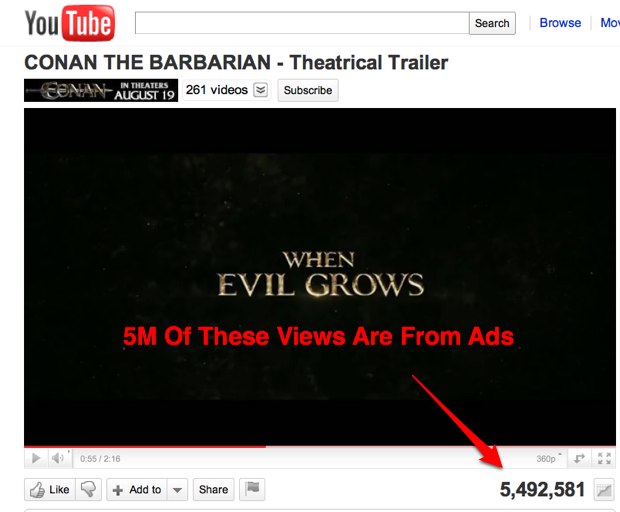 Movie trailers are among the most popular videos on YouTube. A typical movie trailer gets millions of views, but how many of those views are natural and who many are pushed as paid-for ads? Yes, movie trailers are all ads in a sense. But people seek them out just like any other 2-minute video. That is not what I am talking about.

The same movie trailers are also promoted through various means and shown as prerolls before other videos or via paid links and those views can also count towards the total. For instance, this trailer for the new Conan The Barbarian movie has been watched nearly 5.5 million times. If you click on the statistics right next to that number, you will see that 4.98 million of those views come from ads (see also below).

This is not an isolated incident. The trailer for Rise of the Planet of The Apes shows 7 million views, but nearly 5.8 million of those ad views. In this case, the statistics are hidden, but I got my hands on them (see second image below). Same for this X-Men trailer: 2 million out of 2.4 million views are ads (although this one is literally a 15-second teaser, not a full two-minute trailer like the other ones I’ve cited).

Not all ads count towards a view, but many do: Promoted Videos, skippable TrueView ads, homepage ads or search ads that drive traffic to the video page.

I find this practice to be surprising, so I asked YouTube for an explanation. A spokesperson wrote me the following in an email:

When it comes to paid advertising, view count of a video increases only when it’s clear that a viewer has made a choice to watch a video. For example, a viewer might make that intention known by clicking to watch a Promoted Video, opting-in to watch a TrueView in-stream ad, or playing a YouTube video embedded in a homepage ad.

To be clear, with standard in-stream ads where a viewer has no choice in its selection, we do not increase the videos view count.

Not every pre-roll ad counts towards a view, but all of those skippable, opt-in TrueView ads do count, and from the looks of things people are watching a lot of those. Some YouTube purists are up in arms about this practice. One commenter asks, “Remember﻿ when you could watch a video﻿ without having to﻿ sit through a commercial?”

There is nothing wrong with movie studios using their trailers as ads. After all, they are trailers (i.e., ads for movies). But when people search for videos, they tend to click on the ones with the most views. Apparently, those views can be bought. 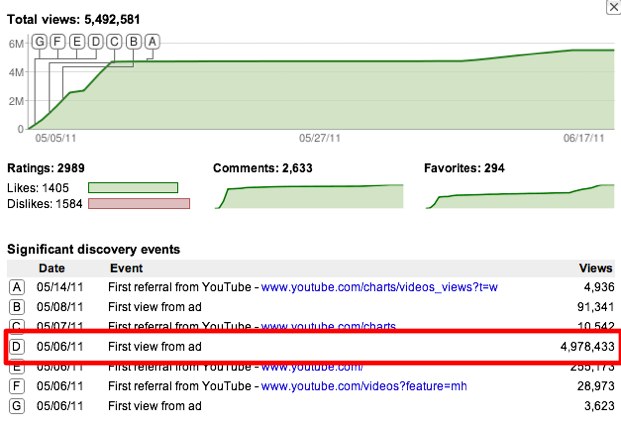 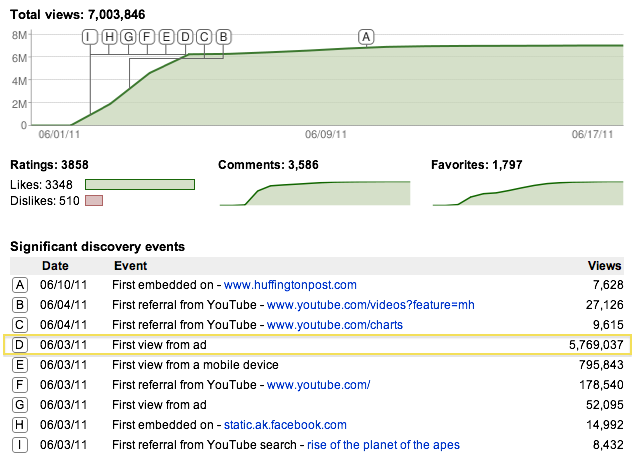