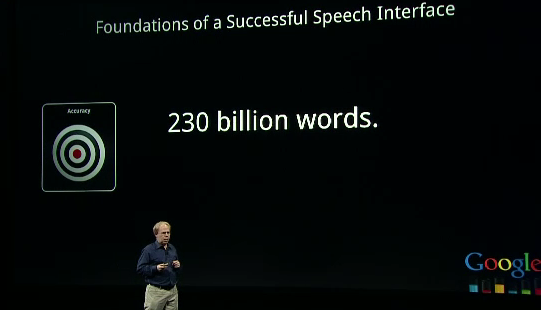 Google’s Mike Cohen took the stage at the search giant’s search event today, updating us on how voice search is performing. Cohen, who leads all of Google’s speech technology efforts, says that voice search is now available in 27 languages and dialects, and he estimates that voice search covers around 5 billion people or two-thirds of world’s population. Cohen also said that speech input grown by six times; and everyday, Google processes more than two years of non-stop speech.

Google also revealed a new feature in web search today—voice search for desktop. Basically the feature performs similarly to voice search on mobile. You click an audio microphone button in the search box, and speak your search into the computer.

The company says that the feature is leveraging Chrome’s voice technology (voice search for desktop will only be available via Chrome browsers for now). The new feature will be rolled out to Chrome users this week.

Cohen says that one of the goals for Google and voice search is ubiquity, meaning the feature is included in all of Google’s search experiences. For example, in Android phones, the ability to use speech and voice search to enter information is ubiquitous across any day entry on the phone, whether it be within an app, email or on a website.