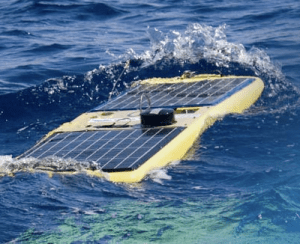 Liquid Robotics has raised a $22 million series d investment, led by VantagePoint Capital Partners. Based in Hawaii and California, the company makes wave-powered, marine drones that are remote controlled by satellite, and capable of roaming the seas unmanned to gather environmental and defense-related data.

VPCP’s cleantech portfolio includes: the now-public Solazyme, makers of algae-based chemicals and fuels; Tesla Motors the electric vehicle pioneers; a designer and builder of large-scale solar power plants, BrightSource Energy; and Ostara, a company with technology that removes phosphorous and other nutrients out of the ocean (where in too high concentration, they can harm marine life) and recycles these into sustainable fertilizers.

Oilfield services provider Schlumberger also contributed to the series d round in Liquid Robotics. The company’s vehicles are used today in oil field exploration and monitoring.