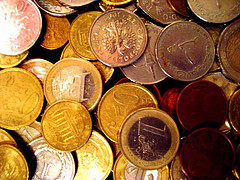 Bitcoin. Oh, man, where to begin. Its Hype-O-Meter got cranked to 11 this week, and breathless histrionics are everywhere. Death and Taxes called this new currency “a seismic event“; Adam Cohen says it’s nothing but a giant scam; Jason Calacanis calls it “the most dangerous project we’ve ever seen“; and they’re all completely wrong. It’s interesting, and innovative, and down the line it might even be important … but in many crucial ways, Bitcoin is nothing new.

Matthew Ingram at GigaOM wrote a good Bitcoin 101 piece, but a summary of that summary, for those too lazy to click: it’s an anonymous online currency whose transactions and monetary supply are verified by digital cryptography and maintained by an open-source peer-to-peer network. Computers on the Bitcoin network can also “mine” new bitcoins, which are generated at a fixed rate. And, crucially, no more than 21 million will ever exist. (~7 million are currently extant.)

“So what?” you may ask, and not without reason—but Bitcoins are in fact worth something. Right now you can sell them for ~$7 a pop at any of several Bitcoin exchanges. The EFF accepts Bitcoin donations. Creating a secure distributed currency infrastructure is no mean feat; creating one that people actually use is more impressive still. I don’t want to understate that accomplishment. But, people, we have been here before, many times.

In 1932, the town of Wörgl, Austria, introduced a new currency that was so successful that it is still referred to as the “Miracle of Wörgl“, although the Austrian government soon shut it down for violating the government’s monopoly on printing money. Communities have been experimenting with local/community currencies ever since. (Not to be confused with “company scrip”, the Internet equivalent of which is Flooz, or Facebook Credits.) Bitcoin is little more than a reasonably well-designed local currency liberated from the shackles of geography.

There is one key difference between Bitcoin and Wörgl; no government can shut down Bitcoin’s printing presses. (Which aren’t necessarily figurative.) And that’s exactly why it’s been so successful so far—enough anarchists and libertarians, who have long hated fiat currencies and longed for the return of the gold standard, have flocked to it that it actually has value. But they’re a tiny minority, extremely unlikely to grow into a significant movement, and even if they do, it won’t much matter. Currencies, be they fiat, gold, or fixed-supply, are a collective fiction: they only have value if a critical mass of people believe they do. If the US and EU want to kill Bitcoin, they need only make it illegal, and that critical mass will vanish.

But why would any American or European business adopt Bitcoin in the first place? It’s an elegant and disruptive solution desperately looking for a problem. There’s nothing wrong with the dollar, euro, or yuan. As Victor Grishchenko cogently points out in his analysis, “Any competing e-money system needs to offer at least the same level of security, coverage, liquidity and privacy, which is hardly the case with Bitcoin at this moment.” In the developed world, Bitcoin is a non-starter. At best it might eke out an existence as a distributed local currency for hardcore libertarians.

…but the developing world is another matter. Consider Zimbabwe, recently plagued by hyperinflation so rampant that when I was last there prices doubled every few weeks and gasoline could only be purchased on the black market with hard currency. They’ve since given up and simply adopted foreign currency wholesale. Meanwhile, mobile electronic payments are taking off in a big way all over sub-Saharan Africa. It isn’t much of a stretch to imagine Zimbabwe in ten years’ time—or a whole group of developing nations with a history of crippling inflation—adopting a new currency that is independent, incorruptible, and anti-inflationary by design. In short, something a whole lot like Bitcoin. No, it isn’t the future, but it just may point the way.

More Bitcoin links, for the terminally interested: OMG they’re all totally crazy. No we’re not. Bitcoin, our greatest hope for liberty. Bitcoin, the Wikileaks of monetary policy. Bitcoin will be made illegal. The Bitcoin bubble. Bitcoin’s collusion problem. The Bitcoin lottery. Reality distortion. The Napster of banking. BoingBoing discussion. Safer Bitcoin transactions. Betting on Bitcoin. Is the Bitcoin algorithm new? Namecoin.