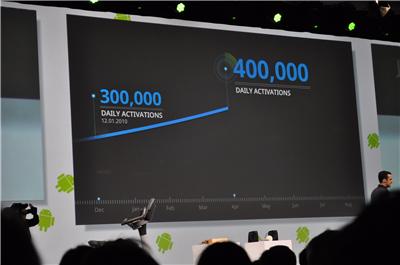 At Google i/o today, Google director of product management Hugo Barra dropped some numbers about the success of Android today, introduced by a video of a 3D Android robot scaling a mountain of Android activations. There have been over 100 million Android activations worldwide, through over 36 OEMs and 215 carriers. There are 450,000 Android developers, developing for more than 310 Android devices in 112 countries .

Android was activated on 100k Android devices a day a year ago and is now at 400k daily activations, Barra said.There are currently over 200K available apps on Android Market including Pulse, CNN etc.