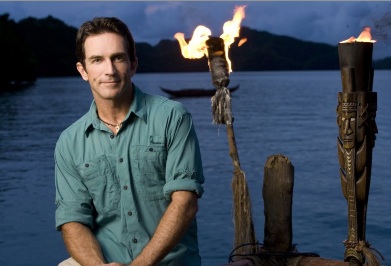 This Q&A with Survivor host Jeff Probst was conducted by guest writer Narendra Rocherolle, CEO of The Start Project. He and his partners hold the curious distinction of selling their company, Webshots, twice.  Narendra is an occasional contributor to TechCrunch, you can read a Q&A with Lance Armstrong here. He is @narendra on Twitter.

The CBS show Survivor is completing its 22nd season—a run with a business and social impact that are reserved for extraordinarily few productions in Television history. Survivor launched the Reality TV genre and has managed to continue to do well during a decade where the very foundations of TV have been shifting. The show’s host Jeff Probst has been a mainstay and a driving force behind the show’s continued innovation in storytelling.  I recently caught up with him to get some unfiltered thoughts.  If you have questions or comments you can direct them to @jeffprobst on Twitter!

What was the genesis of JeffProbst.com?  Can you talk about how all of your social media efforts are tied or not tied to CBS, your contract, etc.?

I’m fascinated by the major shift taking place that allows for truly global conversation with people all over the world. JeffProbst.com offered the opportunity to own my content and also provided the ability for me to take control of my voice and not have to rely on other outlets to accurately convey the things I want to share.

Survivor is a deceptively complex media property because you have multiple narratives: the game, behind the scenes details, and deeper looks into the actual participants. Building on these narratives, you are now live tweeting during Survivor shows (both East and West coast feeds).  Where did you get the idea?

I am a big Howard Stern fan and one weekend he tweeted while watching a re-run of his movie, Private Parts.  That was the inspiration for me to do the same thing with Survivor fans.  I wanted to continue the conversation and give them more of what they crave, which is behind-the-scenes information and personal insight. In addition, I learn valuable information about what is and is not working for the show.  It’s a very satisfying, albeit time consuming, effort.

I think Twitter is just another amazing step in the ongoing transition that will change so much of how we communicate as a world.  Twitter will not be the final frontier but Twitter and Facebook are definitely the pioneers.

Do you feel like there has been adequate production resources to explore these other narratives?

No. I feel we are in the very early stages of this global conversation and almost all of the traditional networks are very far behind when it comes to utilizing social media.  Initially, CBS didn’t know or care that I was tweeting.  Once they saw people tweeting back with comments like “I used to DVR, but now I watch it live” they took notice.  They are on board now but I still think we are in the early stages of what will be a global transformation.

In your mind, how has your role as host on the show changed over time?

I’m much more involved than I was in the early seasons. It’s been a natural evolution.  As the game has changed, so have I.  I have always had a point of view but CBS wasn’t comfortable including it in the show until around season five, Survivor: Thailand.  At that point things really started to evolve.  It’s a great job in that I get to be myself, say what I’m feeling without any fear of retaliation because I’m not playing for a million dollars.  I have nothing at stake.

Since you know the outcome (to the finalists) for each season, how difficult is it to blog and tweet without accidentally giving something away or unduly influencing perceptions of the story that is unfolding?

I always have somebody else proof it to make sure I’m not giving anything away, but in general I’ve become oddly comfortable forgetting what happened when doing interviews and just speaking as an audience member about what I see and what I think.

You recently conducted a fascinating Skype video interview with 3-time Survivor participant, Russell Hantz.  It is notable for many reasons (including being a video of a video, 15-minutes long, and having poor lighting).  Yet, It is incredibly compelling because it is the real thing, composed not long after the airing of an episode, and with a participant who is both wildly charismatic and creepy/off-putting.  What were your goals with that video?

My goal was to have an honest interaction with Russell.  To achieve that I felt it important that we limit the interference as much as possible.  Russell had never skyped before that night so it was definitely a new experience.  We shot the interview on my iPhone and uploaded it about 20 minutes after the interview.  There was great feedback and I would do it again but only with someone that I felt really had something unique to offer.

Is it strange to be producing and creating content that has a completely different quality than the high gloss Survivor shows?  Does this lend to authenticity or does it chip away at the brand that Survivor and CBS has been building?

I really haven’t done that much, but I’m not worried about chipping away at the brand.  Not at all.  If anything this adds to the experience.  The advent of all the new technology is fantastic in that it lets anybody be a filmmaker or story teller.  Anybody could have shot the interview with Russell and posted it on You Tube.  If your story is compelling nobody cares what it looks like. On the other hand, if your story isn’t compelling then it can be as pretty as a sunset, it won’t matter, nobody will care.

Why choose to have clunky Google ads on your site?  Is there no title sponsor that will step up to the plate?

Fair criticism.  We are new to this and experimenting.  Agreed.  They are ugly and don’t provide much content at all.  You may be the impetus to lose them all together.

Survivor TV audiences have cracked 20M viewers.  Your YouTube channel has 500+ subscribers.  How does starting from ground zero affect the way you look at the history of Survivor? Or media and distribution in general?

It doesn’t.  I’m not on a show that will ever attract that kind of attention again.  Our day was 8-10 years ago.  We’re no longer the new kid on the block.  This is a personal experiment for me.  I have no idea how many twitter followers I have and I don’t read the stats for how many people visit the website.  It’s about content and connection.

I am not sure people realize how dedicated you are to these new channels.  You have a heart-felt video talking about people posting spoilers to your blog.  On TV, you appear to be the alpha dog when it comes to controlling the contestants.  Online, that is obviously much more difficult. What are the big challenges you face in trying to both create online content and build community?

For me it is simply about authenticity.  There is so much hyperbole online that I know I can’t compete.  Everybody vying for our attention.  Celebrities are the worst. So instead I am just posting stuff that interests me.  I am ignoring the pressure that I can sometimes feel to always post new stuff or to “please” people.  You will never win that battle.  I just don’t have the time to monitor it all day.  For that reason alone it will never be a huge site.   But as I said, as an experiment, really fascinating.
Can you also comment on your hope that your blog can grow into a broader discussion forum? How do you measure success in this case?

Great question.  Not sure how you measure success.  If you have a dialogue with one person and that impacts your life or theirs; does that equate to success?  If you interact with millions and discuss the best cup of coffee does that equate to success?  I really don’t know.  I’m a neophyte.  I do believe a global conversation will be had in the near future and I hope to be involved in some way.

When you are on location how much time or thought goes into ancillary content and future social media concepts/angles?  How has that evolved or changed in the last few years?

This will be the first time on location with my website, so we’ll see!  I’ve done behind the scenes over the years.  The reason for those was two-fold.  Give fans more insight and give young producers the chance to prove themselves.

Can you talk a little bit about philanthropy and the extent to which your Survivor experience has informed your awareness/concern?

I’ve been involved in many organizations including EGPAF and St. Jude’s.  A few years ago I founded my own non-profit,The Serpentine Project, to help foster youth.  We just merged with The Alliance For Children’s Rights.  It’s been a great journey and a very powerful experience.

How many hours a week have you been spending online dedicated to various projects?

What do you love about Survivor?  What has kept you at it?

The study of human nature.  It’s endlessly fascinating to me.  Why we do what we do.  Justifying our ethics.  All of it.  I learn so much about myself through others.

Do you have any specific regrets over 22 seasons about your own performances?

I always try to move forward and learn from each situation.  There are many things I could have done differently over the years but it’s a live, unscripted show.  You prepare for what you think might happen, do your best and try to learn from it.

While I have you on the spot, a truly pressing question. Over the years you have settled on an incredibly awkward gesture in conjunction with “Survivors ready…Go!”  It is this strange double armed thing where you always look like you aren’t quite sure that you are going to get it right.  What gives?  How about waving a flag or no gesture at all?

Very fucking funny.  Finally somebody said what I’ve been feeling for years.  It all started on episode one, season one when I had to let the first group of Survivors know when to start a challenge.  They were way out in the water and so I threw up my hand and dropped it as a signal.  It stuck.  Not my greatest idea.  Then again had I known we’d be on 12 years later I might have chosen a different wardrobe too!