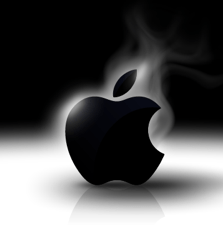 It’s that special time of the season, when Apple fans and investors alike get to gloat over just how much money the tech giant in Cupertino is raking in: Quarterly Earnings. The company had a blockbuster Q1 — will it be able to continue its winning streak?

Apple just pushed its press release detailing the stats for this quarter. It reports $24.67B in revenue and $6.40 EPS, beating the street consensus of an Earnings Per Share of $5.36 on $23.34 billion in sales. Apple’s (typically conservative) guidance was $22.00 billion in sales and a $4.90 EPS.

Apple bested expectations for its iPhone and Mac sales, which were around 16.25M and 3.6M units respectively. But the iPad tally is underwhelming (analysts were looking for 6.3M sales). Apple may explain the weaker sales during its earnings call — it’s possible this is related to the fact that some customers waited for the impending release of the iPad 2, which is still routinely out of stock at Apple stores. iPod sales continue to decline as the product is overtaken by iOS devices (though Apple still sold 9.02 million iPods).

Apple’s earnings call will begin at 2PM PST. We’ll be updating this post with more once the call begins.

2:03M PST – The call is beginning. Apple CEO Steve Jobs (who is on medical leave) was not announced at the beginning of the call. Sounds like CFO Peter Oppenheimer and COO Tim Cook will be leading the call.

Q&A
(note: there are a couple answers that we didn’t catch)
Q: Comment on supply chain disruption from earthquake in Japan.
Tim Cook: Japan in general… It’s an incredible tragedy. Apple has a history and ties with people in Japan. Regarding business, had some rev. impact Q2, but wasn’t material… expecting 200M less in Q3 which is reflected in guidance. Not expecting supply or cost impact. We source hundreds of items from Japan — the earthquake and tsunami and nuclear crisis caused disruption for suppliers. But Apple employees have been working around the clock with supplier partners in Japan, have number of contingency plans. Partners in Japan have displayed “incredible resilience”. Do not anticipate any material impact to component/cost in Q3, but situation remains uncertain. Difficult to predict whether issues will impact rev beyond Q3.

Cook: Demand on iPad 2 has been staggering. Heavily backlogged. Extremely pleased with progress of manufacturing rollout. Adding 13 more countries next week… will produce very large number of them for the quarter.

Q: Color on what drove iPhone strength in the quarter?
A: We did well everywhere on iPhone. In US grew 155% year over year. Adding Verizon was key. AT&T did extremely well during the quarter. Continued to be on a tear in China.

Q: LTE phones — how do you think about maturity of those networks, Apple’s sense of urgency there?
A: Was asked when launched iPhone with Verizon. I still think this is the case today: “The first genration of LTE chipsets force a lot of design compromising with the handsets and some of those we are just not willing to make. We are extremely happy with the iPhone 4 and iPhone 3GS.

A: Several international countries are very portable focused (laptops). See popularity in both iMac and portable, believe great future for both..

A: iPad seems to be creating halo effect for the Mac. 28% Y/Y versus worldwide market of PC contracting 3%.. it’s astonishing.

Q: Regarding iPad constraints, when will channel inventory be where you need it?
A: Confident we’ll produce a “very large number” for the quarter. Whether it will be enough to meet the staggering demand, I don’t know.

Q: Can you talk about CDMA phone and markets you may go with that?
A: On carrier side, don’t want to get into specifics about CDMA or GSM.. but we are constantly looking at where we can bring on incremental partners. Brought on 3 large ones this quarter.

Q: Similarities between Android and Mac/PC rise…?
A: Comscore reported iOS outreaches Android by 59% in US. We’re gaining traction in enterprise. “what appear to be fewer than 100” apps on Android. We’ve paid over $2 billion to developers; 10 billion downloads. Business proposition is very strong. We believe Apple’s integrated system is the way to go.. compared to Android’s
multiple OSs on multiple devices with different screen resolutions and multiple app stores. “Turns customers into systems integrators”.

Cook: Going to use what was learned in China to expand to other markets. I think considerably more than half of China is prepaid. I think the first digit is a 9 there.

Q:How closely had Steve stayed with decision decisions?
Still on medical leave. Still see him on a regular basis, he continues to be involved in major strategic decisions. I know he wants to be back full time as soon as he can.

Aren’t giving out breakdown of iPad vs iPad 2. K-12 is more conservative than enterprise than adopting new technology. Last quarter 1:1 ratio of iPad to Mac.

A: Won’t give out number for new iPhone users vs people buying a second/third etc. iPhone.

A: We don’t typically buy in spot market. Beyond Q3, it’s tough to see that far. But feel very good for Q3.

A:iPad today is subsidized in a few markets — Korea, Japan, couple European countries. But vast majority of people using iPad on 3G do so on pay-as-you-go plan. Carriers can do that but many customers prepare pay-as-you-go.

Q: Hard for us to comment on gross margin changes Y/Y.

A: We are Samsung’s largest customer, they’re a very valued component supplier to us. I expect the relationship to continue. We felt the mobile communications division had crossed the line. Tried to work it out, but decided they had to rely on the courts.

Here’s an excerpt of the press release:

Apple® today announced financial results for its fiscal 2011 second quarter ended March 26, 2011. The Company posted record second quarter revenue of $24.67 billion and record second quarter net profit of $5.99 billion, or $6.40 per diluted share. These results compare to revenue of $13.50 billion and net quarterly profit of $3.07 billion, or $3.33 per diluted share, in the year-ago quarter. Gross margin was 41.4 percent compared to 41.7 percent in the year-ago quarter. International sales accounted for 59 percent of the quarter’s revenue.

“With quarterly revenue growth of 83 percent and profit growth of 95 percent, we’re firing on all cylinders,” said Steve Jobs, Apple’s CEO. “We will continue to innovate on all fronts throughout the remainder of the year.”

“We are extremely pleased with our record March quarter revenue and earnings and cash flow from operations of over $6.2 billion,” said Peter Oppenheimer, Apple’s CFO. “Looking ahead to the third fiscal quarter of 2011, we expect revenue of about $23 billion and we expect diluted earnings per share of about $5.03.”