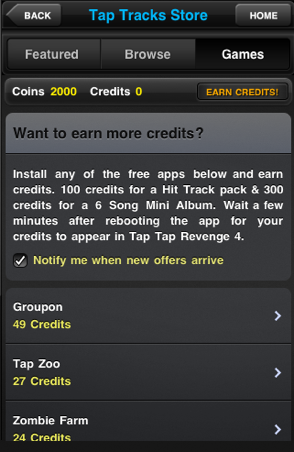 Bad news for Tapjoy, Flurry, and numerous other mobile advertising platforms that cater to iOS developers: Apple is clamping down on incentivized downloads. In other words, it’s now much harder to buy yourself popularity on the App Store. Developers who submit applications with these offer walls are having their applications rejected, on the grounds that they are violating section 3.10 of the developer guidelines (printed below).

If you’ve used many iPhone apps, there’s a good chance you’ve come across an incentivized download offer. These usually say something like “Install one of these apps, and you’ll get ten free gold coins!”, giving you a chance to acquire whatever virtual goods or currency you’re after without having to shell over real cash. And the process is as easy as they come: tap on one of the promoted applications, download and install it, then open it once, and you’re ten gold coins richer.

It’s a win-win situation for developers. The application that’s being promoted pays a fee to Tapjoy or one of its competitors, and the application that features the offer gets a cut. But these offers have apparently caused headaches for Apple.

Incentivized app installs are used on such a large scale that they are likely impacting the coveted Top Apps listings — pay a lot of money for a bunch of promotions, and you may be able to get your app in the top 10 on launch day. Hitting those lists leads to a huge surge in downloads that can make the initial promotional investment well worth it. In other words, they give well-funded developers a way to nearly guarantee traction (at a cost).

Apple also probably doesn’t like these systems because it doesn’t get a cut. Unlike in-app purchases, for which Apple gets 30% of every transaction, all of the money in these systems changes hands behind the scenes, between the developers and offer distributors.

Apple’s clampdown is a big deal because incentivized downloads have become a big business, and plenty of big-name iOS developers have integrated incentivized downloads into their applications, including Tapulous (maker of Tap Tap Revenge), Groupon, Playdom, and Pinger (which has a massively successful free texting/voice app). Tapjoy just raised $21 million, and there’s little doubt the success of their system played a big part in that.

It’s no coincidence that the news comes just a day after reports that Apple is now using different algorithms to decide how applications are ranked (and is presumably placing a higher emphasis on metrics other than downloads).

It isn’t particularly surprising that Apple is shutting this down, but the fact that it’s happening now, as opposed to months ago when these offers first took off, must be infuriating to developers and advertising platforms alike. Apple has to approve every application on the App Store, so it’s been aware of these offers from day one. And it’s not like Tapjoy and its ilk have been keeping them a secret, either.

Tapjoy says it was given no advance notice about the apparent shutdown.

Here’s Tapjoy’s statement on the news:

As you may have heard, a number of applications submitted for update have very recently been rejected from the Apple App Store based on the fact that they were running incentivized app installs within their apps. This is something new from Apple and we, along with every partner we’ve talked to, were unaware of this prior to these notices of rejection. Like many application developers, we have reached out directly to Apple and look forward to clarification.

To be clear, there is no new Apple policy that we are aware of. It seems there may be a new interpretation of the existing 3.10 clause, which is a bit surprising, as Tapjoy, AdMob, iAd, Flurry, W3i and others all power various forms of app install advertising. Many of the brands that promote their apps via Tapjoy also do the same on other major ad networks across the mobile advertiser ecosystem, and all of the apps we promote on iOS are Apple-approved. 3.10 reads:

3.10: Developers who attempt to manipulate or cheat the user reviews or chart ranking in the App Store with fake or paid reviews, or any other inappropriate methods will be removed from the iOS Developer Program

Unfortunately, we believe much of this is caused by misconceptions around pay-per-install, the free-to-play model, cross-app promotion and their collective value to the ecosystem. We believe there are significant benefits to the advertiser (only pay for what you get), the publisher (monetize users who otherwise wouldn’t pay), and perhaps most importantly to the users, who not only get to discover new, exciting applications, but receive what is essentially a coupon for ad-funded virtual currency inside one of their favorite apps. All of this, of course, adds up to value for Apple as well, by creating a viable and thriving ecosystem.

Tapjoy has been and continues to be very supportive of the Apple app ecosystem, and we were not surprised about the Top Free & Paid rankings algorithm changes – we’re all for incremental changes that add to the user experience and keep the environment dynamic. But banning the largest and most effective channel for application distribution, engagement and monetization has a significant and long-term negative impact on the user experience, developer innovation and advertiser utility.

As the market leader in application distribution and monetization of free-to-play games, Tapjoy is currently coordinating with a number of our developer partners, as well as others in the market, to get a clear understanding of the issues and to continue to partner with Apple to meet their needs, along with those of app advertisers, developers and users.