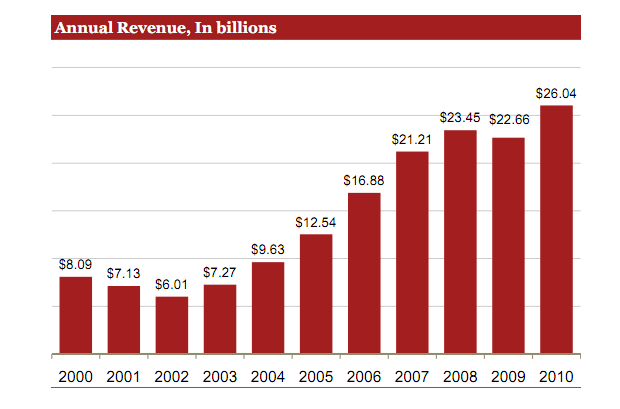 The Internet Advertising Bureau released its numbers for 2010 (PDF). Last year, online advertising in the U.S. grew 15 percent to $26 billion. After a 3 percent dip in 2009, growth resumed in 2010, hitting a record high. Industry revenue in the fourth quarter alone hit $7.45 billion.

Search still made up 46 percent of that total, followed by display ads at 38 percent.But display advertising grew twice as fast as search (24 percent growth versus 12 percent). Search advertising in the U.S. totalled $12 billion, with display closing the gap at $9.9 billion.

Video advertising (which is counted as part of display) now makes up 5 percent of the total. It jumped 40 percent to $1.4 billion. This was also the first year that the IAB is estimating mobile display advertising revenue between $550 million and $650 million.

Compared to other forms of advertising, Internet advertising surpassed newspaper ads in the U.S. last year ($22.8 billion) and is now second only to TV ($28.6 billion)

Here is the breakdown below 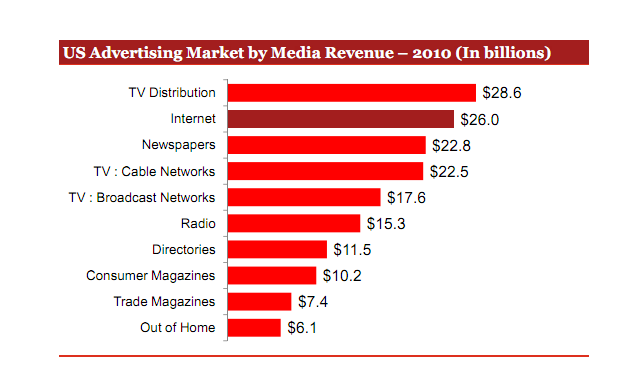