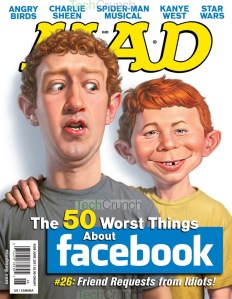 Mark Zuckerberg has finally joined the ranks of Richard Nixon, Bart Simpson, Barack Obama, and Thom Yorke, all folks who have been honored as some of the few celebrities to grace the cover of everyone’s favorite potrzebie title, Mad Magazine.

The cover [Click to embiggen] will complement what will probably be a horribly unfunny piece on the inside of the magazine entitled “The 50 Worst Things About Facebook” and will grace newsstands in about a week.

What’s interesting, I think, is that Mad chose Zuckerberg as a cover-boy at all. While always topical and up-to-date (I remember reading “articles” about Spiro Agnew back when I was a kid and having no idea who he was aside from the fact that his name was an anagram for something dirty), placing a someone who is essentially a business person on the cover is an interesting move, especially for a title that describes itself as “Greasy Kids Stuff.” Obviously Facebook is big with the kids, but how many would know the founder on sight?

I asked Mad’s editor John Ficarra to explain his actions.

Ficarra: It was a pure business decision. We got a cool $2 mil from the Winklevoss twins to “poke” him a new one.

TC: What is Mad doing in terms of social media? Do you have a MySpace page?

Ficarra: We don’t have a MySpace page, but we have a very heavy presence on Friendster. Plus, you can usually find us every night…late into the night…on Chatroulette. That’s us with the Zorro mask and the SuperSoaker.

TC: Where is your iPad app? What’s the hold up?

Ficarra: We have a GREAT MAD app! It’s for the Zune and it’s available exclusively at Circuit City. Check it out!

TC: It is my understanding that Mad writers aren’t particularly intelligent. Who spelled Zuckerberg’s name for you?