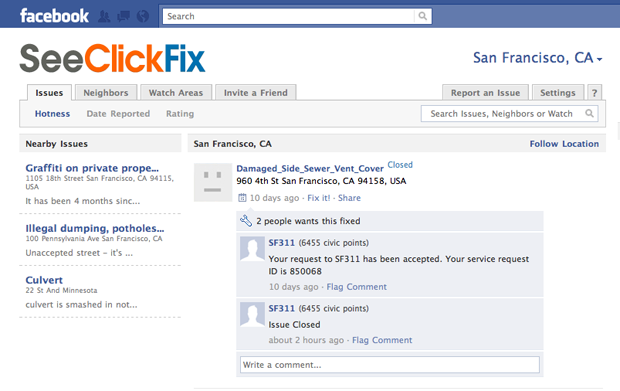 The Omidyar-funded SeeClickFix, a site which helps users report and get community issues like potholes and graffiti taken care of, has launched on the Facebook platform today. For the uninitiated, SeeClickFix lets people flag non-emergency problems for local officials in over 14,000 municipalities. Founded in 2009 SeeClickFix now has over 200,000 users and over 50% of its 95,000 user-reported civic issues have been resolved.

Co-founder Ben Berkowitz tells me that he chose to move  SeeClickFix to the Facebook platform because he was inspired by the amount of people planting fake crops on social games like Farmville and thought that he could utilize that sentiment to get actual stuff done in real life.

In the same civic engagement space as mobile app Citysourced, SeeClickFix lets users view and vote on complaints based on location, report and assign issues, as well as comment on issues and view the profiles of people who report issues nearby. Right now the ability to resolve issues isn’t available on the Facebook app, but SeeClickFix is considering enabling this eventually for power users.

In addition to crowd sourcing and routing reports about civic issues to the relevant parties involved, SeeClickFix has incorporated Facebook game mechanics into its Facebook app, giving users Civic Points for performing actions that engage with the app including reporting issues, uploading an image or taking action in order to get an issue resolved.

An early sign of the new civic direction, SeeClickFix, which currently has over 30 government clients, is also planning on partnering up with city governments, allowing them to have their own branded SeeClickFix apps and widgets.