Microsoft Hotmail doesn’t get much love in Silicon Valley these days, but the service has been steadily making improvements to the product, particularly over the last 18 months or so. And today it’s giving a boost to its ‘Active Views’ product — which sets out to make email quicker and more interactive than the sort we’re used to — by adding new partners including Posterous, and LivingSocial.

Hotmail’s first iteration of Active Views involves linked content — Dharmesh Mehta, director of Windows Live, says that 90% of email contains a link to an external service like YouTube, Flickr, or LinkedIn. So when Hotmail sees that there’s a link to a YouTube video, it will automatically embed the video so that you don’t have to actually follow the link (Hotmail isn’t the only service to do this). Mehta says that this has been very effective — while only 10% of users click on a normal link to a video, 25% will click on an embedded version.

Hotmail’s more unique feature, and the one related to today’s announcement, is the second type of Active View, which launched in December. Microsoft has allowed a handful of select partners to offer dynamically updating emails, which will always present fresh content, even if the recipient doesn’t open it for days or weeks after receiving it.

The feature first launched with a handful of partners including Netflix, Orbitz, and LinkedIn, and today’s launch includes LivingSocial and Posterous. Posterous CEO Sachin Agarwal showed me a demo of their integration, and it was pretty slick: every time someone submits a new post to Posterous, that post gets distributed via email to their subscribers. Before now that email would omit comments — you’d have to click through the post to see if there was any discussion. But using Active Views, Posterous can display the most current comment threads as soon as you open the email, and you can even submit a comment directly from your inbox.

As for the earlier integrations with Orbitz and LinkedIn, Mehta says that partners are learning that it’s best not to simply try to recreate their websites in the inbox, but to rather hone in on the functions people will be most likely to want. In other words, they’re still figuring out what works.

Of course, these dynamically updating emails are still only available to select partners, which was one of my original critiques of the product. Mehta says this is for security reasons (each partner is vetted, has to be white-listed, etc), but says that ultimately he hopes that Active Views will be integrated into other email providers, and that it will be available more broadly to senders. 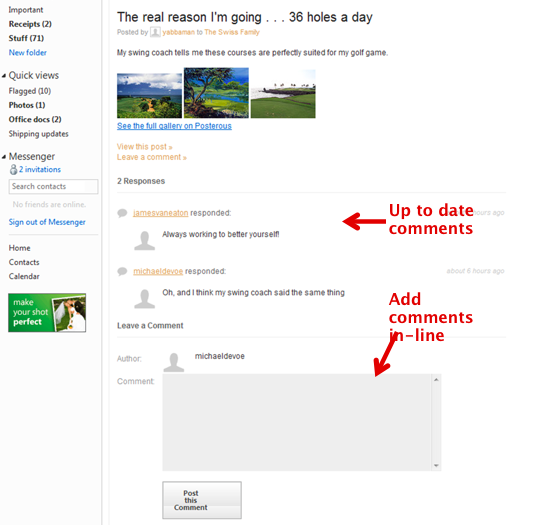